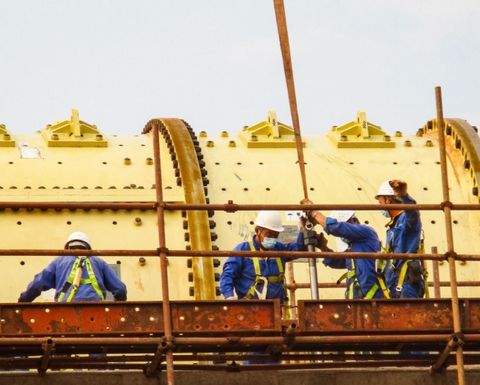 Ivanhoe and partner Zijin Mining are aiming for first production in July at the project in the Democratic Republic of Congo, and Friedland said they had already sped up a phase two expansion, aiming to take annual production to 400,000 tonnes or 880 million pounds per year starting in the third quarter of 2022.

"Our improved capital position now opens the distinct possibility of earlier development of the phase three expansion, which would bring copper production at Kamoa-Kakula up to approximately 530,000t, or approximately 1.2 billion pounds per year," he said.

The company said fast-tracking hydropower upgrades in the DRC was a high priority, to ensure renewable energy for subsequent expansions at Kamoa-Kakula.

Its management team also was evaluating a potential direct-to-blister smelter which could bring "numerous economic benefits and further reduce the project's Scope 3 emissions".

Ivanhoe expected sale agreements for Kakula's phase one concentrates to be concluded in April.

The company was also reviewing options to accelerate its already-planned $16 million exploration programme at its wholly-owned Western Foreland licences near Kamoa-Kakula.

"We are highly confident that we have the secret sauce for additional exploration successes in our backyard," president and CEO Marna Cloete said.

Still in the DRC, Ivanhoe said it was continuing discussions with joint venture partner, state-owned Gecamines, about redeveloping Kipushi and expected to agree development and financing plans mid-year.

Ivanhoe was also considering accelerating sinking Shaft 2 at the Platreef mine in South Africa, where it was currently proceeding with the changeover for Shaft 1 to become the initial production shaft.

The work was fully funded by the $420 million financing package announced last month.

Ivanhoe shares have trebled over the past year.