A barrage of policy-easing moves by China this week, aimed at swerving a hard landing for its slowing economy next year, are unlikely to move the needle for copper in the short term so long as refining and logistical snarl-ups persist. 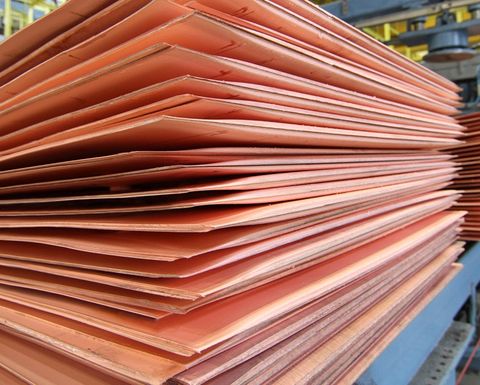 The People's Bank of China said on Monday that it would shave reserve requirements - the amount of money that banks and financial institutions must set aside - by half a percentage for almost all banks next Wednesday.

The central bank's move is expected to release about RMB 1.2 trillion ($188 billion) into the world's second-largest economy, with the hopes of spurring lending and business growth. Hours after the announcement, Chinese Premier Li Keqiang said the country would meet its major economic targets for this year and that it would weather short-term economic volatility.

The moves and talk are in keeping with other signs that China's policy environment is loosening as authorities look to keep economic headwinds at bay.

"Despite successful efforts to alleviate energy shortages, the fine-tuning of overly aggressive property curbs and some stimulus measures for the green sector, we expect China's economic growth to weaken further," Ting Lu, chief China economist at Nomura, said in a report on Friday. "We could see a continued deterioration in the property sector, property indices, governments' fiscal conditions, the economy and the financial sector."

The slump in the Chinese property sector - estimated to account for as much as 29% of the country's GDP - has been dramatic, but there are early signs that the situation is stabilising. Some Chinese property developers have started to repurchase overseas bonds, while some investors have started to buy dollar bonds issued by local homebuilders as home sales, land purchases and financing channels for developers have normalised, the central bank said last week.

The endgame for Evergrande Group, the embattled developer at the heart of China's property downturn, is in sight too after it was officially declared a defaulter for the first time on Thursday. A massive restructuring awaits Evergrande, which some observers say could lift an overhang over Chinese property by clarifying risks built up by the company.

Copper prices have remained robust despite the slowdown in China's property construction, supported by a steep fall in visible copper stocks - especially in bonded warehouses.

LME copper futures remain in wide backwardation, although the spread between copper for immediate delivery and copper for delivery in three months has receded from October's record peak of more than $1,000 per tonne.

The continued backwardation has prompted Chinese copper smelters to commit to boosting exports, in order to profit from the wide LME backwardation. But this has yet to be reflected in customs data, and various logistical constraints caused by Covid lockdowns at ports may constrain the ability of smelters to export.

China's refined copper output has slowed on a build-up of sulphuric acid stockpiles and power rationing. Domestic refined copper production has been soft with this year's output failing to match last year's peaks. Output has slipped in the second half of this year and fell by 5% year-on-year in October.

The production decline appears to be more to do with China's electricity rationing measures than any issues with copper concentrate supply, as gross concentrate imports and domestic supply have been steady. Arrivals of copper concentrate climbed by 21.9% from October to a record high of 2.19Mt in November, according to official customs data released on Tuesday.

China has been restricting the power consumption of highly energy-intensive industries since June to reduce carbon emissions, hit energy conservation goals and reserve electricity for households this winter. The power cutbacks have not disrupted copper smelters as their operations are not energy- or emissions-intensive, but chemical manufacturers have been impacted - particularly those in Jiangsu province, which neighbours Shanghai in eastern China.

The power constraints have slowed purchases of sulphuric acid, one of the chemical industry's most important feedstocks. This has triggered a decline in acid prices and increased acid inventories at smelters - forcing some facilities in the Yangtze River Delta region, which includes Jiangsu, to slow down operations.

The build-up of sulphuric acid has exacerbated the traditional seasonality in the market, when acid offtake from smelters declines in winter. While power rationing measures have eased somewhat since November thanks to improved coal supply, they are set to remain in place as Chinese authorities look to minimise air pollution ahead of the Winter Olympics in early February.

This indicates smelters will continue to wrestle with large acid stockpiles, which could potentially affect up to one-fifth of domestic copper concentrate demand.

Besides chemicals, the power usage curbs have weighed on copper refining. This has combined with a shortage of blister copper imports - due to logjams and cargo backlogs at Chinese ports because of COVID lockdowns - to reduce copper cathode production. The sense is that there are no short-term fixes for these issues, especially while China continues to battle increasingly frequent Covid outbreaks and ration power to industries.

This means Chinese copper output will continue to decline steadily this winter, limiting domestic copper supply and forcing companies to turn to inventories. This has already been reflected in the rapid decline of copper stocks on the Shanghai Futures Exchange and bonded warehouses, which are the most accessible. Refined copper stocks in Shanghai bonded warehouses fell by 17% in November to stand at a record low of just under 170,000 tonnes.

At the same time, analysts say it is reasonable to assume China's apparent copper demand has slowed given the property slowdown and ongoing power rationing. The power sector accounts for 43% of copper end-use in China, followed by the manufacturing of air conditioners and refrigerators on 20%, and the property sector with 15%, according to SMM.

Reduced copper demand from the property sector, which uses the red metal for electrical wiring, has been reflected in the operating rates of wire mills, which fell by 3.9% in October. Construction activity also slows in winter as weather in northern China becomes too cold for outdoor work. Industry media in China have reported fewer orders for copper wire from the property sector and frequent defaults on orders, resulting in a build-up of copper wire and cables at mills.

A revival in the Chinese property sector will be essential for copper's prospects in 2022. After Beijing's unprecedented property curbs, regulators appear to be fine-tuning their policy stance on the sector.

A memo published on Monday that summed up a recent meeting of the Politburo - the Communist Party's top decision-making body - indicated a change in tact, as it stated authorities would support the private housing market to "better meet reasonable needs".

Nomura analysts interpreted the phrase to mean that Beijing will shift away from simply imposing restrictions and curbs, to boosting land and housing supply in booming cities with rising inflows of migrant workers and college graduates. "If this materialises, it could be a positive piece of news as it might correct many of those market-distorting curbs," said the analysts.