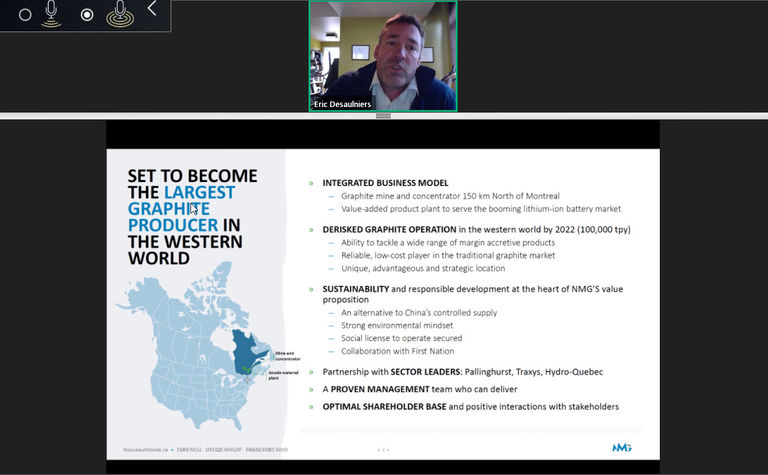 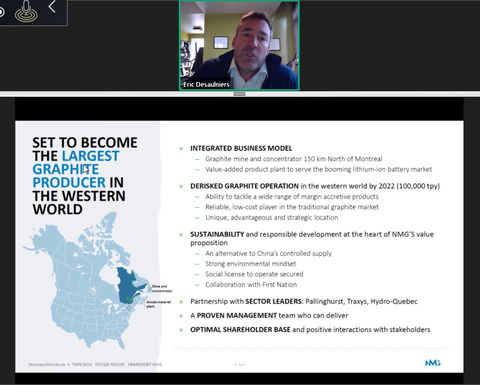 He sees the COVID-19 pandemic as intersecting with the Nouveau Monde value proposition in that it is the most advanced large graphite project in the Western world, ready to plug into a market impacted by a critical lack of resilient supply chains.

Desaulniers said during a web-streamed presentation engineering, permitting and development was advancing on plan via telework. While the company is tightening the purse strings for the time being, Desaulniers was optimistic the Quebec and even federal governments could provide further strategic supports for projects such as Matawinie as levers to pull to stimulate new economic activity amid the downturn.

Desaulniers said he had received provincial government assurances earlier this week that permitting remained on schedule for a summer-time decision, with construction of the commercial-scale operation to follow soon after.

Matawinie is set to become the largest graphite producer in the Western world at 100,000tpa, augmenting current demonstration plant production of about 2,000tpa of concentrated flake graphite.

"The public portion of the permitting process is completed, and if COVID-19 had to happen, better for us now while we prepare for construction," he said. "The pandemic exacerbates the need for resilient supply chains."

The asset is timed to come online during an expected sharp increase in graphite demand on the back of the electric vehicle revolution. Commercial production is targeted for 2022.

The rapid growth in the EV market continues, with Benchmark Mineral Intelligence estimating graphite demand to grow 480% by 2029 to support battery production capacity of about 2,151.5GWh.

"This is the opportunity at our doorstep. There is no other anode material facility outside of China. With 553GWh of battery capacity being built in US and Europe, we can plug directly into that and gain market share," he said.

China accounts for about 67% of global graphite supply, followed at 15% by India, 9% from Brazil and 2% from Canada. Refractory markets take 35% of the supply and batteries currently consume about 25%.

The 100,000tpa operation expects average sales prices of $1,730/ over the 25.5-year mine life, with operating expenditure pegged at $382/t. "This demonstrates robust profit margins," Desaulniers said.

Matawinie premium flake products are expected to fetch a premium on the market, with 20% of the resource distribution being jumbo flakes, and 32% large flake. Production is expected to be 97% carbon purity.

Of the graphite output, 40% is destined for traditional markets, and 60% destined for the value-added products markets, which the company will target via its proposed spherical graphite plant.

The Nouveau Monde has assembled a team of skilled experts in graphite mining and processing thanks to previous nearby major operations by IMERYS and SGL.

"Matawinie will probably be the next big graphite project to reach permitting in the world. It will be the world's first all-electric openpit mine, with lower operating costs and a smaller environmental footprint," said Desaulniers.

The company had recently signed an offtake agreement with mine-to-market specialist Traxys for two years on the demonstration plant and for 25,000tpa from the commercial operation. Traxys had joined forces with Pallinghurst Group in a $2 billion battery materials fund, and investment in the Matawinie vertically integrated setup was the first to flow from that partnership, Desaulniers said.

In the Western world, Mason Graphite has the other most advanced project, but Nouveau Monde's active demonstration plant is the main differentiator, since it is already selling product on the market and providing samples to prospective customers.

The company enjoys strong institutional backing, including from Quebec government investment vehicles, with the aim of positioning the province as Canada's battery production hub.

The company (NOU:TSXV) has about 262 million shares outstanding and as at the end of September last year, had C$9 million cash on hand.