South Africa’s mining production fell 11.6% year-on-year in November, according to the latest figures from Statistics SA, and Russian investment bank VTB Capital said it did not expect to see a significant recovery in key sectors in the following months. 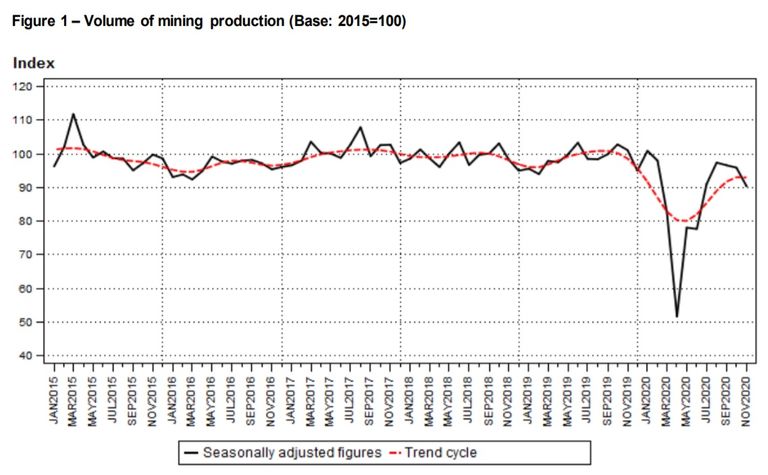 There has been an upward trend in production since the 47.3% yoy plunge in April 2020 caused by the country's COVID-19 shutdown.

Seasonally adjusted mining production increased by 6.3% for the three months ended November, compared with the previous three months, led by a 13.2% rise by the gold sector.

However month-on-month, seasonally adjusted mining production was 5.7% lower in November than in October.

VTB Capital head of metals and mining research Dmitry Glushakov said he did not expect to see a resurgence in either gold or PGM production in South Africa in the following months.

"The decrease in output might be caused by lockdown in some of South Africa's export markets as well as by some of remaining restrictions in the country," he said.

"However, we do not expect a significant recovery in country's PGM mining output in December-January as the country started to impose COVID-19-related measures at the end of December amid a significant increase in new cases."

In terms of mineral sales, Stats SA said these had increased by 15.1% year-on-year in November, thanks to a 37.6% jump by PGMs which contributed 11 percentage points to the change.