Abitibi gold explorer Enforcer Gold Corp (TSXV: VEIN) will be looking to re-ignite market interest in its Montalembert exploration story with new drilling after its recent campaign on OR79 zone identified last year created a brief flutter of interest this week. 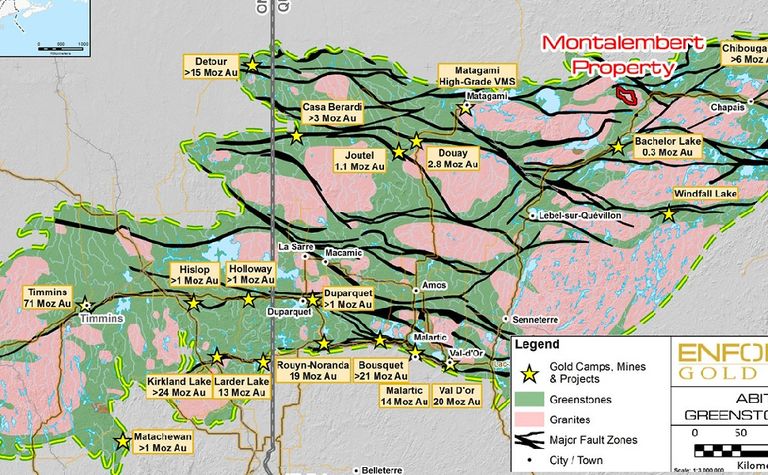 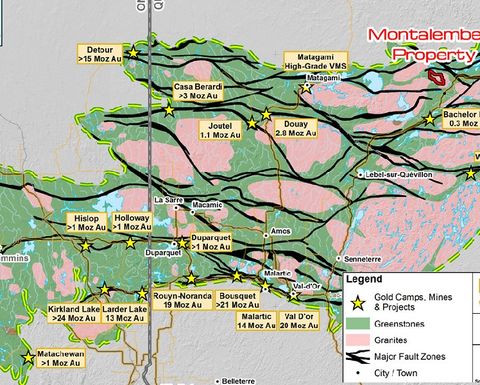 President and CEO Steve Roebuck said this week the 18 core holes (for 1,749m) drilled on OR79 in February-March this year confirmed two north-south trending mineralised corridors defined by the presence of multiple 0.3-1m-wide mineralised intersections grading up to 5.09 grams per tonne gold over 0.65m.

Enforcer reported the mineralised intersections were primarily hosted in weakly to strongly sheared gabbro accompanied by quartz veining and/or 1-15% sulphides (mainly pyrite and pyrrhotite and trace chalcopyrite, sphalerite and molybdenite).

The company said a follow-up program was "under consideration and may include drill testing at depth below the current vertical reach of 75m".

"OR79 is a new gold occurrence on the Montalembert property discovered by our prospecting team in 2017," Roebuck said.

"We followed up with an IP survey to better define drill targets and were highly encouraged with the results that showed a prominent high chargeability and resistivity anomaly over the discovery area and a second IP anomaly further to the east.

"We've now completed a successful first-pass drill testing of the area, which has confirmed two distinct corridors with numerous mineralized horizons that trend sub-parallel to the Galena-No. 2 veins located 1-1.5km to the east."

Enforcer hit C8c intra-day Thursday before finishing the day down 7.14% at 6.5c. The C$4.19 million market-cap company was trading at 23c last May.