Toronto-listed Fura Gems is trying to be its own company, despite being run by veterans of the Pallinghurst Resources subsidiary Gemfields and focusing on the same countries. 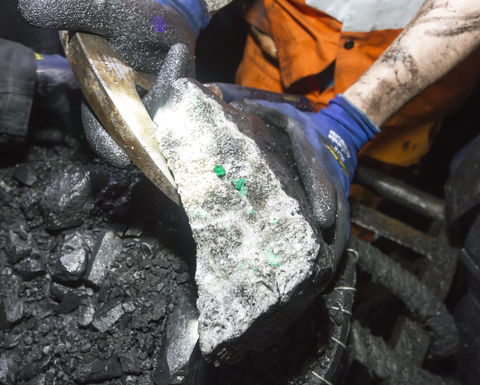 Despite the mine's long history, Fura is only now mapping Coscuez's tunnels and orebody

The company's CEO, Dev Shetty, left Gemfields in 2016 and since starting Fura has bought the Coscuez emerald mine in Colombia and taken plots near his old employer's Montepuez mine in Mozambique.

Shetty told Mining Journal this month he understood the comparisons but promised a more toned-down approach.

"Our vision is very clear. [While] a lot of people are saying, 'you're creating one more Gemfields', I say no," he said.

"What we are trying to focus ourselves on is, we are building an employee-friendly, sustainable development, and community-centred business."

One clear goal is avoiding a messy takeover like Pallinghurst's move on Gemfields.

"I've learnt from the past, don't have one shareholder owning 77% of the business," Shetty said, offering proof in the form of Forbes and Manhattan diluting down from majority shareholder to 32% owner.

Shetty moved over to Colombia in 2014 for Gemfields after running both the Montepuez and Kagem mines, and has picked the historic Coscuez mine as a focus for his own company, and completed the deal for 76% of it in January for US$10 million over three years.

Fura has not wasted its time there, already starting a 30,000t bulk sampling programme and after completing a 3D survey at the project.

The sampling has already led to the unearthing of a 26-carat stone the company called the ‘ÄRE emerald' and more detail on the shale orebody will come from a drill programme starting this month.

The CEO said the current testing was showing 7ct per tonne in the orebody, but expected this to fall to 2ct/t when the final numbers are reached.

Shetty said a resource for Coscuez would be completed in October.

In Mozambique, the team has found an alluvial source of its own - picking out 10kg of rubies "just lying on the ground" - and will soon start pilot mining following a drill programme which will give a better indication of how to tackle the ambhibolite bodies on the sites that would provide the high-volume, lower-grade rubies.

To get to the bulk sampling stage in Colombia, Fura has had to work with the region's famous (formerly infamous) artisanal miners, the guaqueros.

Shetty said the offer of wages, insurance and a pension was attractive enough to the local workers, who he said were "so talented, so skilled", and Fura has employed 240 people at Coscuez.

Extreme violence in the area has disappeared since the emerald battles of the 1980s, but there is some frustration at companies like Fura coming in because of the more efficient processing techniques they bring: this means there a fewer leftovers for artisanals.

The Economist quoted an elderly guaquero earlier this year as saying the companies in the region were "mosquitos" who were "sucking [the artisanals'] blood".

In April, Law firm Leigh Day issued proceedings in London against Gemfields over treatment of artisanal miners at Montepuez, alleging security forces linked to the mine had "shot, beaten, subjected to humiliating treatment and sexual abuse, unlawfully detained, and/or forced [community members] to carry out menial labour".

Shetty was COO for Gemfields from 2012 to 2016 and Fura vice president for operations Ashim Roy was the general manager at Montepuez.

Leigh Day did not name any individuals in its statement of the filings, and Mining Journal does not suggest Shetty or Roy were involved in the alleged violence.

Shetty said he had always operated under UN guiding principles on business and human rights, and commented generally on the complexities of bringing commercial mining into an area.

This town is big enough for the both of us

The coloured gems market has slowed down in recent months because of the Nirav Modi scandal, according to Pallinghurst.

Jewellery designer and diamond family scion Modi allegedly found a way to use interbank transfers to his advantage alongside his uncle, resulting in a $1.8 billion loss for the Punjab National Bank.

The South African company said after its most recent emerald auction, in which only 56% of the lots by weight were sold, it was clear buyers would need some time to recover.

"Given the ensuing losses sustained by Indian banks, access to finance has become challenging or many companies in the Indian gem and jewellery industry," CEO Sean Gilbertson said this month.

The industry will likely get over this dip but the short-term demand hit is not ideal for Fura, which will put its emeralds from the bulk sampling up against those from Kagem.

Shetty said he would be happy to work with his former employer to form a marketing organisation like the Diamond Producers Association, but made clear it would be important to sell Colombian emeralds as a brand separate from Zambian stones from Kagem.

"While we're growing, if some kind of association is needed we are more than happy to come in," he said.

Some rivalry is expected, but Shetty said he would be happy to see Gemfields keep growing as long as the industry was too.

"In five years, when I become 10% [of gemstone supply], I'm pretty sure Gemfields will also grow … What is needed is, when they grow and we grow, just like diamonds, more people are coming and there's space for everyone," he said.

"As this happens, and I'm very confident, the more organised the industry is, the $2 billion [rubies, emeralds and sapphires global market] will go up to $5 billion and in that $5 billion, we want to target 15% market share.

Shetty's aims for his "community-centred business" are therefore not so humble: to more than double the coloured gems market in five years and then take a $1 billion chunk of that market.