Eldorado Gold (TSX: ELD) has found a new high-grade gold mineralisation zone at its Lamaque operations near Val d’Or as it highlighted a commitment to building value from its growing asset base in Quebec. 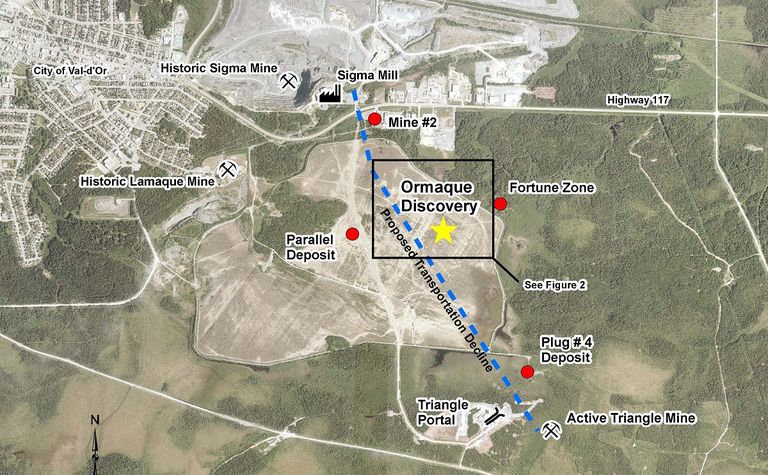 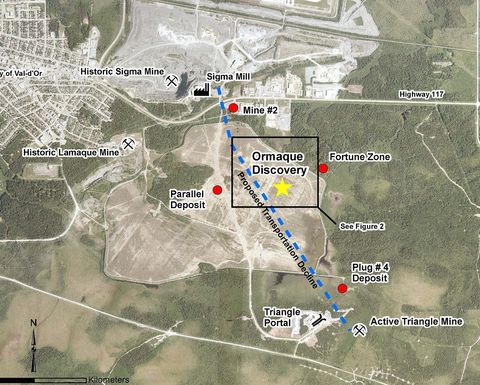 The location of Eldorado’s Ormaque discovery at Lamaque in Quebec

The company said it had received assays including 27.3m at 10.2g/t gold and 16.25m at 25.53g/t from seven of the 13 holes drilled at the Ormaque zone, a previously undrilled area midway between the historically mined Sigma and actively mined Triangle deposits.

Eldorado said it had delayed a preliminary economic assessment update for Lamaque to incorporate the Ormaque zone, which is close to a proposed 2.8km transportation decline to link Triangle and the Sigma mill.

President and CEO George Burns said the discovery confirmed "the tremendous potential we see at Lamaque" and pointed out the company had increased its exposure to early-stage exploration in the eastern Abitibi.

Eldorado last month made a C$4 million investment to take a 19.99% stake in QMX Gold, which has land north and east of Lamaque, and executed an option agreement to earn up to an initial 75% of Sparton Resources' Bruell project 35km east of Lamaque.

Eldorado also has operations in Brazil, Turkey, Greece and Romania and said this week's its 2019 preliminary production of 395,331 ounces of gold met its annual consolidated production guidance.

It plans to release its full-year results on February 20.

The company also announced this week former Goldcorp executive Joe Dick had been appointed EVP and COO to replace Paul Skayman, who was retiring after almost 15 years with Eldorado.

The company's shares have soared over the past year, from C$3.36 last January to $13.35 in September, as the prospect of long-awaited permits for projects in Greece eventuated with a change in government.