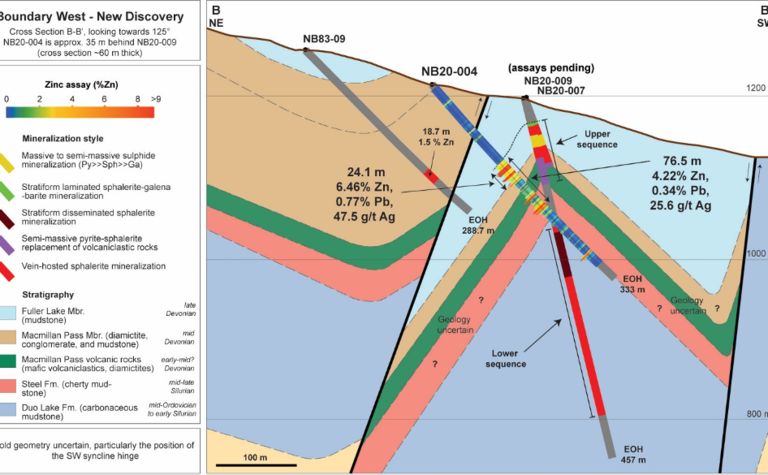 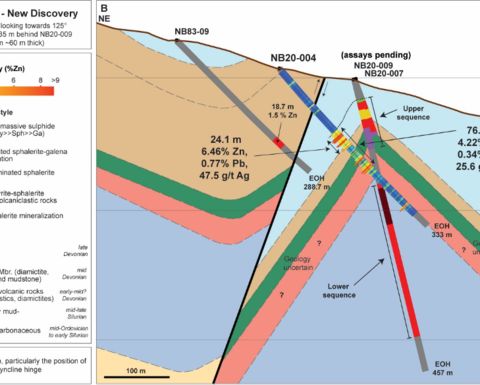 Assays from other holes are pending, including one Fireweed said had also intersected the lower mineralised sequence.

Fireweed said results pointed to similarities with known deposits at Macmillan Pass. It had intersected massive sulphides, Boundary Zone-style vein-hosted and replacement-style mineralisation, and bedded laminate mineralisation similar to that seen at Tom and Jason.

Fireweed estimates the massive sulphide intersection to have an actual thickness of about 15m, but cautions the veins' stockwork nature means they pinch and swell on a centimetre to metre-scale.

Fireweed has not yet published an initial resource estimate for Boundary Zone, but says the deposit should be amenable to openpit mining with a low strip ratio.

Tom-Jason hosts indicated resources of 1.6 billion pounds grading 9.61% zinc-equivalent, with another 4.91Blb inferred at 10% Zn-eq. Fireweed's 2018 PEA - sans the new discoveries and better metal prices - calculated an after-tax IRR of 24% and an NPV of C$448 million. Capex was put at $404 million.

Resource Capital Funds and Teck Resources are among the company's cornerstone investors.

Fireweed shares (TSXV:FWZ) gained more than 16% in Toronto to C$1.07 during the morning session before closing up 5.4% at 97c, giving the company a market value of $54 million.