Nouveau Monde Graphite has entered into an agreement with Pallinghurst Graphite for a non-brokered private placement for C$10.3 million that will see Pallinghurst take a 19.99% position in the company. 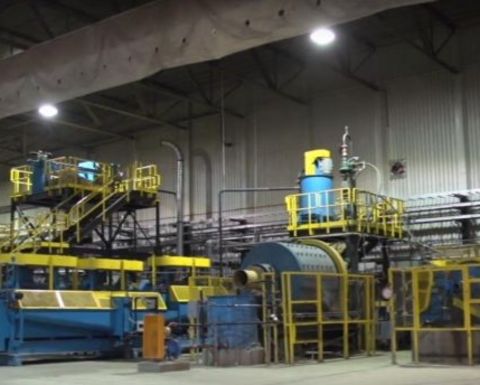 Pallinghurst Graphite, part of The Pallinghurst Group, will buy 43.8 million shares at a price of $0.235 and will have anti-dilution rights to maintain its 19.99% ownership that will continue for up to two years. It will also be entitled to appoint two directors to the board of Nouveau Monde.

Nouveau Monde also intends to complete a second private placement to selected existing institutional shareholders that will increase the funds raised to C$22 million that will provide the company with sufficient funding for its next stage of development of the Matawinie graphite development project in Saint-Michel-des-Saints, Quebec, Canada.

"The introduction of one of the world's leading mining investors into Nouveau Monde confirms the potential of the Matawinie project to become a major, world-leading producer of low cost, high-purity battery grade graphite," said president and CEO Eric Desaulniers.

The proceeds will provide Nouveau Monde with sufficient funding for its next stage of development of the Matawinie project.

In the first quarter, Nouveau Monde has continued to operate its flake graphite concentrate demonstration plant, allowing the ongoing qualification of its product with potential customers. It has also secured a binding five-year 25,000 tonnes per annum offtake and joint marketing agreement with commodity trading and logistics company, Traxys Group.

"The future demand for battery grade materials—including graphite—is set for explosive growth. The Pallinghurst Group has its exclusive focus on the ethical and sustainable extraction of battery materials. … We intend to provide the necessary equity capital and mining expertise to ensure that the Matawinie project is brought into full production. As the largest graphite operation in the Western world, Nouveau Monde is poised to become the key source of battery-grade graphite for North America," said Pallinghurst managing partner Arne Frandsen in a statement.

Nouveau Monde has completed a feasibility study for an operation to produce 100,000tpy of graphite concentrate for 26 years with an initial capex of $211 million.

Graphite is an often overlooked material in lithium-ion batteries such as those that power electric vehicles although it accounts for about 14% of battery cell mass.

Shares in the company (TSXV:NOU) closed last week at C25c, valuing it at C$43 million. Its share price has fallen 12% so far this year.

Syrah getting back on track as graphite market improves