Passenger and light-duty electrical vehicle sales have increased by 40% year-on-year in the period to June, rising above one million units, new analysis from Rho Motion shows. 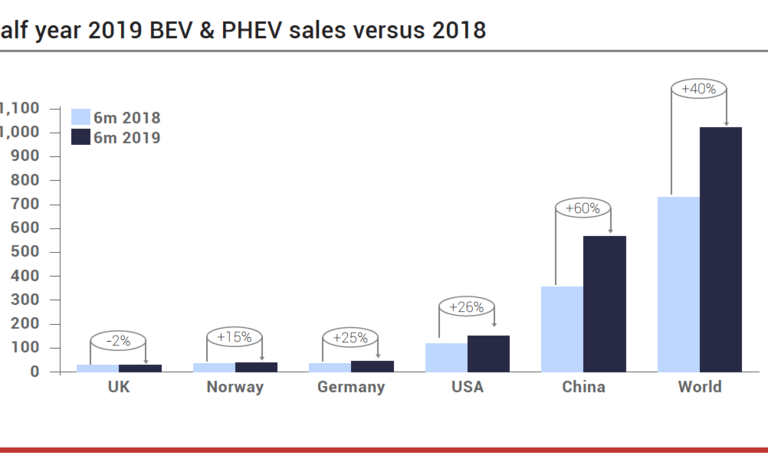 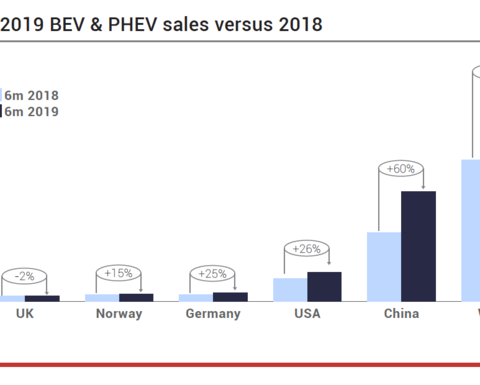 However, the impact of China's reduction of subsidies on the domestic market from July onwards on the market remains to be seen, Rho Motion managing director Adam Panayi says in a report published by Benchmark Mineral Intelligence.

"Chinese sales for the year to June are up 60% on the same period in 2018, and while the reduction in the subsidy will undoubtedly impact on vehicle sales in the short-run, we expect that this will be mitigated somewhat by lower VAT rates," Panayi says.

In assessing the emerging EV market, it is important to understand the EV market is heavily concentrated in a few key countries, with the top five markets for battery EV (BEV) and plug-in hybrid EV (PHEV) accounting for more than 80% of total sales. This suggested adoption was still lagging in most markets, Panayi suggested.

Panayi said it was reasonable to expect subsidies would be reduced further as the market gained scale, and it became fiscally untenable for governments to support an ever-increasing level of sales. "However, we do expect that incentives will persist in the form of tax rebates, and as a corollary of penalties for owning and operating internal combustion vehicles (ICE) vehicles."

The analyst expects emissions legislation, particularly at a local level, to tighten further to ease the immediate impact on public health from nitrogen oxide and particulate matter emissions. To this end, the forthcoming OEM fleet average carbon dioxide targets in most major markets seems unlikely to be met without some form of electrification.

As such there are several developments expected to play a larger role in the market in the coming years. Foremost among these are the investments being made by major auto-manufacturers for the introduction or expansion of electrification in their model offerings.

The world's largest automaker, the Volkswagen group, has been leading the field in its efforts to move towards electrification. Its strategy is focussed on development of BEVs with the release of its modular electric drive construction Kit, from which it plans to produce 50 pure BEV models, beginning with the ID-Neo in 2020. GM has also looked towards the BEV route, with its BEV3 platform from which it plans to launch 20 BEV models.

According to Rho Motion, the global split of BEV versus PHEV currently stands at 76%, and has been rising over time.

Enthusiasm for a wholesale shift to BEV is not universally shared, however. Ford, for example, is planning 40 EVs by 2022, of which only 16 will be full BEV, while BMW has designed a vehicle platform to accommodate both BEV and PHEV.

Honda has stated that while its entire model line up with be electrified by 2025, most of these will be hybrids. This hybridisation strategy was being pursued in order to mitigate issues around battery cell and raw material supply, as well as consumer acceptance and charging infrastructure roll out, Panayi said.

"In our view the longer-term strategy will remain a transition to BEV, and ultimately we expect that full-electrification will offer a lower-cost option to both the OEM and the consumer.

"According to our estimates we expect purchase price parity by 2024/25 for new BEV models, although this calculation accounts for losses at OEMs while they build scale in production of these vehicles, with profitability coming later as volumes grow."

The equivalent purchase prices for EVs compared to ICE vehicles will be the major driver of EV adoption, and the analyst expects this will prove a critical turning point in the evolution of the market.

Significant risks for EV adoption remain however, and these mainly relate to the battery supply chain itself.

"The availability of key raw materials, and the chemical processing capacity to convert them into useful products, is a key area of concern. There will need to be sustained capital investment in the upstream areas of the supply chain, in order that the much larger investments being made in battery and vehicle manufacturing are not hindered by a paucity of raw material."

This could hold up the development of commercial scale manufacturing of vehicles, Panayi said, as well as inhibit cost reductions needed to make EVs competitive in the vehicle market.

Macquarie the latest bank to raise its forecasts for lithium