The US Geological Survey’s latest Mineral Commodity Summaries report says total mining output in the USA dropped by US$1.5 billion year-on-year to $82.3 billion in 2020. 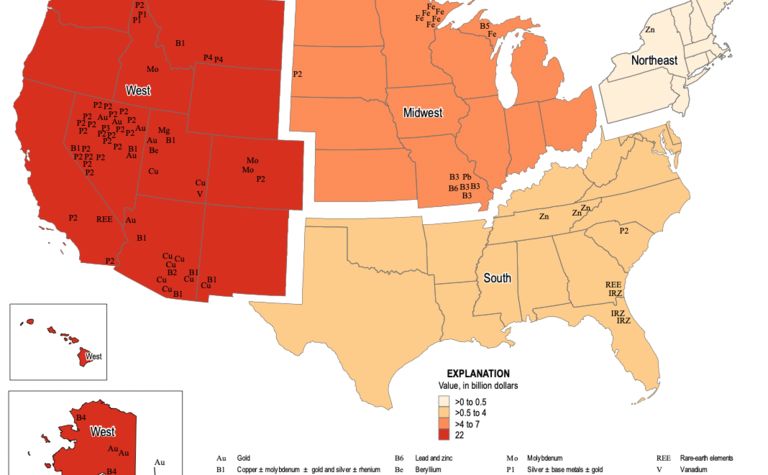 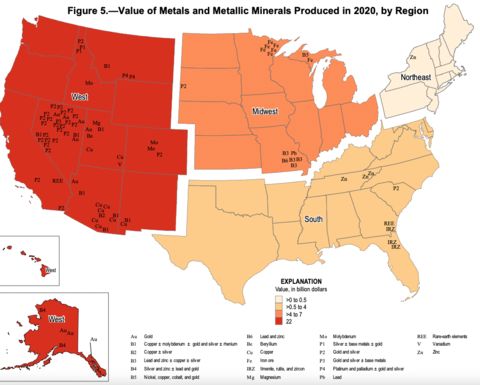 The value of metals produced by region of the USA

The fall is being put down mainly COVID-19 restructions in the June quarter last year.

The USGS report, understood to include the earliest comprehensive annual data on US mining and commodities, suggested mineral raw material net exports increased to $4 billion from $3.7 billion in 2019. Domestically recycled products totalled $28 billion, and iron and steel scrap contributed $9 billion of that.

Domestic mineral and recycled metal materials were used to produce products worth $710 billion. The raw, recycled and processed materials in turn created an estimated $3.03 trillion of value further downstream.

Higher prices for precious metals including gold, which reached a record $2,060/oz in August, contributed to 3% higher metal production of $27.7 billion. Gold (38%), copper (27%), iron ore (15%) and zinc (6%) were the main contributors to the annual increase in metal production value.

The USA relies entirely on imports for 17 mineral commodities, 14 of which are listed as critical minerals.

Domestic production of rare earth concentrates increased by 10,000 tonnes in 2020 to 38,000t, making the USA the largest producer of RE concentrates outside China for the second consecutive year.

The report noted that commodities used by the oil and gas sector, the steel industry and transportation industry were significantly affected by the pandemic in the second quarter of 2020.

As of September 30, 2020, the National Defence Stockpile of strategic and critical minerals had a fair market value of $887.9 million.