Many people in Australia have been very reluctant to make comparisons between South Africa’s Witwatersrand Basin – which has so far yielded 40,000 tonnes of gold – and an Australian twin in the Pilbara, but Swiss-born Dutch investor and founder of the Commodity Discovery Fund, Willem Middelkoop wasn’t one of them this week. 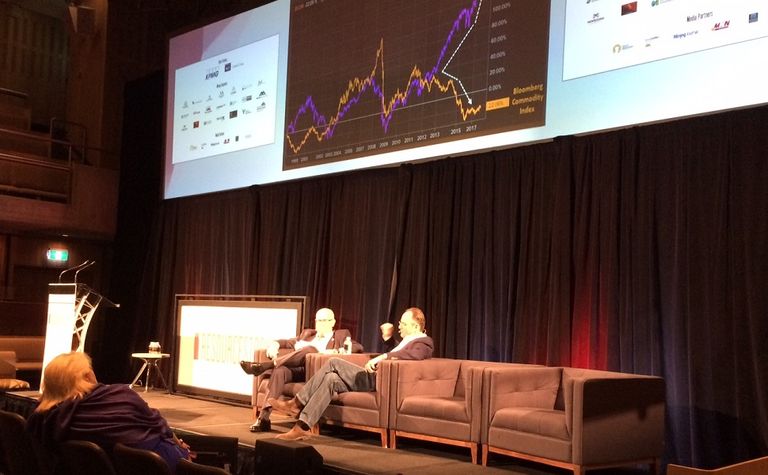 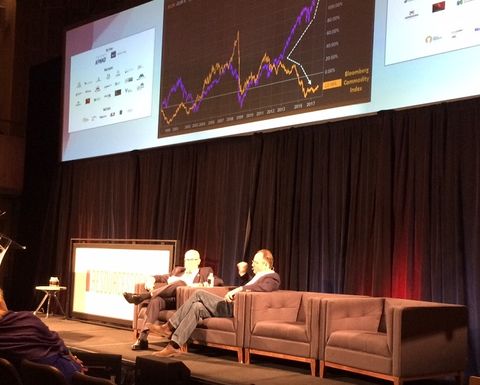 Richard Morrow and Willem Middelkoop on stage at ResourceStocks Sydney 2018

On his first visit to Sydney to speak at this week's ResourceStocks Sydney 2018 conference, the Netherlands real-estate investor, author and media commentator who got hooked on mineral-discovery investing when he made an absolute motza riding Aurelian Resources' discovery of Fruta del Norte in Ecuador in 2006, said the Wits and Pilbara systems might not be "brothers … [but] they are nephews, or nieces; size-wise they can be compared, grade-wise they can be compared … and there is a chance that the Pilbara gold system is even richer than the South Africa system because [of the size of the nuggets being found in the Pilbara]".

Middelkoop said he roamed the globe looking for another Fruta del Norte - along with the likes of exploration geologist and Aurelian co-founder Keith Barron - and his fund had sunk more than US$10 million into the Pilbara conglomerate gold story already.

"Peanuts", he says, compared with Kirkland Lake Gold and Canadian billionaire (and Kirkland chairman) Eric Sprott, who'd invested more than $150 million, but a big chunk of the Discovery fund's portfolio.

Kirkland, generating rich free cash flows from its Fosterville gold mine in Victoria and Canada flagship operation, has been the big corporate mover into Pilbara conglomerate gold, via TSX-listed Novo Resources Corp and its direct and joint venture (with ASX-listed Artemis Resources) interests.

Sprott has been the biggest-name investor.

"I started with discovery investing, as we call it, in 2003," Middelkoop said.

"I was an early private investor in Auralian Resources, a small company doing exploration work in Ecuador. And this was really beginner's luck [because] I bought 10,000 shares for C30c and at the time I had a newsletter and I tipped our subscribers to buy this small company.

"Within six weeks [Auralian] drilled this discovery hole of 250m at 8g/t [followed by higher-grade intercepts at similar widths) … and the stock jumped from 30c to $43 in nine months."

Kinross Gold Corp was later the ‘lucky' C$1.2 billion buyer of Aurelian, but subsequently an unlucky victim of Ecuador politics that forced it out of Fruta del Norte and the country.

"Once you've experienced this you'll always be hunting for the next big thing," Middelkoop said.

"And the next big thing brought me 10 years later to Australia because we have an amazing discovery in the Pilbara which is ignored by almost all Australian investors.

"I'm quite happy because we can buy the shares [in Australian-listed juniors exposed to Pilbara conglomerate gold] almost for free.

"We see many North American retail investors who are very interested in the discovery in the Pilbara, but … they can only buy the North American stocks and only have Novo and Pacton [Gold].You have Australian companies with great assets in the Pilbara - Artemis, De Grey, Marindi, Kairos - that don't see any bids, and that's because the Australian retail market, but especially institutional investors, are ignoring this discovery.

"What surprises me is the scepticism, especially in Australia - you don't believe in it.

"We have all the proof now that this is a world class discovery, and the only question is - and I've been saying this for the last six, seven, eight months - is it a big discovery, or is it a huge discovery?"

Middelkoop said this week's announcement by Marindi Metals on "multiple … gold-bearing conglomerate horizons" and "widespread fine visible gold panned" at Bellary Dome in the Pilbara highlighted the breadth of the emerging opportunity in the region.

Middelkoop said during his conference question-and-answer with Baillieu Holst's Richard Morrow he wasn't a geologist, but Keith Barron, who'd been on the ground with him in the Pilbara, had observed the progress of different companies working in the region.

"He was a sceptic just like you people in Australia. But he travelled there to the Pilbara and he walked the conglomerates. His statements posted on his own blog [say] … the Novo discovery will be the lowest cost gold mine in the industry by a massive margin. Cash costs may be sub-$100.

"He says it may never be possible to produce a JORC-compliant reserve number, but it doesn't matter because there is so much gold to be found there … you can prove it easily.

"But when you're a cash rich producer like Evolution [Mining in Australia], what's the risk of taking a 10% stake in a A$50 million company? Your risk is $5 million. And then you can have your own director on the board - you will be in the front seat.

"So I don't know why [Australian peers of Kirkland Gold] wait until the North American companies have taken over all of these companies. I'm hearing rumours that Newmont is looking into this situation fairly seriously. Sumitomo, the Japanese, are looking very seriously into this situation."

Asked later by Mining Journal why South African companies that had been big investors in the Australian gold sector, including formative exploration plays, and which obviously had Wits affinities, were not as yet joining the Pilbara gold rush, Middelkoop said it was a good question.

"I have the same questions. I am so surprised," he said.

"You need so much mental flexibility to understand this … This is such out-of-the-box stuff. I've been reading two very old books on the Witwatersrand  story, and you really need to study the discovery 140 years ago to understand this, because you can't compare this to a normal gold discovery.

"Very few people are equipped to do the out-of-the-box thinking.

"But this not such a new concept because it has been proven 140 years ago in South Africa.

"If you study the history, people then had the same scepticism. People had the same questions [including], show us that the gold can be found down dip. Okay, nice, you have some outcrop here, but why should it continue down-dip?

"When you find gold along strike for dozens of kilometres, why should it stop a few hundred metres down dip? It's not logical."

Middelkoop agreed it was early in the exploration investment cycle - for small and larger investors.

M&A was still not driving a lot of positioning investment.

Commodity Discovery Fund investments had included 45 companies that had been taken over.

"When you invest in smaller exploration companies … world class discoveries will always be bought out. I think that is always a very safe way to play this very risky exploration market," Middelkoop said.

Novo's pending bulk sample results, followed by similar work by other companies in far-flung corners of the ‘Pilbara basin', could be the catalyst for consolidation in the Pilbara.

"Even 10g/t [as an average grade] is massive in our industry; at surface or near surface, it's massive. And if you have three bulk samples 500m apart, you know you have a mine," Middelkoop said.

"Over 10 bulk samples are currently with SGS [laboratory] in Perth. If only half of them show double-digit-grade gold, we're in business."

What caught readers' attention on Mining Journal this year

Pilbara gold rush back on