Shooting star Silvercrest Metals is “shooting for a production decision by the end of next year” at Las Chispas in Sonora, Mexico, the company’s CEO Eric Fier told the Beaver Creek Precious Metals Summit. The decision will be based on a feasibility study – including underground development on the bonanza Area 51 vein at Babicanora – that will incorporate at least one more resource upgrade. 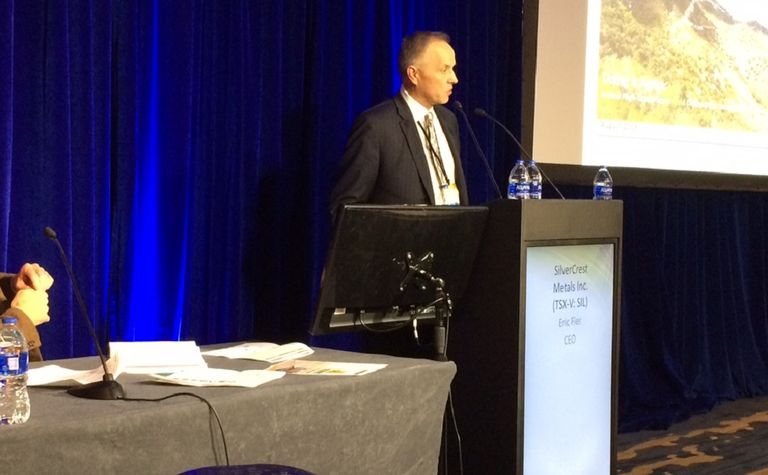 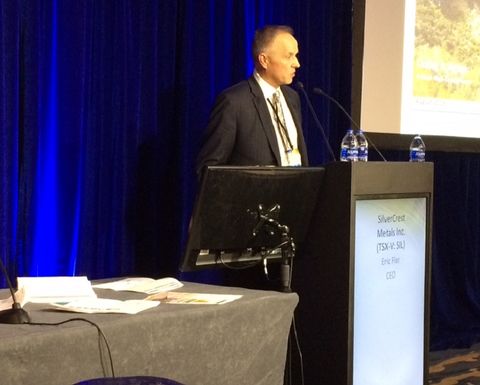 Eric Fier at Beaver Creek: Happy to be here

"I'm not allowed to say bonanza because of compliance," he said.

"But it's very high grade."

And looking a lot like - or even better than - the Santa Elena deposit found and developed by Fier and his team at Silvercrest Mines, and ultimately sold to First Majestic Silver in a transaction that certainly netted investors in the ‘old' Silvercrest bonanza returns.

The new Silvercrest this week updated the resource for Las Chispas, 160km north-east of Hermosillo, to 4.3 million tonnes grading 623gpt silver-equivalent for 86.7Moz Ag-eq, compared with 62.8Moz Ag-eq announced in February this year.

The latest inferred resource includes Babicanora's 1.9Mt at 826gpt Ag-eq, and in the Babicanora number Area 51's stunning 1.6Mt at plus-1kg per tonne of Ag-eq.

"We've been in this valley for 15 years and this whole story is about doing it again," said Fier.

"We found Santa Elena in 2003. We took it from discovery to permitting, financing, construction and production … on time and on budget, in two phases, and then we sold that to First Majestic in October 2015.

"Why sell such a great asset? We fully believed in First Majestic's metal data. It was an all-share $154 million deal that we did and we got them at $4. Within 9 months they were at $24, so it became a $1 billion deal that we did, and my shareholders were extremely happy. Some of them came into Silvercrest Metals.

"We started the company a week after we closed the First Majestic deal and we carved out the land package [that formed] the Las Chispas project, which is now considered a major discovery in northern Mexico.

"We are getting credited for, as of this this latest resource, one of the top five highest-grade silver-gold deposits in the world [with more than 15Moz Ag-eq].

"We're fully committed to running this project right into production."

Silvercrest (TSXV: SIL) shares have surged from C$1.84 at the start of 2018 to as high as $3.55 in July. They were trading around $3.23, valuing the company at C$250 million, when Fier addressed this week's summit. At a fairly sombre event, with much uncertainty around gold and silver prices, it was clear the Silvercrest CEO was enjoying himself.

"I walked out of a room [here yesterday at the show] and was laughing at the time, and a guy turned to me and said, you must be with Silvercrest because you're probably about the only person here who's happy. I just said, yep that's me.

"The stellar part in the new resource is the high-grade component. We went from 32Moz of over 1kg [in February] and we're at 56Moz at over 1kg now. That's in two veins. The [overall current] resource … is now eight veins and there are 30 veins that we've identified on the property. So lots of upside.

"A year and a half ago I was at the Cambridge show in Vancouver and we were just getting going and I told the audience at that show, just expect more high grades.

"And I'm saying it again here - just expect more high grades. I don't know the end of it."

Silvercrest has about C$14 million in the bank and at least $7 million of in-the-money warrants; another $5 million due to be converted next year.

The company would start its PEA in a few weeks and has about 10,000m of infill drilling planned for  Babicanora and a further 10,000m earmarked to test new veins.

The 500m exploration decline into "the heart of Area 51" was permitted and expected to get to its target zone in April-May next year.

"We're just choosing our contractor right now and they'll be mobilising in the next 30-45 days," Fier said.

"That's really going to give us a help-out on the pre-feasibility study side which we want to be running next year. That PFS will be looking at the geotechnical side of area 51, the grade continuity - the veins are pretty nuggety.

"We have done some metallurgical work on the deposit. It looks just like Santa Elena.

"Our plans are to really focus on the Babicanora area, and the Las Chispas area [within the overall Las Chispas project] which is the poor relation right now because it's 300-400gpt. That's what we call low grade.

"This 600gpt-to-1.3kgpt-type intercept in these veins [from Babicanora] we call high grade.

"At Santa Elena right now their mill feed is 170gpt Ag-eq, [and] they're making money, and that's about where our cut-off grade is."