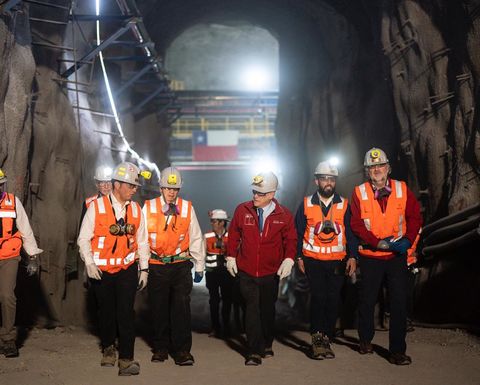 President Pinera (red) opens the Chuquicamata underground mine in Chile

The US$5.5 billion project will extend the life of the 100-year old mine for many decades and see it process 140,000 tonnes a day and produce 320,000 tonnes per year of copper and 16,000tpy of molybdenum following a seven-year transition from openpit operations. It has reserves of more than 1 billion tonnes grading 0.82% copper

"Chuquicamata is not just another project, it is unique. Its complexity and magnitude have no equal in the Chilean market; there has never been a project with this scope," said VP projects Gerhard Von Borries.

Having taken 15 years since the first engineering works were completed, Chuqui underground has seen the development of three levels underneath the openpit to a depth of 989m below the pit floor, with some 142km of tunnels built.

Ramp up progressing ahead of schedule

Freeport to explore for missing chunk of Chuqui