Mark Bristow said in an interview earlier this year he expected Barrick Gold Corp to be “one of the few” global gold leaders to have delivered on its plans in 5-10 years’ time. That would presumably contrast with numerous less auspicious performances in an industry “in decline”. He may well repeat the message at this year’s Denver Gold Forum, but he won’t be the only one. 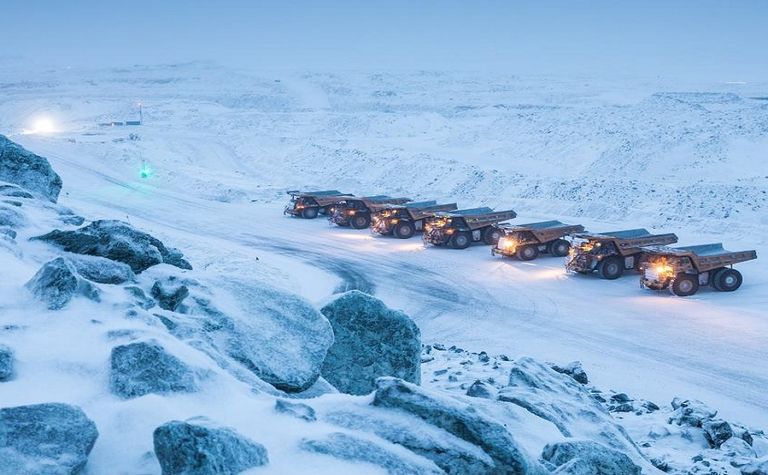 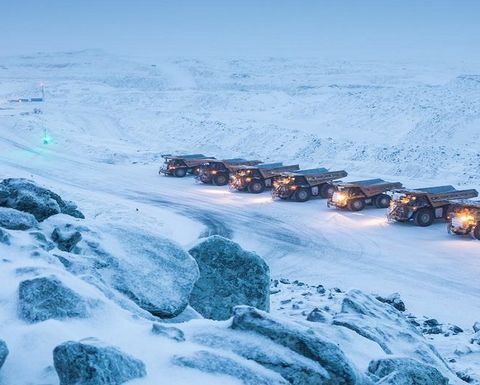 Barrick has company in the ‘wannabe-the-best in gold' stakes. Investors and industry leaders accept that is no longer just about annual production levels and reserves based on best-case-scenario long term gold prices.

Bristow, who headed Randgold Resources for 20 years before its acquisition by Barrick during last year's Denver Gold Forum, championed fortifying mine and broader business plans, certainly around quality deposits but also the use of base-case gold prices, and also thinking and planning everything long term. "What I set out to do was build an always-profitable gold company by setting longer-term goals, and not to get seduced by the quarterly toing and froing," he said while CEO at Randgold. "It is impossible to run a public company and beat yourself every quarter."

He has said sector short-termism has contributed to an uncertain industry future due to perennial under-investment in mines, people and exploration.

Tthe mindset also drove over-investment in high-cost production and high-priced, badly timed M&A that led to an estimated aggregate debt in the gold sector of US$47 billion several years ago. That number was alarming enough. The fact that it grew nearly fiftyfold in a decade was startling. The existential threat posed to a number of companies was real then when gold prices were lower than now.

But the shadow it cast over the sector's reputation as a half-decent custodian of capital and investors' interests was also long. It's arguable whether or not it is receding, though it is clear at the moment rising gold prices and the promise of more strategic consolidation in what remains an overly fragmented sector is promoting stronger investor interest in leading gold companies - and even the industry's promising juniors - in North America, Europe and Australia.

That is partly captured in the table below, which shows solid share-price gains across the board among 18 large gold companies presenting in Denver this year.

The market-value improvements have come with rising dividend payouts and even share buybacks, and the so-called capital discipline has extended to balance sheet repair with the net debt in the table below (not including the companies in a net-cash position) at US$22.8 billion and many companies in the throes of asset sales to further cut debt and position themselves for more profitable growth.

"While we've seen a rally in the gold price, this will not diminish our focus on improving free cash flow and returns through active portfolio management and strict capital discipline," former Barrick Gold chief Kelvin Dushnisky typified broader sector sentiment in recently delivering AngloGold Ashanti's interim results. "Tight cost management will continue to be a key driver for us."

What is also notable about the debt picture, of course, is the rapid rise of companies such as Northern Star Resources, Evolution Mining, Centamin and Kirkland Lake Gold without the accumulation of debt.

Kirkland Lake is the sector rising star that has outshone pretty much all of the rest, turning high grades at Fosterville in Australia and Macassa in Canada into rivers of cash, and surging market value.

This year's Denver Gold Forum will, perhaps more than at any time in the event's 30-year history, shine a spotlight on not just the growth options in the pipelines of gold-sector leaders, but the quality of those options and the delivery track record of the owners, or prospective new owners.

The spotlight will illuminate the growing appeal - in many cases enduring but renewed allure - of standout ‘gold' jurisdictions such as Quebec, British Columbia, Nevada, Alaska, Western Australia, Victoria, and West Africa. It might also reveal new questions about Colombia, Russia, Papua New Guinea and other places generally expected to play a bigger role in restocking the reserve/resource inventories of the sector heavyweights in future.

Northern Star executive chairman Bill Beament said recently in Perth, Western Australia, the 10 best performing companies (not necessarily the 10 biggest) in the gold space  in the past three years had all delivered higher production growth, consistent operational results and successful, and expanded reserve and resource delineation, and it was all generally occurring in "low sovereign risk jurisdictions". Trading premiums - similar to that previously enjoyed almost exclusively by Randgold Resources - were following deliverers of that higher quality growth, with lower sustained AISC and higher dividend yields.

Beament said more than US$19 trillion of global funds under management "now has an ESG filter to the investment process".

Tier 1 jurisdictions such as Australia, the US and Canada had more mature governance, social and environmental frameworks, and generally afforded opportunities to deliver lower capital-intensity projects. 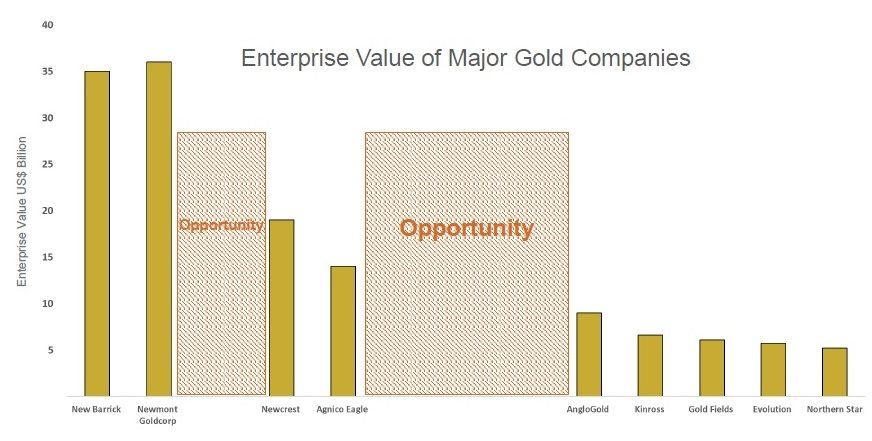 Bristow said at Barrick Gold's latest results presentation very few companies would be able to "deliver value growth" given what had transpired in the sector since the early part of this decade. The industry was therefore "facing a production precipice".

Harmony Gold CEO Peter Steenkamp has been among the sector leaders echoing Bristow's view of a "production cliff", potentially in 5-10 years, resulting from under-investment "in capital and exploration".  Steenkamp said undeveloped orebodies were generally getting deeper, raising investment hurdles, at the same time investors were seeking higher returns. 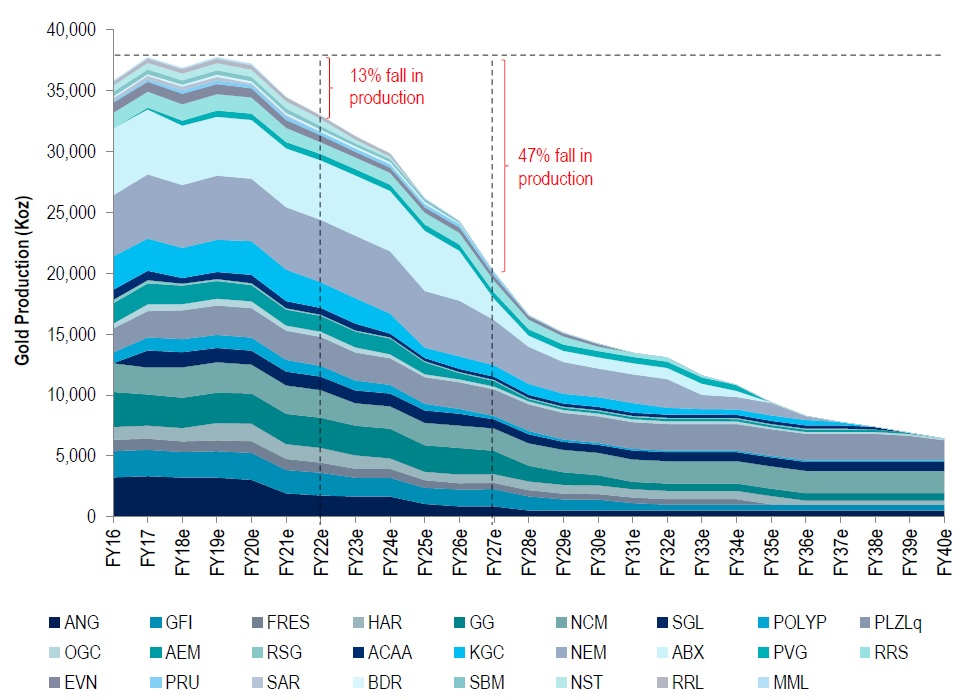 "The cost to sustain production is increasing. The industry is mining more tonnes at lower grade to maintain ounces," Gold Fields CEO Nick Holland said in Perth this week. He will speak in Denver, probably along similar lines, in a fortnight.

"In 2013, the World Gold Council (WGC) defined the true cost metrics under the AISC protocols and also defined non-sustaining costs. Between 2012-2016, AISC cost trends per USD/oz decreased at a rate of just under 7% per year, but increased from 2017 onwards within an environment where there was a notable decrease in sustaining capital from US$313/oz in 2012 to US$166 in 2016 - a level maintained since.

"Gold exploration budgets were also slashed with the bulk of such exploration over the past five years being brownfields projects and near-mine development.

"At the same time, growth in global mine supply slowed significantly, increasing only 1.8% in 2018 compared to 6.2% in 2013. Some 30% of global gold reserves are currently associated with assets where a construction decision is yet to be made.

"We therefore have an emerging situation where the industry can potentially sustain production at current levels for the next few years before entering a period of secular decline in the longer term."