South32 to deal with familiar face at Trilogy Metals

It may be a case of déjà vu for South32 if it decides in January to exercise an option to acquire 50% of Trilogy Metals’ Ambler projects in Alaska for US$150 million. 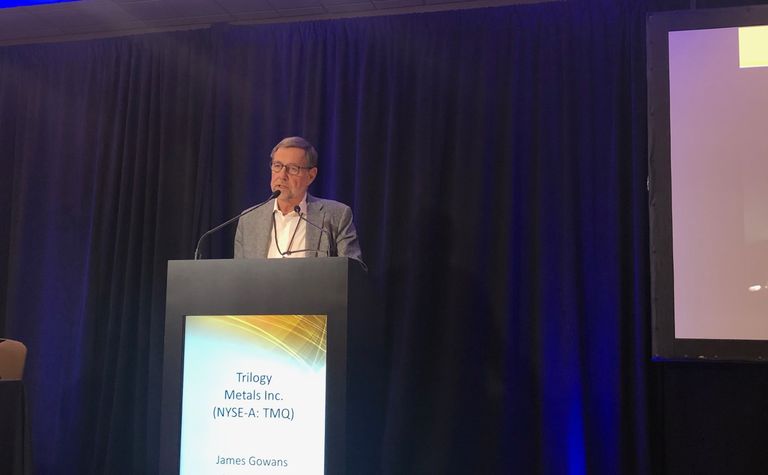 Gowans' last major role was as CEO of Arizona Mining, which South32 acquired for $1.4 billion last year. Before that, he was co-president of Barrick Gold.

Despite only two days in the top job, Gowans told the Precious Metals Summit in Beaver Creek that he'd followed Trilogy for a long time and was very familiar with Alaska.

"Getting involved with Trilogy is kind of like going home for me," he said.

Trilogy's Ambler District projects have a combined resource of 8 billion pounds of copper, 3Blb of zinc and 1 million ounces of gold equivalent.

January 20, 2020 is a key date for Trilogy as that is the deadline for South32's decision on whether to exercise an option over the projects, which comprise the Arctic and Bornite deposits.

"We haven't committed one way or the other, but we like the prospectivity," South32 CEO Graham Kerr said last month.

At the time, Kerr said the company was keeping a close eye on Trilogy's permitting process for a road from the mine to Fairbanks, where concentrate will then be railed to Anchorage.

"Road permitting is the key one right now," Gowans said.

A public comment period closes next month and Trilogy hopes to get a final record of decision in December.

A feasibility study is then due to be completed on Arctic during the first quarter of 2020.

A prefeasibility study put initial capital costs at $779.6 million, with an after-tax payback within two years - or three at a $2/lb copper price.

Gowans said he expected capital costs to remain in line with PFS numbers.

"Operating costs are all pretty reasonable so it's got a pretty good payback of two years," he said.

The project still has huge exploration potential, which has been a key attraction for South32.

On Monday, the company announced drilling at Bornite's Sunshine prospect had intersected a new zone of mineralisation with results including 9.1m at 3.95% copper equivalent and 7.88m at 5.23% copper equivalent.

"We hit a zone we didn't know was there," Gowans said.

That work was part of a $9.2 million exploration program funded by South32.

The two companies have funded an additional $2 million for district exploration.

"This is pretty much an explorationist's dream come true because there's lots of targets," Gowans said.

Gowans described the next six months as an exciting time for Trilogy, with permitting, the feasibility study and South32's decision on the horizon.

If South32 makes a positive decision, the funding will be used to complete the permitting and early engineering works.

"That'll move it on, so getting closer to reality," Gowans said.

Trilogy is capitalised at C$300 million.