The gold price could break the US$2,000/oz level in the coming 14 months in the lead up to the November 2020 US federal elections, Gluskin Sheff & Associates chief economist David Rosenberg said during a keynote presentation at the Precious Metals Summit in Beaver Creek, Colorado. 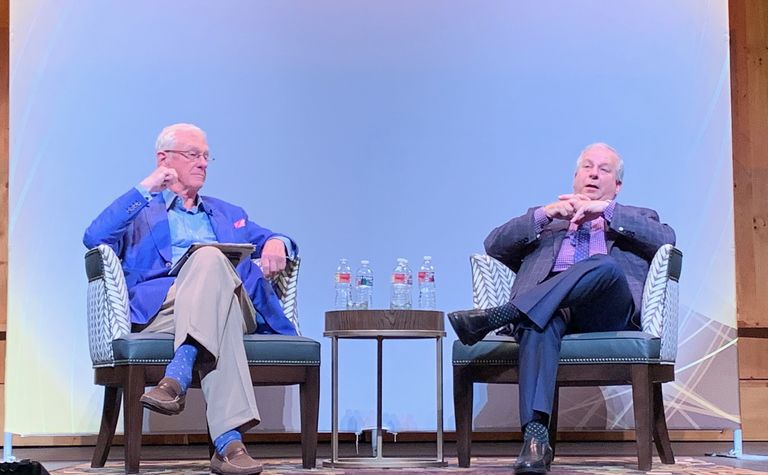 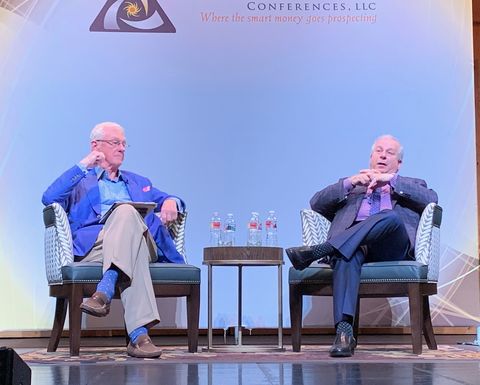 John Hathaway (left) and David Rosenberg discuss the likelihood of a US recession at Beaver Creek, Colorado

"I can even see a situation where gold could break $3,000 or higher. That might be a conservative forecast, given the simmering US domestic political risk (based on falling approval ratings for Trump), a brewing recession and as global geopolitical tensions grow," he said during a ‘fireside chat' (sans fire) with Tocqueville Asset Management CFA John Hathaway.

Critically, Rosenberg sees the onset of economic recession already evident in the UK, Italy and Germany; three of Europe's four biggest economies on the brink of recession. In the US, the recession had not yet started, but the economy had weakened substantially, he said.

For the third quarter the Federal Reserve growth model has fallen to 1.5% for GDP growth, down from 2.2% estimated only a month ago.

"Some would say that's top speed on your way to a recession. It's extremely low growth and I would say we are already in a low-growth recession. The consumer is the glue keeping it together at this stage," Rosenberg said in response to a question on whether a US recession was inevitable in the near term.

"I can't believe no one is talking about the US housing market as a leading indicator of the welfare of the economy. When I tell people that residential construction in the GDP data has declined for five straight quarters, nobody believes me.

"Capital spending actually started a recessionary trend in the second quarter; not only in the US but on a global scale."

He said the medium GDP sector was flat right now, noting it was difficult calling a recession without 70% of the economy - the consumer component - following suit. "The leading indicators will show a recession is more evident by the fourth quarter."

Rosenberg cautioned the strong performance of stockmarkets was not indicative of underlying economic health. "When talks with China revived the markets roared back to life, but I think the market is whistling past the graveyard.

"I'm not expecting a kumbaya moment that will end the trade war with China. This won't happen. We're midst in a classic short squeeze.

"This is an economic war not a trade war. China is challenging the US for economic superiority. It's not only about trade, but also about tech, cyber and satellite. It could spark potential military conflict in the South Chinese Sea," he said, punting recessionary safe stocks such as military and telecoms stocks.

"The reality is this chapter of the trade war has seen Tump raising tariffs four times and Chinese president Xi Jinping retaliating four times. China is not running out of options. They're allowing their renminbi to soften the blow.

"So, what if the US and China sign a deal? Will Congress ratify it? Trump already signed the United States-Mexico-Canada Agreement and it's still stuck in congress."

Should a recession unfold, the US policy response could at first be muted. "There is quite a lot of dissent in the Fed to lower rates," Rosenberg said.

"It would probably not be 50 basis points, more likely to be 25 points. The hawks are winning out for now, but the bond markets are telling the Fed they're behind the curve."

Rosenberg thinks a recession is "very likely" and he expects the central bank to fight it tooth and nail. "The funds rate will go to zero: the question is whether it will go to negative."

He suspects the Fed has been working behind the scenes to better understand what effect negative rates will mean for the US economy. "They might have to enlarge the balance sheet and perhaps go back to another round of quantitative easing, but under different circumstances this time round.

"This time the big bubbles are on corporate balance sheets instead of being in the housing market."

Rosenberg said over time the peaks of the funds rate were getting lower and the lows were also falling. "It's not because the cycle gets worse and worse. This time the recession is going to be known for its duration because the Fed will fight it more aggressively.

"In the final analysis, were going to have debt monetisation and this is why I'm doubling down on gold. There is no more bullish comment I could make for gold."

Rosenberg said the global monetary base could explode and that's how gold would show the way. "We know how much gold is produced each year, unlike fiat currencies," he said.

"We are in a period of heightened instability and volatility. The unprecedented US debt level carries its own particular risk."

Will it lead to a credit downgrade? "The markets might do it for the US. The corporate debt-to-GDP ratio has never been higher. We have a tsunami of debt refinancing coming that will directly compete with government for capital."

"We're already in a secular bull market for gold, since capital spending has collapsed relative to savings. I don't know when it will happen, but I'm de-risked overall," he said.

Maritime on track for Hammerdown feasibility