With its acquisition of Leagold Mining earlier this year bedding down well, Equinox Gold is preparing for its next phase of growth through internal organic expansion projects and exploration at several operations, president and CEO Christian Milau has told Mining Journal at the 2020 Precious Metals Summit. 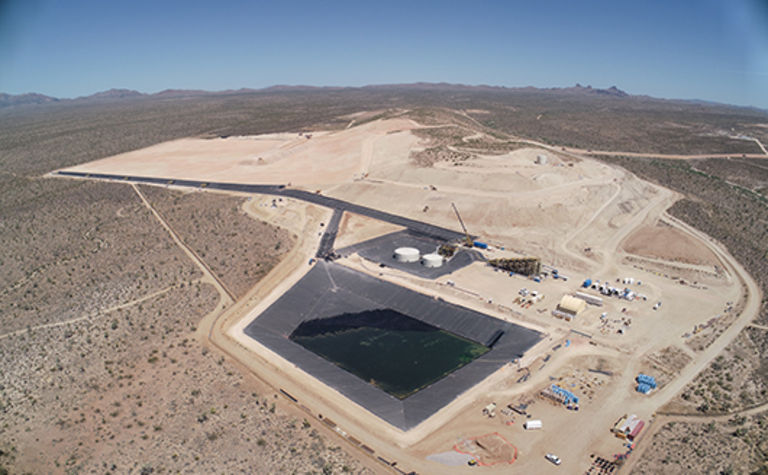 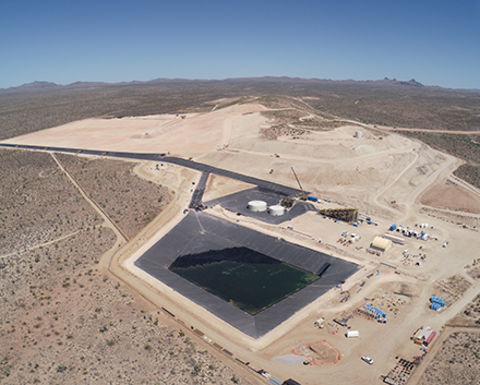 The heap leach pads at Castle Mountain in California, USA

Its next producing asset will be the 45,000 ounces a year Castle Mountain project in California, USA, where construction is just about finished and leach pad irrigation is starting. The mine will have an initial 16-year life and the company expects to complete a feasibility study on the phase two expansion around year end. "It will take two or three years to amend the permit and we aim to apply for it around year end," Milau said.

Next up will be a restart of operations at Santa Luz in Brazil where the company is contemplating 100,000oz/y of production over an 11-year mine life. "It will take under $100 million to get back into production and we will change to residence leach from carbon leach. We will launch into full construction in next couple of months," Milau said.

At Los Filos in Guerrero, Mexico, the company is looking to expand output from 180,000oz/y to 350,000oz/y with a new openpit and underground mine and an 8,000 tonnes per day upsized carbon-in-leach plant.

A community dispute over benefits currently sees a blockade at Los Filos, but Milau does not expect it to impact the expansion. "We started opening up a new openpit and underground mine so we are investing more money than we are earning there at the moment but the CIL expansion was something for the end of the year so is not affected," he said.

Equinox has multi-year agreements with three communities covering land access, social collaboration including health, scholarships and upgrading the water system, but Milau believes communities have been stirred-up by a non-governmental organisation and local media. "Local media is sensationalising and says the communities are asking for things they not directly asking the company for. We want to sit down with the communities and work through things but there has to be respectful dialogue. Newmont inherited an issue at its Penasquito mine from Goldcorp and it took the approach of not negotiating under blockade, so it took several months," he said.

At Aurizona in Brazil, Equinox is looking at the upside potential from 120-130,000oz/y 2020 production as well as the possibility of building another mine on the property.

At Mesquite in California, USA, exploration has outperformed the company's expectations, adding multiple years to the mine life. "When we bought Mesquite it had a three-year mine life. We have been operating it for 2.5 years and it still has three years of reserves. It is looking like a fantastic buy," Milau said.

Exploration is also rising up the agenda due to the additional cash the company is generating from high precious metals prices, with the company working on a three-year exploration plan aimed at increasing the mine life of some of its operations.

"Investors in North America expect to see 8-12 years of mine life," Milau said.

"We have 12Moz of reserves so we have a 10-year mine life on average but it is skewed so we will continue to bring up the ones that are a bit under. It will take two-to-three years and we are budgeting this now as we have got to a position that the balance sheet is very strong, the gold price environment is good and our capital programmes are funded through cash flow.

"We have some mines with 10-15 years of life, some with 5-10 years and some with shorter. We are looking to extend most of the mine lives towards 10 years, particularly Mesquite, Fazenda and Aurzona, but there will also be exploration at Castle Mountain and Los Filos.

The company now has $500 million in liquidity with $300 million in cash and $200 million under its revolving credit facility following a recent repayment of $200 million of that. Things are progressing to the extent that some shareholders are asking for dividends.

"Eighteen months ago we were budgeting for $1,400/oz gold but it is now a very different world and investors expect a dividend," Milau said.

"The message is that paying a dividend shows discipline and confidence in our plans. If gold stays at these levels and costs remain constant then maybe in late 2021 we may be able to start a dividend programme.

"I thought it would be a year or two further in the future."