The Kışladağ gold mine is Eldorado Gold’s flagship operation. The heap leach mine in Turkey’s southwest was the mid-cap producer’s first major operation and has contributed hundreds of millions of dollars in cash flow since coming into production in 2006. 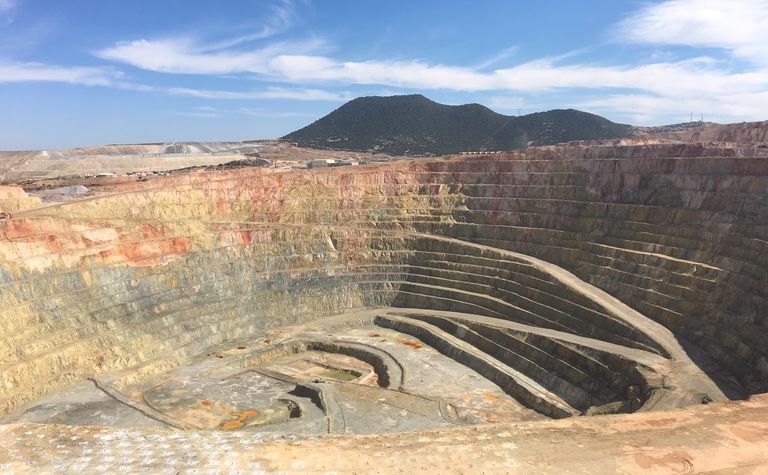 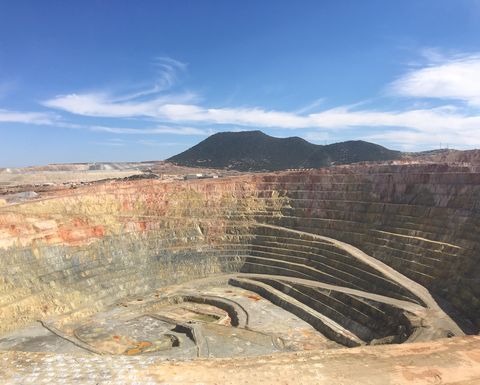 The Kisladag pit, with the eponymous mountain behind it. The mineralisation shifting from pyrite to feldspar caused the drop-off recoveries, George Burns said.

With four years left of its mine life, recoveries dived from 60% to 35-40% and the company was suddenly leaving a lot more gold on the leach pads.

In response, Eldorado swiftly pulled the plug on mining the Kışladağ openpit, which produced 211,000 ounces of gold in 2016.

Metallurgical work showed a mill was the only way to keep getting economic amounts of gold out of the low-grade, high-tonnage operation. Mining Journal visited the gold mine in the lead up to the board's final decision on putting US$520 million into the mill project, which would see it producing 270,000ozpa over nine years.

Since mining stopped in April, 2018, the team at Kışladağ has managed to eke out far more gold than expected from existing stockpiles.

The company says it could get 20,000-40,000oz out of the mine in 2020, but the costs might get too high by then. The September all-in sustaining cost at the mine was $1,010/oz (although this included a write-down due to changes in stockpiles this year).

Overall, it's an expensive, surprising situation where a miner has been shown to not have the geology right. But now it's all about the response, and Eldorado is on the front foot.

On site, it was hard to imagine the stay-alive option would not be green-lit. Despite 250 redundancies across the teams (from mining to the PR operation), everyone is hard at work and the operation is a focus for the region.

In Turkish, Kisladağ means Kisla mountain, which is next to the mine.

From the surrounding plains in southwest Turkey, you can see the waste ore piles from tens of kilometres away, because it is perched next to its namesake in a set of hills.

Eldorado - through its Turkish subsidiary Tuprag - has built a winding road up to the mine that Jeremy Clarkson would have plenty to say about.

Coming in past the vegetable garden and PR office that also serves as the public face of the mine, the heaps become visible, then to the left you see the pit.

While mining has now stopped, Eldorado is reshaping the pit for the next phase of production so blasting continues.

Before the cuts, the mine employed around 1,200 people (contractor and salaried) and once the mill is done that will climb up to 1,500 people.

Shareholders will be hoping a company looking to spend $520 million to get an operation going again so soon after being surprised by the geology will want to know the company knows exactly what went wrong.

When first telling investors something was wrong, the company said the fall in production would only see ounces deferred, not left in the leach pad, and kept 2018 guidance at 320,000-335,000oz.

While this was early in the situation, the explanation that some lab work would fix the problem and see business go back to normal comes across as overly optimistic.

In a phone interview, Eldorado CEO George Burns said it was clear to the team why recoveries had dropped off.

"We were historically seeing slightly better than 60% recoveries, and the metallurgical testwork late last year suggested the recoveries were going to be closer to 40%, it's fairly simple why that change occurred," he said.

"Historically the dominant portion of the gold in the deposit was associated with pyrite. Pyrite is a hard rock that when it goes through our crushers, creates a lot of surface area, i.e. 60% that is in that rock is exposed on the surface and when we put a cyanide solution to it dissolves the gold and we can then recover it.

"On a go-forward basis, a dominant amount of the gold is associated with feldspar. Feldspar rocks are a lot softer, and when they go through a three-stage crushing, we don't get the same amount of surface area exposed, in fact only 40% of the gold is now exposed for cyanide."

The mine's original feasibility study had recoveries staying at around 60% for the whole mine life, which was 15 years.

This clearly didn't happen, although production has been very strong for an operation that doesn't actually mine any more, thanks to the sonic drill-backed work.

The processing team at Kisladag has managed to get recoveries back up to 60% by targeting gold-heavy areas. PICTURE: Eldorado Gold

‘You could eat your lunch off here'

It's easy to see why the redundancies were tough on the mine.

Many of the workers Mining Journal met on site had been there a decade or more. While Kışladağ is the major employer in the region, this is still a strong record for the company.

The mine's PR director Hakan Ünal said the company worked hard on operating like a Canadian mine. Those efforts were shown in the mobile maintenance area (and thankfully not in the canteen).

The team, led by Rıdvan Veziroğlu, has won plaudits from Hitachi and Caterpillar for its work. Giving a tour of his facility, he springs a surprise inspection on workers in the store rooms.

Veziroğlu is not wrong, everything is spotless.

One of the bigger changes to come in recent years in the workshop is the constant use of computers. Mechanics and other maintenance workers log repairs and look up guides on laptops before taking to the task.

Veziroğlu said this had taken computer training for many in the section, giving them skills to take away from the mine.

The mine also has jobs for the locals not keen on getting in the pit. Its vegetable garden and tree-growing operation for the eventual rehabilitation employs several people from the area and produces some properly tasty chickpeas. 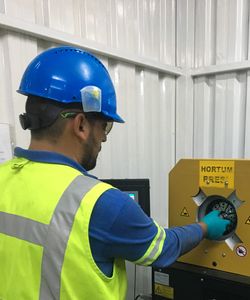 One of Veziroğlu's crack maintenance workers making a custom hose

It's workers such as those under Veziroğlu and in the garden that recent Turkish financial issues hit. Inflation in the country hit 25% year-on-year at the start of October, and over 6% in September alone, according to official figures, and the Turkish Lira is down 30% against the US dollar since October 2017.

This is good for international firms, keeping costs like diesel level, but suddenly puts pressure even on those with higher-than-average mine salaries.

In response, Eldorado upped pay months before the next review was due.

Burns said they often reviewed wages quarterly, but recent price jumps had meant they had brought it forward this time.

Looking at the impact of this scenario more broadly, a country with a weak currency and inflation issues signals sovereign risk danger, especially with a major capital investment coming up.

Power is also increasingly centralised in the office of president Recep Tayyip Erdogan, so an adverse decision from could spell the end of a project.

Happily, this is all academic for Eldorado. The new mill is already permitted at Kışladağ, with government agreeing it conformed to the existing Environmental Impact Assessment.

Burns said he was not worried about Turkey asking for more cash from the company.

"When you think about the financial crisis that they're going through with inflation and FX movement, I think it also [leads to] additional support, to make sure our industry and others remain healthy," he said.

"The last thing Turkey needs is for investment to dry up.

"I think the macroeconomics in the country and then the on-the-ground reality that we've experienced are as good as they've ever been, although the international headline risk that people read about in the newspapers may not seem that way."

In the Mining Journal World Risk Report 2018 (feat.MineHutte ratings), Turkey was given an investment risk rating of 62, putting it alongside Botswana and Burkina Faso (and Greece, although Eldorado would certainly disagree).

One new rule that has helped Eldorado is a requirement Turkish contractors bid for jobs in Turkish Lira, cutting costs for the miner after previously considering US dollar pitches.

The Kışladağ feasibility study outlines a two-year construction period, with first ore through the mill in late 2020 and commercial production in 2021.

Shareholders should quickly find out Kışladağ 2.0's chops once commercial production is reached: the grade at the bottom of the pit is around 1g/t, so Eldorado will be hitting big production numbers quickly if all goes well.

The mill is obviously the biggest expense, at $384 million.

Burns said it was more of a "reboot" than a new project for Eldorado.

"When I look at this investment, sure we have to spend this half a billion, and when you look at it , about 20% of that half a billion is pre-stripping cost, and you witnessed this, we're continuing to remove waste to set up this nine-year mine life with the mill scenario," he said.

"I view this as a largely derisked opportunity. We understand the orebody. We've got much of what's required for a successful business already in place, and it's really about the capital cost estimate and schedule and then proving the met work, the 80% recovery, is solid."

Eldorado has some financial juggling to do to get everything off the ground, as BMO's Andrew Kaip pointed out after the FS was released.

"Eldorado exited [the September quarter] with $378 million in cash and equivalents and $600 million in debt," he said.

"We expect funding questions to arise given the company's current cash position, $520 million capex and $600 million in debt due at the end of 2020."

Eldorado CFO Philip Yee said the company would start looking at paying for the mill now the FS was done and cost finalised, and was already in talks with third parties.

It's not clear how Eldorado missed the geology that would kill the heap leach operation several years before its forecast end-date.

Shareholders are still suffering from the news, with the company's share price down 70% since October last year.

Turkey is not the only trouble spot for the company (Burns told Mining Journal he had not received an official response for his demand for $877 million in compensation from Greece) but Kışladağ is its largest producer and a linchpin.

"When I look at Kışladağ, it's been the flagship of Eldorado," Burns said.

"It brought Eldorado into the mid-cap gold space, and it's been a very consistent performer in terms of production and financial returns."

But the upside is clear.

If Eldorado gets the financing, mill and dry stack tailings combination right it will be a major cash generator.