Canada’s Monarch Gold has signed a memorandum of understanding with Ontario Northland Railway to study the merits of transporting ore by rail from the Wasamac project to Glencore’s Kidd concentrator in Timmins. 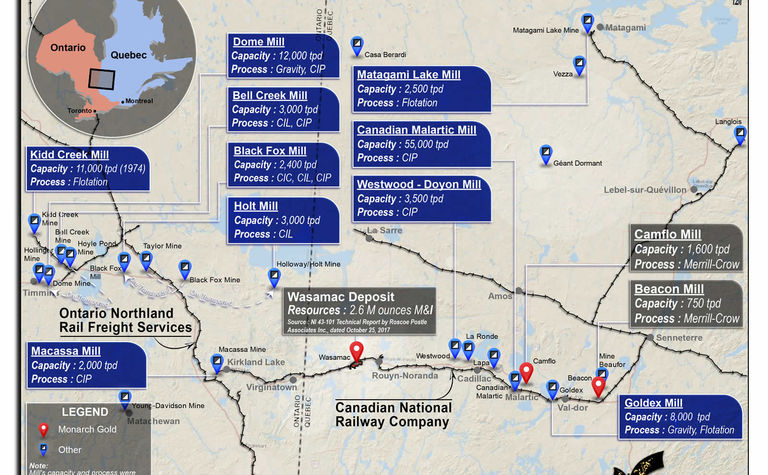 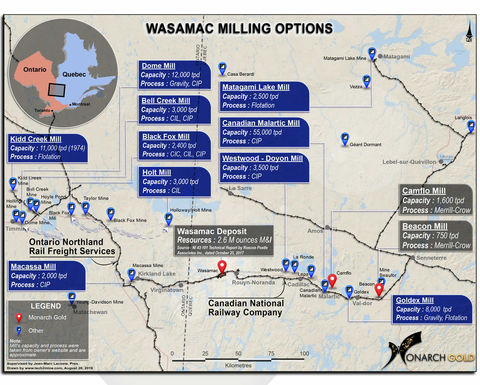 The first phase of the agreement comprises an economic study on the viability of the project development option, which could potentially halve the anticipated project capex a December 2018 feasibility study pegged at C$464 million, provisioning $230 million to build a mill and tailings facility at site.

CEO Jean-Marc Lacoste said the development was another important step under the custom milling option, "the objective of which will be to negotiate a favourable rate" to transport the ore. "Ontario Northland has the necessary capacity, a solid reputation and has been providing this transportation service to mining companies for more than a century," said Lacoste.

The Ontario Northland Railway serves northern Ontario and northern Quebec, running directly past Wasamac to an exchange terminal with Canadian National railway at Rouyn-Noranda, after which the line becomes CN property to the east and serves other major Abitibi region mills including Yamana Gold-Agnico Eagle's Canadian Malartic, IAMGOLD's Westwood and Eldorado Gold's Lamaque, as well as Monarch's Camflo and Beacon mills.

Monarch raised C$5.4 million early last month in a private placement that attracted a $4.2 million investment from Yamana, and $720,000 from Alamos Gold.

Monarch has been flagged as a potential M&A target by industry insiders, with attractive Wasamac attributes said to be capex below $500 million, a mine life of more than 10 years, and annual production above 100,000oz gold-equivalent.

Monarch shares (TSX:MQR) have nearly quadrupled since the broad mid-March equity sell-off to hit a new 12-month high at 45c this week. They closed lower at 42c on Thursday, capitalising the company at C$113 million (US$83 million).

Cashed up and advancing Wasamac options 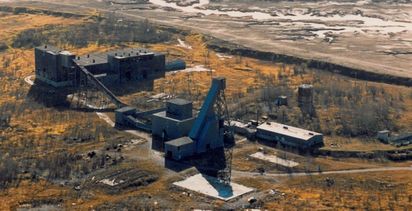