Canada’s government has announced it will invest C$5 million (US$3.8 million) to help gold producer Goldcorp’s (TSX: G) Borden mine in Ontario become a “mine of the future”. 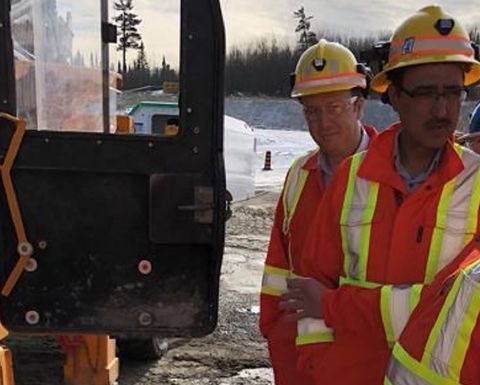 The funds are from the government's $155 million (US$118 million) Clean Growth Programme.

"Improved environmental performance in Canada's mining sector is one of the key paths to a low-carbon economy," Sohi said.

Goldcorp president and CEO David Garofalo said it was gratifying to see multiple levels of government support innovation and the company's vision of "a safer, greener mining industry".

"We are partnering with like-minded technology suppliers like Maclean Engineering and Sandvik, provincial and federal governments and First Nations to commercialise clean technologies, improve health and safety performance, and reduce GHG emissions with the aim of improving the viability, sustainability and profitability of our mines," he said.

The company had announced its all-electric vision for Borden two years ago.

The mine is expected to start commercial production in the second half of 2019 and is a key part of Goldcorp's plan to increase production 20% by 2021.

Separately, the company also announced it had received regulatory approval for a buyback programme of 5% of its shares over the next 12 months.

Goldcorp shares are trading at the lower end of their 52-week range, closing up just over 2% yesterday to C$11.82 to capitalise it around $10.3 billion.