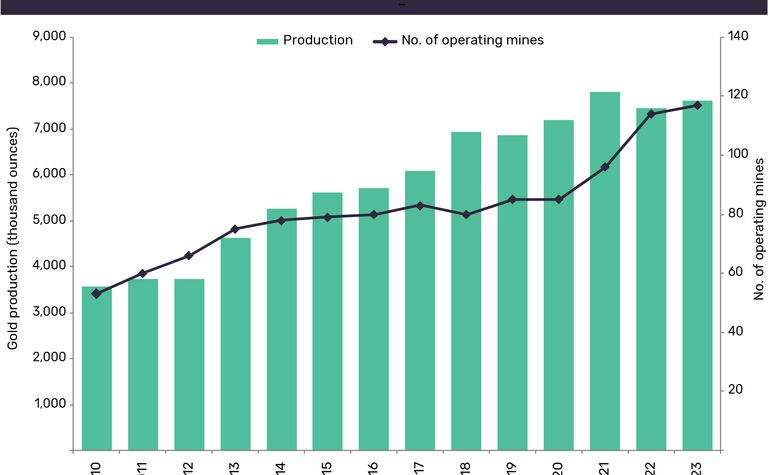 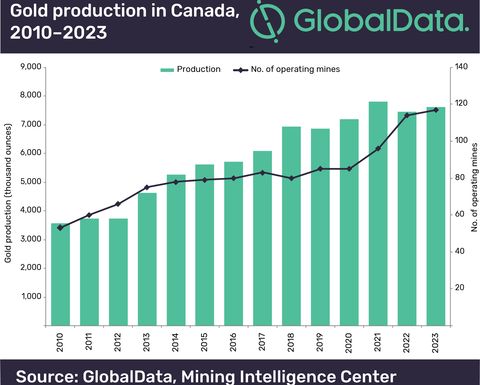 Much of the growth is driven by development projects nearing start-up, including Meliadine in Nunavut, Eagle Gold in the Yukon Territory, and Lamaque Gold in Quebec in 2019, which will support growth in 2020. These will be followed by a British Columbia-centric second wave of starts including Kerr-Sulphurets-Mitchell in 2020, Blackwater in 2021, and possibly New Prosperity in 2022.

"These six mines, having a combined annual gold production capacity of over 2.2Moz, will help deliver high growth to the market in 2021 and then support a recovery in 2023," GlobalData's Vinneth Bajaj said.

"In addition, this will also offset the impact of several closures including the Minto and Taylor mines in 2021 and 777, Croinor, and Touquoy in 2022, as the sector struggles with mine financing, rising production costs and declining ore grades."

GlobalData's statistics showed Canada was the fourth-largest gold producer in 2018, behind China, Australia and Russia. Its 6.9Moz was 14.2% higher than in 2017 and represented 6% of the global total.

Production from Pretium Resources' Brucejack and New Gold's Rainy River projects were key contributors towards the significant rise in production.

According to Natural Resources Canada, gold is a primary target for the country's mineral explorers.

"Goldcorp was already Canada's largest gold producer before the US$10 billion Newmont takeover was concluded in April 2019. The newly formed Newmont-Goldcorp is now not just the largest gold mining company for Canada, but also the largest globally," Bajaj said.