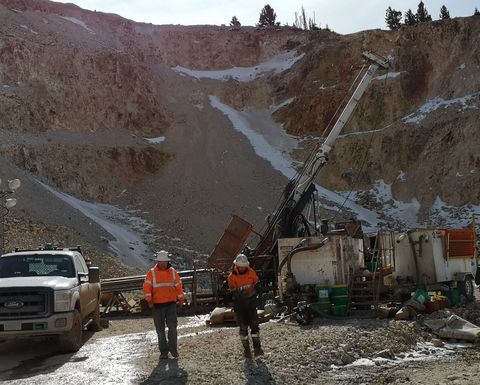 Drilling at DeLamar in Idaho, USA

Coeur will invest $6.6 million at a price of C$1.15 per share in a non-brokered placement, while Raymond James will act as lead underwriter and sole bookrunner for a concurrent $15 million bought deal at $1.15 per share.

As part of the strategic deal, Coeur will have the right to maintain its pro rata share ownership interest in Integra for a two-year period and to appoint two members to a newly created five person technical committee to review ongoing exploration and pre-development activities on the DeLamar project in Idaho, as long as Coeur holds at least 3% of Integra's share capital.

Proceeds from the offerings will be used to fund exploration and pre-feasibility level study expenditures at DeLamar, which Mining Journal recently visited.

Integra recently repaid the November 2017 $4.5 million secured promissory note to Kinross Gold which represents the final payment related to the acquisition of DeLamar. As a result, Kinross has released its security on 25% of the shares of DeLamar Mining Company.

As work at DeLamar advances towards prefeasibility, Integra recently promoted Timothy Arnold to COO from his former position of VP project development. Arnold has more than 35 years' of experience in hard rock mining; openpit and underground, engineering and production, consulting and operations.

Shares in Integra Resources are trading at C$1.15, valuing the company at $115 million.

Integra Resources Separates From the Crowd