Radisson Mining has agreed to acquire the New Alger property next to its O’Brien project, in Quebec, Canada, from Renforth Resources in a cash-and-scrip deal worth up to C$9.5 million. 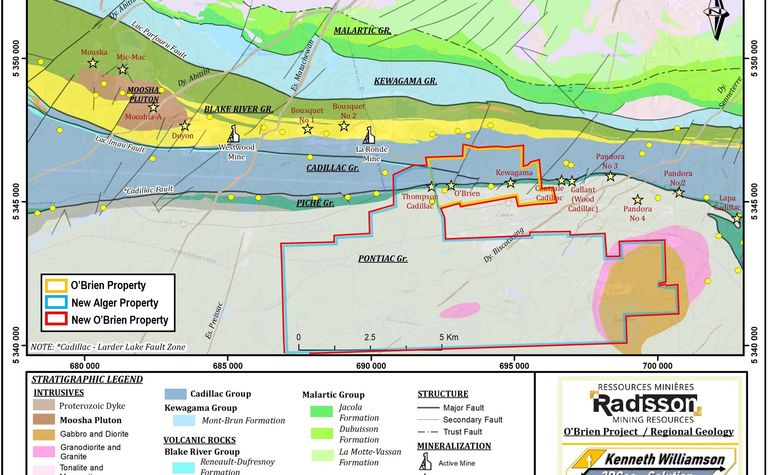 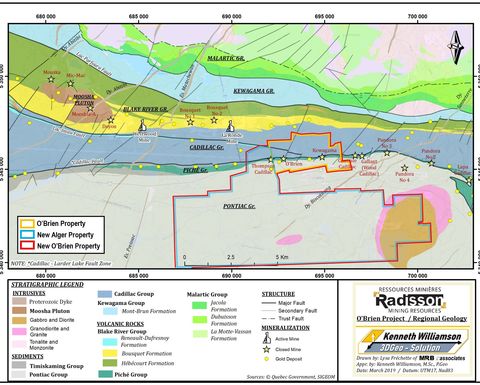 New Alger produces a roughly nine-fold increase in the size of O'Brien to 5,839 hectares.

Radisson now has about 6km of prospective strike length along the Larder Lake-Cadillac Break near Rouyn-Noranda and Val-d'Or, with claims now extending 3.2km to the east and 2.7km to the west of the past-producing O'Brien gold mine.

Like O'Brien, New Alger has seen limited exploration at depth.

Radisson is issuing 12 million shares to Renforth and making a $500,000 cash payment, while an additional $1.5 million payment is contingent on New Alger starting commercial production, a sale of the property for more than $40 million, or a change of control in Radisson.

Renforth will undertake a financing of 24 million charity flow-through shares to the value of $3.24 million at 13.5c per share, with Radisson being the ‘back end' buyer. As a result, following the financing, Radisson expects to hold a 9.6% equity interest in Renforth, providing shareholders with exposure to potential upside through Renforth's other exploration projects in the district such as Parbec, Nixon Bartleman, Martic West, Denain-Pershing and Surimeau.

Laurentian Bank Securities equity research analyst Ryan Hanley said Radisson had about $8.5 million available at the end of July, which should cover the cash component of the New Alger acquisition, the company's investment in Renforth, and an increase in its drill programme to 75,000m from the currently planned 60,000m.

"Our NAV remains relatively unchanged after accounting for the transaction 65c per share versus 66c per share previously," said Hanley.

"From a financial perspective, the purchase price of about $4.7 million (based on Friday's closing price), equates to $19/oz based on the existing resource, or $25/oz should the contingent consideration also be included. We see this as a good deal for Radisson, particularly given the resulting increase in land position and exploration potential."

The analyst maintains a 65c target price and ‘buy' recommendation.

Radisson's share price (TSXV:RDS) hit a new 12-month high of C39.5c Monday, but last traded at 36c, capitalising it at $72 million (US$54 million). The stock has more than quadrupled in value in the past 12 months.