Harte Gold says its recently restarted Sugar Zone mine in Ontario, Canada, has achieved record throughput at 800 tonnes per day or more over consecutive days. 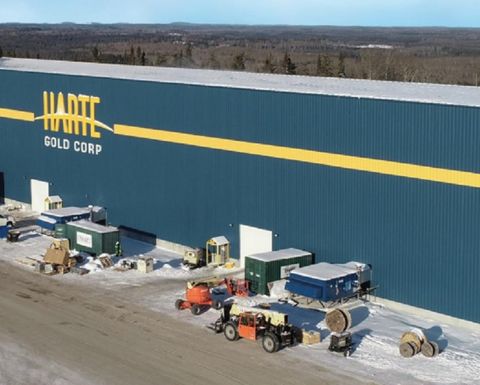 The operation spent three months on care and maintenance during a COVID-19-driven suspension which management used to plan improvements before restarting on August 5.

For August, the mill processed 19,685 tonnes which translates to record average daily throughput at 760t/d, factoring in planned downtime.

Gold output totalled 3,200oz, in line with growing production just before the shutdown.

Harte said mine development was progressing ahead of plan, with waste and ore development metres exceeding the plan for August by 32% and 59%, respectively. Ramp development is about two-thirds complete into the Middle Zone.

"The mine has not skipped a beat from where we ended prior to the temporary shutdown, and I am confident we can build on this performance going forward. With the recently announced financing now complete, the owner-operator transition in full swing, the feasibility study advanced, and exciting exploration to come, I believe Harte is well-positioned for a stronger future," said CEO Sam Coetzer.

An expansion feasibility study is advancing to take throughput to 1,200t/d and is slated for release by December.

The company is also progressing grade-control drilling to de-risk the orebody. It plans to mobilise a second drill rig this month to test the extent of the Middle Zone and complete infill drilling there and at the Sugar Zone South areas.

Meanwhile, Harte will also undertake further systematic exploration of its 79,335-hectare land package to find another mining unit, such as the TT8 prospect where summer exploration had identified three new showings with the potential to extend the mineralised 2.5km to the northeast.