Goldplat (AIM:GDP) has made a step towards lower production costs, optimising god recovery and increasing the life of mine at the Kilimapesa gold mine in Kenya by successfully installing and expanding a new processing plant. 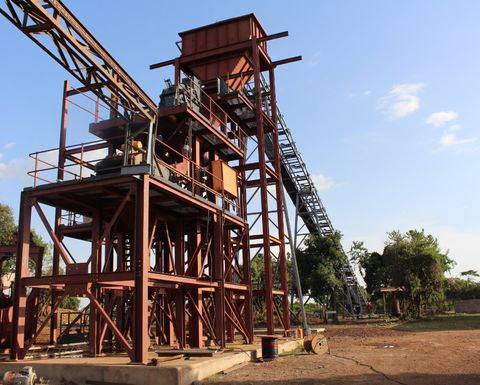 Goldplat's Plant 2 has reached a processing rate of 5,000tpm

It said the new plant was processing at a rate of 5,000 tonnes per month and it could therefore close the incumbent Plant 1.

The closure would initially result in reduced production, with gold production for the year to June 30 forecast slightly below 5,000 ounces, however, Goldplat management said the new plant should positively impact profitability of the mine due to the lower production costs per ounce.

"Without the economies of scale provided by Plant 2, the higher cost of production at Plant 1 requires a comparatively higher feed grade to make a contribution to the overall operation," Goldplat said.

"The fine material currently being processed through Plant 1 will be sent to Plant 2, where it will be processed directly through the classifier and the cyclone, bypassing the milling process, and increasing throughput with an overall improvement in the margin per ounce recovered."

The company said it would save further costs by restructuring labour, although the closure of the first plant would not lead to significantly reduced workforce numbers as employees would be reassigned to the new plant and the mine wherever possible.

Goldplat CEO Gerard Kisbey-Green said the company's focus at Kilimapesa and its other operations was to build production output and profitability.

"Having successfully executed a phased development plan to improve operational efficiencies at the mine by installing a new processing plant, we are delighted that Plant 2 is now established enough that we can continue running this plant as our sole processing facility," he said.

"This will have a positive effect on profitability and help ensure we operate a more robust operation moving forward."

The company aims to expand the new plant further on a modular basis when finances allow, with this including the erection of an additional thickener and CIL tanks, the installation of a second mill to be used when downstream capacity was increased; and the construction of a more cost-effective tailings dam layout.

Sourcing of material and finalisation of funding for Kilimapesa still issues

Goldplat production back at planned levels