Billing itself as the world’s newest senior gold producer, B2Gold (TSX:BTO, NYSE American:BTG, NSX:B2G) is within reach of the million-ounce-a-year production level it expects to approach in 2018. Flush with cash, the Vancouver-headquartered miner is preening feathers and paying back debt. 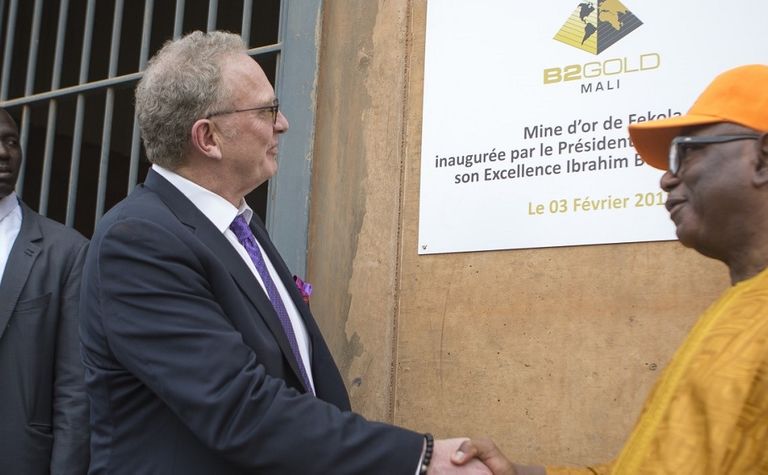 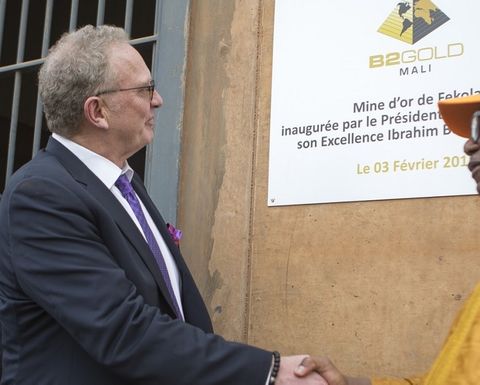 President and CEO Clive Johnson told Mining Journal the company had had a "tremendous" run up over the past decade or so, starting as a junior with zero gold production in 2007 to - at or near - one million ounces in 2018 at consolidated all-in sustaining costs (AISC) falling from US$1,091/oz in 2012, to a forecast $800/oz by next year.

"This year we are taking a bit of a breather from development and focusing our efforts on project execution, cost reduction and organic growth," avid rugby follower Johnson said. He is as colourful a character as veteran senior mine management come and brims with anecdotes and mining trivia as he outlines B2Gold's pedigree.

In his previous life, Johnson was at the helm of erstwhile miner Bema Gold, overseeing a 1,730% rise in the company's share price before Kinross Gold acquired the company in 2006 for US$3.1 billion. With Bema's second incarnation as B2Gold, the share price has already grown 620% since January 2009.

The company's most important asset, Johnson stressed, was a combined Bema-B2Gold management team with more than 270 years of experience - a "winning team".

"Many people were sceptical about our plans for B2Gold after the Bema days and they asked, can lightning strike twice on the same spot? And as we've shown, it can indeed!" he said.

Johnson explained that he was focused on growing shareholder value. This was why the company was "catching its breath" this year, focusing on being "the best B2Gold we can be".

Driving the company's strong first-half performance was the Fekola mine, in south-west Mali. Johnson described the asset as "an immediate value driver". It was a direct product of the B2Gold team's courage to be contrarian in down markets. B2Gold acquired the Fekola project via its $570 million takeover of Papillon Resources, at a time when very few, if any, mining companies were doing M&A. It was Fekola's contribution that helped drive an 89% increase in consolidated gold output to 479,777oz gold during the first six months of 2018, helping to drive consolidated AISC down to 17% below budget at $735/oz.

This translated to record consolidated gold revenues of $629 million - more than double that of the comparable six months of 2017. Importantly, the company's consolidated cash flows from operations rose 165% year-over-year to $233 million.

At the end of the June quarter, B2Gold had cash and cash equivalents of $107 million. Combined with its growing cash-flow profile - projected to average about $500,000 million per annum over the next three years, starting in 2018, and assuming a gold price of $1,300/oz.

The company is planning to pay back debt. This includes the anticipated repayment of the company's $259 million convertible notes that mature on October 1, unless the notes are converted into shares at $3.93 apiece prior to that date. Johnson projects that at the current gold price, the company will have sufficient liquidity to repay the notes in full and still maintain a strong cash position. 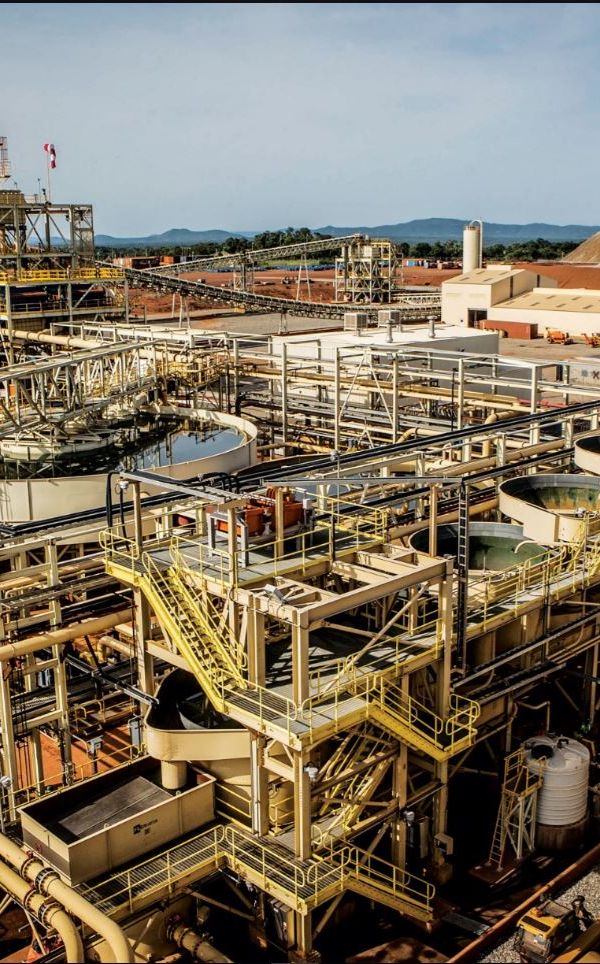 Fekola has been a significant value driver for B2Gold

B2Gold, with a current market value of about C$3 billion, has outperformed its peers with production growth of 71% between 2016 and 2018. Since 2010, it had also outperformed its mid-tier peers on shareholder returns, increasing 121% in the period.

Johnson bemoans the fact there is nothing like "another Fekola" out there at present, the result of exploration budgets having been gutted for so long.

"I'm a firm believer in economic geology. We are not gold bugs. We don't operate under the assumption that gold needs to go higher in order to make our work worthwhile. The cheapest ounces you find are in the ground, not the ounces that you've paid for."

As with Bema, Johnson outlined how discoveries had driven value. "We were born out of exploration, twice."

He laments the fact that there are still too many life-style mining shell companies taking the few investment dollars away from where it is really needed.

In his opinion, the ‘accountability factor' had also damaged mining's investment attractiveness in the recent past, where too many senior management teams bled treasuries with exorbitant compensation packages and bonuses, when in fact, those firms were not creating value for shareholders.

At this time, Johnson is not overly bullish on mergers and acquisitions, preferring to "look at what we've got" for now. But that does not count any accretive deals out. "We've had very successful additions to our portfolio over the years. The rules are simple; you have to maintain discipline and take a contrarian approach. We buy when others try to survive.

"We will never acquire a project that needs a higher gold price than the current environment or exploration success to be profitable. We have the luxury of being somewhat ambivalent towards the gold price, because of our low-cost profile."

The company plans to release a new mineral resource on Fekola in the fourth quarter, and expects organic growth opportunities at the property to continue to create value for shareholders. "I'm a big believer in creating value through the drill bit," Johnson said.

When considering mergers and acquisitions, he says the team do deep-dive due diligence before making a move on any asset. This is where the team's ‘experience factor' plays an invaluable role.

Unlike most major gold producers, B2Gold is adept at exploration, and therefore is very discerning about the projects it does get involved in. Out of about 600 exploration and development opportunities, B2Gold had made deals with eight juniors, Johnson said.

He stressed B2Gold's commitment to being a responsible corporate citizen. Over the years, the company had proactively implemented a host of projects in the communities in which it operated, winning the goodwill of politicians and locals alike. "It's our holistic approach to engage with stakeholders from the outset that has added to our success."

As proof, he points to the recent announcement that Mali decided to acquire a further 10% stake in Fekola to lift state ownership to 20%. "It demonstrates our positive relationship and goodwill towards each other."

Johnson is excited about the significant exploration upside across the company's portfolio.

The El Limon Central zone is at its closest location about 150m from the mill facility, extending southeast and northwest. The company is currently working on a study to examine the potential for a mill expansion, the results of which are expected in September.

A further catalyst is the new mineral resource statement for the Fekola deposit - which the company intends to release early in the fourth quarter of this year - due to the increased size of the mineralised area that includes a portion of the Fekola North Extension zone. The engineering team is currently conducting engineering/technical studies to determine the potential of expanding the Fekola mine and mill facilities to increase tonnage throughput beyond its current 5.5Mtpa rate, thereby increasing annual gold output (if, as expected, a larger open-pit resource is confirmed). Results will be available by year-end.

B2Gold's exploration team believes that Fekola regional exploration has the potential to host additional, large Fekola-style gold deposits. "The Fekola ‘snake' prospects, about 20km from the Fekola mine, have great exploration potential. We are aggressively following up with drill work to see if we can find the next Fekola there," Johnson said.

At the Masbate mine, in the Philippines, B2Gold continues to outperform. A mill expansion is underway to increase throughput from 6.8Mtpa to 8Mtpa - expected to be on line in early 2019. This expansion is expected to keep annual gold output at about 200,000oz during the mining phase and above 100,000oz when the low-grade stockpiles are processed at the end of the openpit mine life.

B2Gold's Kiaka project in Burkina Faso, a 4Moz deposit, is one of the largest undeveloped gold resources in West Africa. However, Kiaka requires a higher gold price or nearby exploration success to become economically viable. As part of the Kiaka acquisition, the company also acquired several exploration licences, including Toega, which lies north of Kiaka. Based on last year's drill programme, in February, B2Gold announced an initial inferred resource of 17.5Mt grading on average 2.01gpt, containing 1.13Moz of gold.

"Drilling is ongoing to determine the ultimate size of the main Toega zone and further test additional targets adjacent to Toega," Johnson said.

Andean lists on TSXV with San Bartolome in Bolivia

Idaho mining circa 2021: The road ahead