Mining tech stalls, on the surface

Miners are currently spending as little money as possible to lever some of the business improvement gains supposedly on offer from ‘disruptive’ technology, so there has certainly been no explosion yet in tech-spending as the industry continues to focus on debt reduction and very selective project delivery. Is it around the corner? 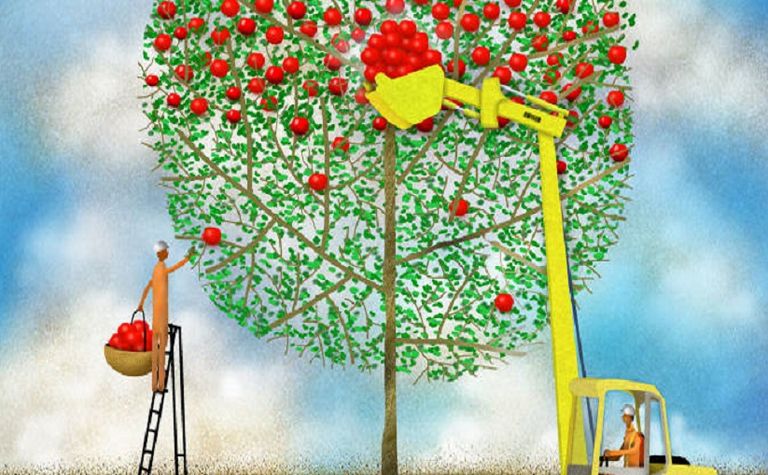 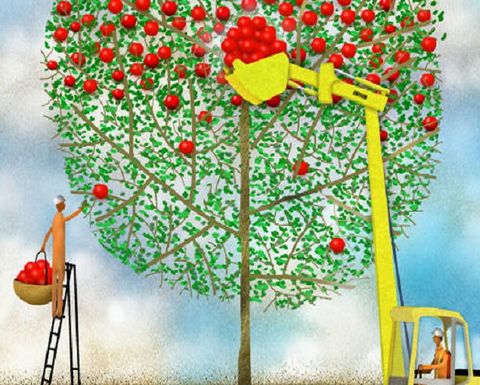 "Certainly not this year," said a senior executive with a mid-ranked mining IT company, who asked to remain anonymous. The company counts a number of the world's top miners as key customers, and has not seen its order pipeline refilling.

"We are more optimistic about 2017 because there is still a lot of pressure on companies [miners] now to get balance sheets in order [at least partly through asset divestments] and get capital budgets re-set. There also seems to be hope amongst too many mining company executives that [stronger] commodity prices will come to the rescue.

"We, and we believe a number of our peers, see the companies that are making technology-led business improvements a differentiator getting stronger and forcing others to follow."

Large technology supply corporations with modest (relative) exposure to the mining/metals space, such as those in the table below, have essentially put businesses enlarged organically and through acquisitions during the mining boom back into R&D mode - though some argue this looks more like a complete state of hibernation. Certainly sales have stagnated, and gone backwards.

But organisations such as Dassault Systemes, Caterpillar, Hexagon and SAP say they are investing heavily in mining-related R&D with a view to the industry continuing its fairly recent mantra of "getting smarter" for the sake of investors, into the future. A problem they still have with mining is that the industry has far less idea about what the future actually looks like - the orebodies, the geopolitics, the levels of substitution, water and energy availability, the mobility of labour, etc - than most other industries that have led on technology adoption. So returns on that R&D investment are, like mineral exploration, somewhat pie in the sky.

Still, if a sector such as coal doesn't see application of technology that has been fundamental to improvement in other industries, as key to its survival now, then it clearly has some problems believing its own messaging about its role in the world's future energy mix.

"It has become increasingly necessary [for miners] to go beyond traditional approaches to productivity improvement, which often focus on the efficiency of physical assets," BCG says.

"Technologies such as robotics, the industrial internet, real-time data monitoring, and analytics have radically transformed manufacturing and production processes in a range of other industries. Industries with controllable environments—those under one roof, such as automotive manufacturing—have integrated their processes end-to-end using automation.

"Mining, however, is a geographically dispersed business with inherent variability in geology and weather. The use of advanced technologies has thus often been seen as a difficulty. Today, however, some companies are discovering opportunities to use automation and the industrial internet to drive greater integration throughout the mining value chain.

"Apart from their many other benefits, such as greater employee safety and lower environmental impact, next-generation mining techniques are fundamentally a means of improving productivity. Autonomous drilling, trucks, and trains allow companies to achieve massive gains in surface mining, as well as greater yields in mining more complex deposits.

"There is still great potential to create value in mining, and moving beyond basic productivity is one avenue for doing so."

Mining's global technology landscape has changed a lot over the past decade or so.

The biggest companies, or businesses, in the mining technology space are business enterprise software suppliers such as SAP, ABB and Oracle, computer hardware vendors - again more office than field focussed, and fixed-plant monitoring, control and automation technology suppliers. Miners were using technology to control and manage (and automate) concentrators, refineries and smelters long before they entertained the idea of using similar systems to run trucks and drilling fleets. And the shift into mining and metals for suppliers of technology to manufacturing and other industrial process plants was not a major one.

But all these ‘mining' businesses are generally buried in vast corporations (see table).

Leading, smaller suppliers deriving most of their income from mining-related products and services include technical software, vehicle control and guidance, safety and training, mineral processing and exploration technology vendors.

Developers and suppliers of ‘GMP' or general mine planning software, perhaps a US$200-250 million a year market segment when the industry is buoyant, have found growth in ‘new' markets such as China, Russia and others adopting Western reporting, modelling and planning standards and methods, hard going. They've been acquisition targets for large, non-mining-focussed technology firms as much for their connections to miners and mine developers, as their products and IP.

Mine production management systems - mainly software and vehicle sensor, recording and communication devices - have represented a growth market for a select few companies in the past decade or so. Those companies being Caterpillar, Komatsu, Hitachi, Hexagon and, to a lesser extent, Micromine.

Growth has also been seen in the ‘technology services' area, particularly around mine-site technology implementation and optimisation (consulting and engineering), mine-to-port supply chain optimisation, and automation and remote-operations centre system delivery and optimisation. Again, though, leading companies are a mix of large enterprises ‘doing a bit of mining on the side', and very small specialists with either a handful of large mining customers to keep their businesses ticking over, or relationships with bigger supply firms. 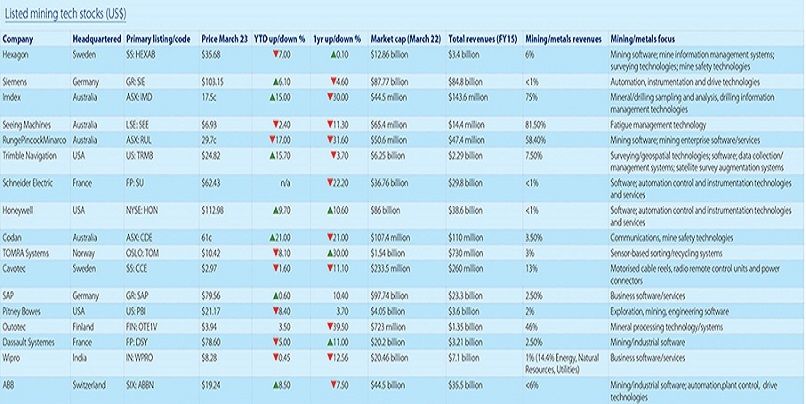 Concerns expressed about a "narrow" global mining technology supply base by a number of respondents to Mining Journal's 2015 Future of Mining survey of 200 of the world's significant mining companies resonated with several mining-tech firm leaders. One said: "The narrow global supply base possibly slows innovation or uptake of new technologies. Mining is a difficult industry to introduce a new product or technology to, and this is a significant barrier to entry for new tech vendors. The industry is cyclical, and right now we are near the bottom of the cycle - I hope. This has put all existing and particularly smaller tech vendors under some extreme pressure, and R&D budgets get trimmed. To then ramp up those R&D programmes again when better business conditions turn around means that new commercial tech products do not appear in the mining industry until well - often years - into the cycle. It is a relatively niche industry, and investment dollars are not there like in other technology segments.

"Growth and consolidation of tech developers who will be able to maintain R&D programs through the cycle will see improvement here.

"I would also add that some mining companies only see a narrow supply base because they look with one eye shut, but I am sure those are probably isolated cases."

Peter Johnson, managing director of one of the world's largest privately-owned mining technology developers and suppliers, Maptek, said an end to the sector's traditionally long - and damaging - innovation cycles could be on the horizon, which could only favourably change the road travelled by (now) 30-year-old firms such as his.

"Miners are traditionally very cautious adopters of technology, and conservative in the face of tech risk," he said.

"There is a sometimes equally long sales cycle after the innovation and development is done. I think we are gradually seeing change here, and it is firmly driven by generational change at the end user level.

"The recent mining boom was very successful in attracting a lot of kids to go and study engineering or geology and take up professions in mining, which is terrific. These are the people of the industry tomorrow.

"This has also driven some technology change as well, as these young people have grown up with computers, I-phones, WiFi, touchscreens, sharing data, etc, as a ubiquitous part of their lives. So, they come to the mining industry and they have a) an expectation that all those new technology features that are there throughout the rest of their lives will be at their disposal at work, and b) they accept it and use it readily, quickly and easily when it is delivered.

"Young people will drive the next big leaps in mining technology innovation.

"Unfortunately, the long sales cycle can put a small company out of business while they wait for sales success with our large miners. Multiple layers of risk aversion causes this, and retards innovation, lengthening the cycle."

Johnson said technology projects would need to deliver tangible immediate impact to the dollars-per-tonne or number-of-tonnes balance to get investment, and even then there would only be a minimum of resources available to implement and deliver a project.

"There will be - and is now - fewer people around and in mining companies to plan, build, deploy and manage IT and technology systems," he said.

"Outsourcing budgets to IT contractors will be squeezed, and the number of technology projects at mining companies will be minimal."

Johnson said another key trend in mining was the continued development of the connectivity and communications environment at many sites.

"The range of sensors and data sources within the scope to be applied to mining continues to grow - quite quickly I think. I have flagged the Internet of Things concept as a key area to watch in mining before and I still believe this is happening. Equipment, systems and machines enabled and equipped to collect, communicate and even act on information flowing within the mining environment … with people interacting at some points, but more and more a closed system of production data flowing from the orebody knowledge to the shipped product reports."

"That is key to minimising dollar-per-tonne mined, and maximising tonnes."

Fewer people managing and implementing technology means a drive towards more out-of-the-box integration and interoperability, according to Johnson: commercial off-the-shelf, single-vendor, single-source technology suites that deliver the biggest bang for the least buck, and require the least amount of customisation or deployment effort and support as possible.

"Connectivity and communications enhancements make this possible," he said.

"We see a lot of new sensors, new data sources coming in to mining, but there is still a long way to go here and the next few years will see a huge growth in the amount of data collected in a mining operation and the number of different processes where that data delivers some benefit.

"A lot of these are still being developed or introduced, and there is a lot of innovation happening. This is a very exciting area which will dramatically increase the ability of miners to concisely measure, control and manage the mining operation in real time and apply different paradigms to effect improvement."

Johnson said "technology spaghetti" had to disappear from the menu in future.

"The inefficiencies of having a disconnected or fragmented data model and systems architecture across a mining company, or significant delays in accurate data being validated and available for decision making - particularly in the production management spaces, but also in planning - far outweigh any benefit that may be obtained by allowing individual disciplines, departments and sites to architect tailored technical systems independently," he said.

"The expansion of integration effort, data loss and process inefficiency that can result from this as a long term strategy is something we have seen often - it is technology spaghetti, and expensive.

"An operating template and process model that can be applied to mines and operated reliably, consistently and which provides an accurate, accessible view of the state of the mine is essential and will allow a production management mindset moving towards quality management and continuous improvement."

The race is on to process lithium in Europe