The most recent step-out drill results from Integra Resources’ (TSXV:ITR) DeLamar gold-silver project in Idaho, have extended the Sullivan Gulch deposit by 250m. 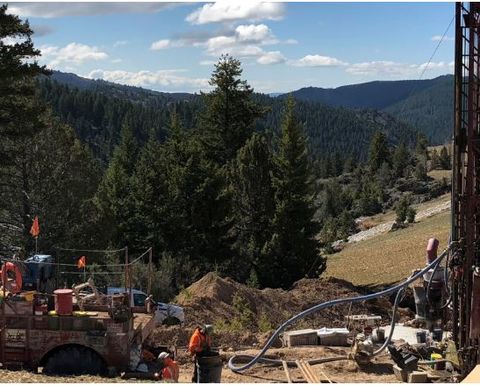 Integra is demonstrating strong potential for significant resource expansion at DeLamar, in Idaho

Results from both step-out and infill drilling continue to confirm gold-silver mineralisation continuity and future resource expansion potential to the south-east of Sullivan Gulch, CEO George Salamis told the Precious Metals Summit at Beaver Creek, Colorado. "How big can it get?" he asked, rhetorically.

He said most of the reported summer drilling results were well outside of the current inferred resource and mineralisation remained open.

"I am very happy with the results. The results contain thicker intercepts and some of the grades encountered were more than double the average resource grade," he said.

According to Salamis, the drilling was systematically showing just how much mineralisation previous operator Kinross Gold left behind.

He pointed out the results from a new induced polarisation (IP) survey suggested a geophysical anomaly at Sullivan Gulch extending 500m beyond these step-out intercepts to the south-east.

Initial IP surveys portrayed a very strong correlation between the existing inferred DeLamar resource outline and high IP chargeability. Subsequent surveys have highlighted a strong IP anomaly in Sullivan Gulch that extends 500m beyond the last fence of drill results. This IP anomaly has now delineated a target 1.2km in length at Sullivan Gulch, a zone that was not mined by previous operators.

"The new zone at Sullivan Gulch, along with the IP chargeability on the project, could potentially double the prospective footprint of the existing DeLamar deposit trend," Salamis said.

Meanwhile, drilling on additional targets at Delamar  continues to confirm "impressive" resource expansion potential in areas such as Glenn Silver, Sommercamp and others.

"How big can it get? Step-out drilling at 200m spacing are expected to grow the resource, while we continue to look deeper under the former producing DeLamar mine pit" Salamis said.

Kinross previously only drilled to about 100m depth and Integra had now drilled below and found a lot of "encouraging" mineralisation.

"Drill holes aimed to test beyond the margins of the current inferred resource envelope have returned with positive results that have the potential to significantly grow the resource. This summer's drill programme has strongly demonstrated the potential for resource growth at multiple targets on extension from the known inferred resource at DeLamar."