BMO Capital Markets held the top rank in the latest global mergers and acquisitions league table of the top 10 financial advisers for the metals and mining sector by value and volume in the first quarter of 2020, data analytics company GlobalData says. 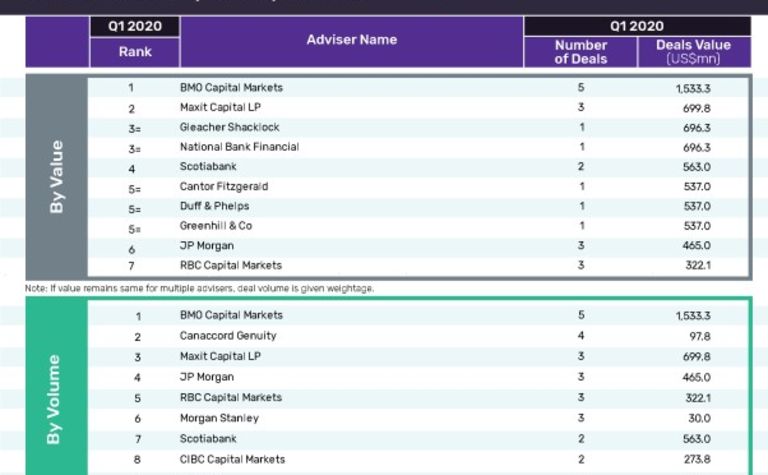 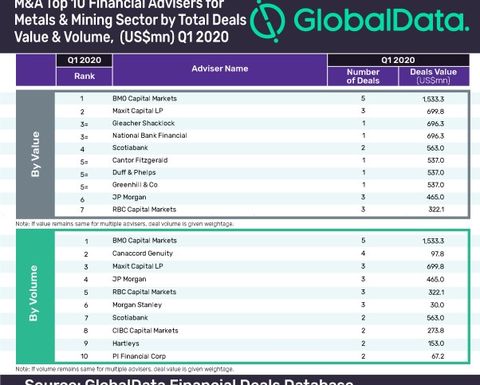 The Canadian investment bank took the top spot, advising on five deals worth a combined US$1.53 billion. GlobalData, which tracks M&A, private equity-venture capital and asset transaction activity around the world, confirmed Maxit Capital was second with three deals worth $699.8 million.

In terms of volume, Canaccord Genuity took the second spot with four deals worth $97.8m, followed by Maxit Capital.

"The metals and mining sector witnessed a drastic decline in deal value in Q1 2020 compared to Q1 2019. Under this environment, BMO Capital Markets was the only player to cross the $1 billion mark," said financial deals analyst Aurojyoti Bose.

"On the other hand, the total value of deals advised by three of the top 10 firms by volume was even less than $100 million."

GlobalData statistics show the metals and mining sector saw a 72.77% year-on-year decline in deal value in the first quarter, falling from $21.9 billion to $6 billion in the most recent period.

Meanwhile, legal firm McCarthy Tetrault led GLobalData's M&A legal advisers listing, based on deal value in in the quarter, after advising on two deals worth $748.4 million.

Runner-up was Davies Ward Phillips & Vineberg with one deal worth $696.3 million.