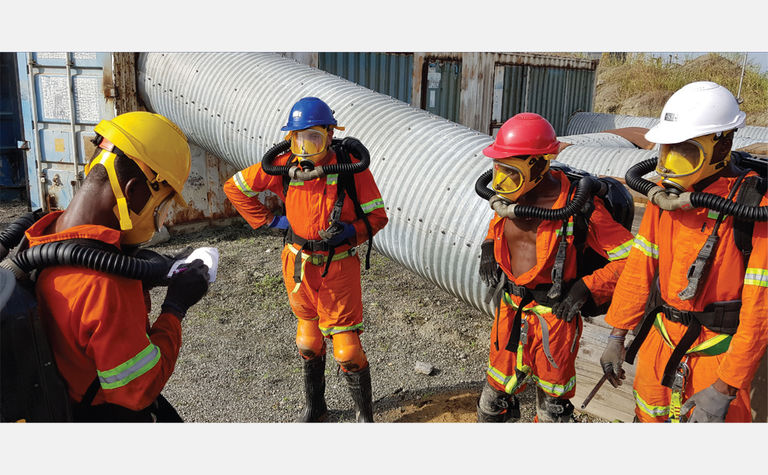 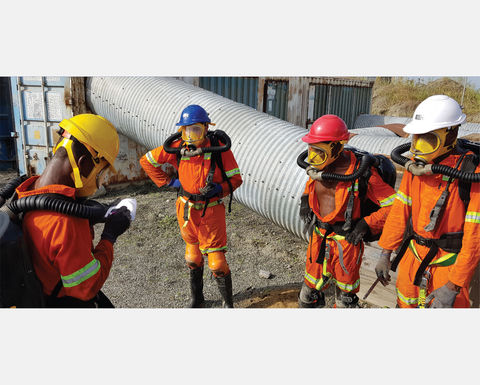 “The provision of healthy and safe workplaces for our employees, our most valuable asset, is one of our fundamental responsibilities”

Prior to the civil war, Sierra Leone had established an active mining sector built upon significant exports of diamonds, rutile and bauxite. The sector underpinned much of the country's formal economic activity, contributing 20% of GDP, as much as 15% of fiscal revenues, and accounting for more than 90% of exports. Mining and quarrying provided a livelihood for over 250,000 people, and employed about 14% of the total direct and indirect labour force. Despite the sector operating at only a fraction of its potential, its contribution was significant enough to qualify Sierra Leone as a resource-rich country.

The end of hostilities marked the start of a strong economic recovery.

The diamond mining sector has played an instrumental role in Sierra Leone's nascent economic recovery. Official exports have increased to 582,000 carats in 2006, with 84% of this amount being mined by artisanal and small-scale miners.

The World Bank has estimated that up to 40,000 people are directly engaged in mining for diamonds and that the associated population of immediate family dependents could include 100,000-to-200,000 people. If those people that are indirectly dependent on artisanal diamond mining through forward and backward linkages are included, the World Bank estimate reaches 200,000-400,000 people dependent upon artisanal mining for the greater part of their livelihood. This represents 4-8% of the population.

In recent years, economic growth has been principally driven by mining. The country's main exports are iron ore, diamonds, and rutile, and the economy is vulnerable to fluctuations in international prices. The mining industry accounted for 4.5% of the country's GDP in 2007 and minerals made up 79% of total export revenue with diamonds accounting for 46% of export revenue in 2008.

The Ebola outbreak of 2014 and 2015, combined with falling global commodities prices, caused a significant contraction of economic activity in all areas. In 2017, increased ore exports, together with the end of the Ebola epidemic, supported a resumption of economic growth.

To ensure optimal contribution to national development, the Sierra Leone Government is committed to promoting transparency and accountability. In 2014, Sierra Leone became a country compliant with the Extractive Industries Transparency Initiative (EITI) process. The Peace Diamond Alliance (PDA) was created and the Kimberley Process Certification Scheme (KPCS) implemented, all fostering a stable and conducive environment for effective, legal and transparent mining practices. 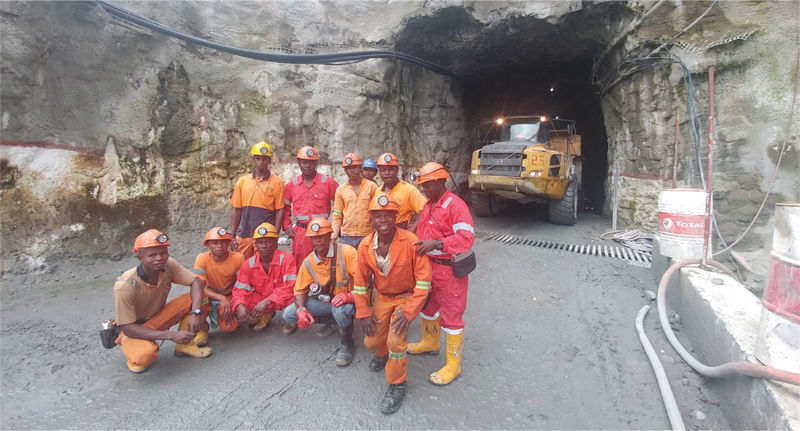 Koidu supports education through granting of scholarships in various fields of studies, benefiting more than 280 Sierra Leoneans since 2011

Koidu is 334km east of Freetown, the capital city of Sierra Leone, and falls within the Kono district.

Since its inception Koidu Limited has been committed to responsible and ethical diamond mining.

Four of the top-20 largest rough diamonds recovered globally were unearthed in Sierra Leone, all of them recovered contiguous to Koidu's ground.

"This serves as an additional booster for stakeholder and investor confidence, which currently benefits the state and operators alike," a Koidu spokesperson said.

In 2009 Koidu embarked on a bankable feasibility study (BFS) that would later form the basis of an expansion project. The BFS was carried out to attract further investment from the stakeholders and shareholders by defining the resources hosted within the mining concession within an acceptable level of confidence.

The BFS defined the resources available, through the extraction of kilometres of core which was studied - down to a microscopic level - and modelled in 3D to assess the feasibility of continued open-pit mining. This 3D geological model formed the crux of the future of the mine and confirmed the viability of the expansion project.

Once the mine plan was concluded along with the mining rates, optimisation of the processing plant design was finalised. Since an upgrade of the existing 50 tonnes per hour (tph) plant was not deemed feasible, a new processing plant and associated infrastructure were designed and built, which enabled a higher throughput capacity and a quicker return on investment.

In 2016, following the completion of openpit mining on the K1 and K2 pipes, the company transitioned to underground mining operations.

The fourth cutback on K1 was deemed uneconomical with the strip ratio at 27:1. But the three completed cutbacks enabled more than 3Mt of ore to be mined to about 300m vertical depth from the open pit.

K2 saw two cutbacks and about 2Mt of ore mined to circa-200m depth.

The transition from open pit to underground at K1 is well underway and Koidu has developed more than 6km of underground tunnels to service sub-level open stoping underground operations.

In September 2015, the UN member states agreed on a set of 17 Sustainable Development Goals (SDGs), which represent the global agenda for equitable, socially inclusive, and environmentally sustainable economic development to be reached by 2030.

Koidu Limited has the potential to significantly contribute to the achievement of the SDGs in Sierra Leone.

Through its corporate social responsibility and its operations, the company promotes direct local employment to over 800 people and forward and backward linkages directly or indirectly associated with their employment, including family members of miners and those engaged in miniature jobs for the miners, generating increased labour opportunities. In addition, through its partners, contractors and service providers, the company generates additional employment opportunities.

Koidu supports education through granting of scholarships in various fields of studies, benefiting more than 280 Sierra Leoneans since 2011.

Through the Community Development Agreement (CDA) the company funds local projects in co-operation with communities. Through partnerships with government and civil society, Koidu ensures that benefits of the mine extend beyond the life of the mine itself, fostering a positive impact on employment generation, economic growth, environmental sustainability and social capital.

Koidu is committed to responsible mining, limiting waste production, safety, incorporating sustainable technologies to promote the wellbeing of local communities, curbing emissions, and improving environmental sustainability. Committed to the SDGs, the company has benefitted from improved relationships with the government of Sierra Leone and the various communities in which it operates.

"Our most important responsibility is to fulfil the expectations of our stakeholders and to continuously improve our social, environmental, and economical performance while ensuring the sustainability and operational success of our company," Koidu's spokesperson says.

"The Corporate Social Responsibility (CSR) approach is our main guiding principle in this matter. We evaluate all of our operations and their impacts on the communities, in which we operate, while considering social, economic, ethical and environmental impacts.

"With the co-operation of CSOs and NGOs in our operating region, we launched a number of social projects focused on stimulating environmental awareness, preserving nature, and assuring sustainable development in our communities.

"The provision of healthy and safe workplaces for our employees, our most valuable asset, is one of our fundamental responsibilities. We determined occupational health, safety and fleet safety as priority areas for improvement.

"With this in mind, we aim to strengthen our occupational health and safety department, through onsite training and equipment provision."

Koidu conducts stakeholder engagement efforts within the framework of national and international principles and system applications. "We support sustainable development in communities where we operate and contribute to the welfare of society through Village Resettlement Committees (VRCs)," the spokesperson says.

"A total of 357 houses have been completed since 2012 under the Resettlement Action Plan RAP2 and residents within our operational areas have been satisfactorily resettled. A total of 132 houses are presently under construction by 25 contractors employing over 800 skilled and unskilled workers from the local community.

"A new site for the planned construction of the next 72 houses has been demarcated and the completion is expected by the end of August 2018."

Apart from the company's taxation and royalty payments at local and national levels, Koidu contributes to the economic development and growth of the country by leveraging on its investments at local level - building new infrastructure, introducing new technologies, increasing knowledge transfer, training and workforce opportunities.

Formal education and specific vocational training can lead to qualified jobs in this sector. This know-how can then be used in other parts of the industry/manufacturing sector and support structural transformation in the economy.

The company plans to generate new economic opportunities for citizens and local communities, including jobs, training, and business development relating to mining operations, associated service providers, or new local economies linked to the mine.

"This will help drive economic development and diversification through direct and indirect economic benefits and by spurring the construction of new infrastructure for transport, communications, water and energy," Koidu's spokesperson says. "The company will continue striving to achieve the right balance between business and social development, environmental protection, sustainable development and investment promotion."