AngloGold Ashanti has filed an appeal to reverse the decision to file its environmental license application for the Quebradona gold-copper project in Antioquia, Colombia. 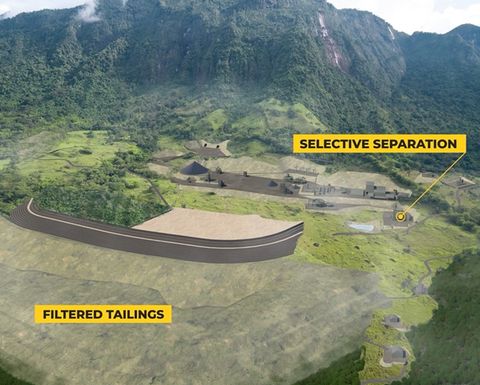 A render of AngloGold Ashanti's Quebradona proejct in Antioquia, Colombia

The country's ANLA National Environmental Licensing Authority decided to archive the project's environmental impact study in October on the grounds that it does not have enough information to decide on the viability of the project. This despite having conducted two site visits over the three-year process and having received additional information in response to its numerous requests for clarifications by its multi-disciplinary team of experts.

ANLA has a matter of months to review and potentially amend its decision.

The US$1.2 billion project, the largest development stage project in Colombia, is slated to produce 137 million pounds a year of copper concentrate over a 22-year phase one mine life from a sub-level caving operation.

Prior to entering the environmental permitting process Quebradona was declared a project of national interest, which enabled it to be assessed by ANLA rather than the local environmental authority with oversight from the office of the country's president.

The ANLA decision came barely a month after the Secretary of Mines of Antioquia approved the project's works plan to extract copper, gold, molybdenum and silver.

AngloGold decided to appeal after conducting a technical and legal review of the reasons given by ANLA for its decision to archive its application.

"Both the environmental impact study presented, as well as the additional information provided in response to the requirements made by ANLA, contain the broad and sufficient information required to make a substantive decision on the project in accordance with the terms of reference for large mining, issued by the Ministry of the Environment," the company said.

Delegates talking on the sidelines of the CGS2021 gold and copper event held in Medellin this week believe ANLA's decision to archive the process was a means of kicking the can down the road, potentially to the next government, without opening the country up to a lawsuit under international investment protection laws, which may have resulted if the permit application was denied.

The filing of the appeal means ANLA will carry out a new exhaustive review and a substantive analysis of all the information provided, reconsider its decision, continue the evaluation of the environmental project, and proceed with the call for a public hearing as part of the environmental licensing process.

The project is opposed by some of Antioquia's business elite which have recreational fincas or farms in the same district as the project. Comfama, a private, autonomous and state-supervised family compensation fund which seeks to improve the quality of life of workers and their families, proposed building a recreational park near the Quebradona site in order to derail the project.

ANLA reached the same non-decision a year ago for Minesa's Soto Norte gold project in Santander, leading sector participants to question the ability of ANLA to fulfil its function, and whether or not it is as politically independent as it should be, particularly as the text of the communication used almost the same wording.

Volumes fall on outage at Obuasi mine

Working ahead of closure