The World Diamond Council has completed its first mission to Angola outside of formal Kimberley Process (KP) meetings. 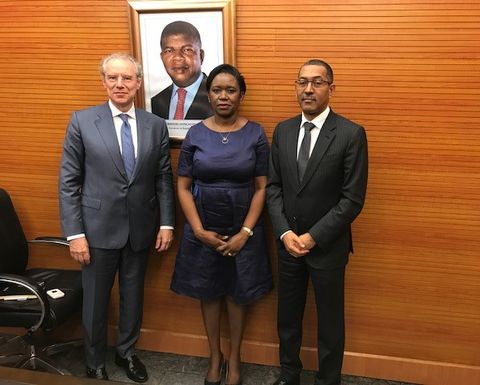 WDC acting president Stephane Fischler and executive director Marie-Chantal Kaninda were in Angola last week at the invitation of the Angolan government.

They met with KP stakeholders — including the minister of mineral resources and petroleum Diamantino Azevedo —   to discuss the ongoing reform of the KP, including the challenges and opportunities related to the scope of the definition of conflict diamonds, as well as lengthy talks on the important efforts being taken in Angola to formalise the artisanal mining sector.

The WDC noted that, although artisanal mining only represented 20% in volume of global overall diamond production, it was an area that required the most progress in safety, security and fair wages.

The meetings were met by broad support from the Angolan representatives for reform of the KP and the establishment of the KP permanent secretariat.

The visit was part of a larger initiative to raise awareness of the challenges and opportunities faced by African countries that participate in the KP.

It is estimated that 60% of the world's diamonds come from African countries and in Angola, they are the second biggest export, bringing in US$1.1 billion of gross revenue last year.

So far this year, the WDC has met with the Antwerp World Diamond Center and the president of Angola in Antwerp, and travelled to the Democratic Republic of Congo in May to meet with the country's KP stakeholders.

Fischler noted that, with diamonds being critical to African economies, it was critical to engage directly to reach a more sustainable global diamond industry, as well as bringing social and economic benefits to local communities and ensuring fair income to African governments and their trading partners.

"This mission is yet another example of our commitment to this process and to fulfilling the duty of care we all owe to local communities where diamonds are produced, as well as to global consumers," he said.

Kaninda said the WDC had seen strong support from the parties it had met in Angola and the DRC.

"As we begin to plan more visits with other African governments to raise awareness around ethical artisanal mining production, I am confident that together we will achieve the goals of improved prosperity for diamond producing nations, communities and citizens," she said.