Canada-based junior Metalex Ventures is adding an interest in a “sought-after” diamond exploration project in South Africa to its assets in Ontario, Quebec and Morocco. 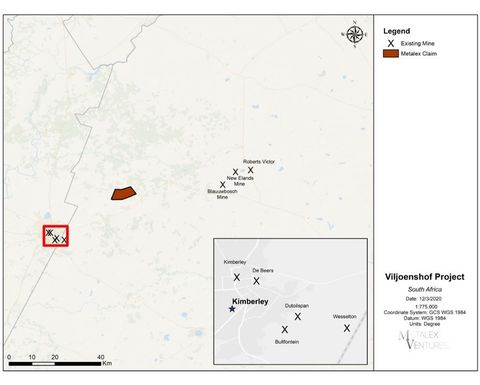 The Charles Fipke-chaired Metalex said it had reached an agreement to acquire up to 70% of the Viljoenshof prospecting license, located within 30km of the Kimberley diamond mines in South Africa, from Invest in Property 126.

Fipke is credited with the discovery of what is now the Ekati diamond mine in Canada's Northwest Territories.

"De Beers unsuccessfully applied for the exploration license over this area again in 2014, as IIP applied shortly beforehand and was awarded the license," Metalex said.

"Metalex looks forward to advancing this sought-after project, located close to the first kimberlite mine in the world."

Under the proposed staged earn-in, Metalex would fund a R250,000 conversion from a prospecting licence to a mining lease to acquire a 20% interest.

Funding bulk sampling and paying IIP $100,000 would earn a further 10% and the Metalex would gain the final 9% by completing a feasibility study, with a further $100,000 payment to IIP due on a decision to proceed with mine construction.

A day earlier, Metalex had said it was reviewing financing options to fund exploration at its recently-staked gold claims in Quebec.

In connection with a financing, Metalex was proposing to consolidate its shares and settle debt related to exploration expenses totalling C$2.75 million, owing to companies associated with Fipke, by the issuance of shares.

It had a working capital deficit of C$3.9 million at July 31.

Demand from US is strong