Latin America continued to be the most popular exploration location in 2017, with the region claiming a 30% share of the global exploration budget. 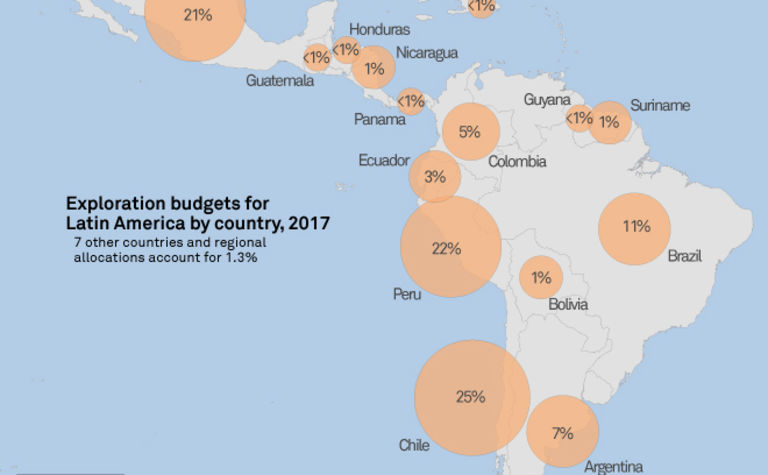 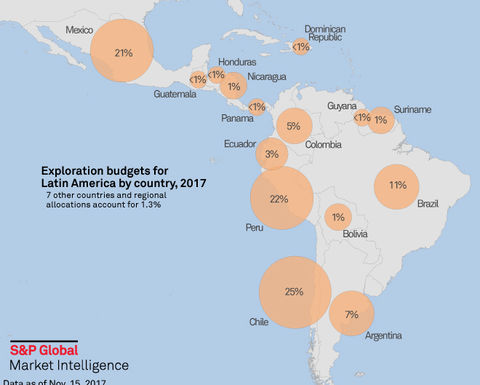 S&P Global Market Intelligence's mining and metals research team's Alex de Leon said the total exploration budget for the region rose 20% year-on-year in 2017 to US$2.38 billion, with its share of the global budget up from 28.5% in 2016.

In the December quarter, financing for the region climbed to $1 billion, up from $426 million in the September quarter.

According to Mining Journal's World Risk Report 2017, South and Central America have a combined average investment risk index rating of 62.5/100, with Chile, Peru and Mexico all receiving ‘A' ratings with an index of over 70/100.

De Leon also named these countries as the top three in the region, with them claiming 25%, 22% and 21%, respectively, of the region's overall exploration budget, and 68% collectively.

This is not surprising, as copper generated the highest total production revenue of $53.6 billion for Latin America, according to S&P, and these three countries account for most of the region's copper reserves.

Capital investment for the year was mainly focused in the copper arena where announcement funding totalled over $9 billion, followed by lithium and then gold, which were both over $3 billion, de Leon said.

During 2017, most drilling was carried out during the March and December quarters, with drill holes totalling 1,853 and 1,972, respectively.

S&P said gold had been the most targeted commodity in terms of the number of holes with significant drill intervals, with silver and copper following closely.