ASX standing taller but for how long?

The ASX was comfortably the happiest hunting ground for resources companies looking for capital compared to the other key mining exchanges but signs were present that the doors were closing, according to findings of the new Mining Journal Global Finance Report 2019. 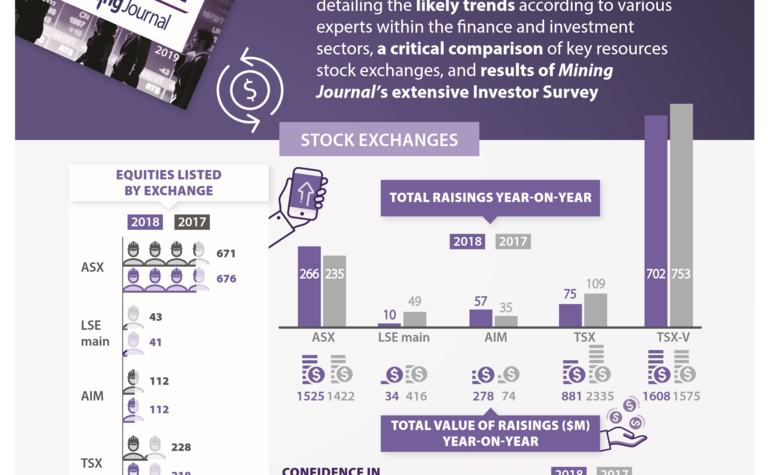 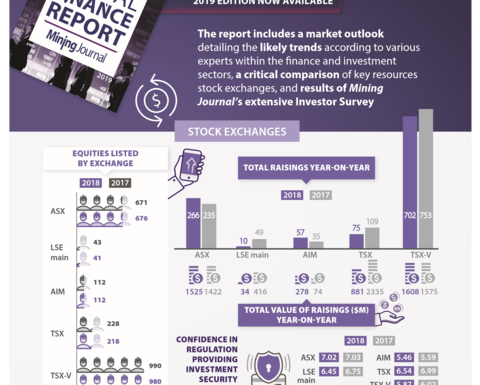 Out of the ASX, LSE main board, Alternative Investment Market, TSX main board and TSX Venture, the Australia bourse was the only market that managed to improve on key financing metrics year-on-year.
The ASX increased the number of initial public offers listed for the 12 months to take the total number of companies listed to 676, while a fall in listings and natural attrition of equities listed on other exchanges saw their numbers fall.
The TSX-V was still home to the largest number of companies at 979 but this is 11 companies less than last year, while the main board in Toronto shed 12 companies. AIM was flat but the LSE main board lost two of the 43 companies listed in the previous period.
This activity level was reflected in the financings achieved across both IPOs and secondary raisings.
Though the TSX-V remained the greatest source of capital by virtue of the number of companies listed, the number and value of financings fell year-on-year and was only narrowly ahead of the ASX for the 12 months under review.
Companies visited the TSX-V 702 times to raise just over $1.6 billion for an average raise of $2.3 million, compared to 266 trips to the well for ASX-listed equities to raise some $1.5 billion for an average raise of $5.7 million.
The TSX main board raised $881 million over 75 transactions for an average of $11.7 million; the main board in London raised just $34 million over 10 visits for an average of $3.4; while AIM raised $268 million across 57 deals for an average of $4.7 million.
The figures support qualitative research from elsewhere in the report, namely the chapters on private equity and royalty/streaming firms, where executives reported a lack of participation from public equity and commercial debt in the resources financing landscape. The exception on both fronts being Australia.
However, analysis of the timing of the ASX financings suggests the heat is coming out of the market, with most raisings weighted toward the end of 2017 and only a handful completed in the months leading into the end of October, when the study period finished.
"Overall, the Global Finance Reports paints a fairly bleak picture of support levels for resources companies globally," head of Mining Journal Intelligence Chris Cann said. "Though companies had more luck in Australia, even here the enthusiasm appears to be waning."
The Stock Exchange Comparisons chapter of the GFR also compares the costs of listing and maintaining a listing on the various exchanges; the regulatory requirements; the investment security offered; and other financing metrics such as broker coverage and access to institutional/retail investors.
To download the free excerpt, click here.

Liquidity flooding into METS and junior explorers, setting up a record-beating year

Are graphite shorters in it for the long haul?