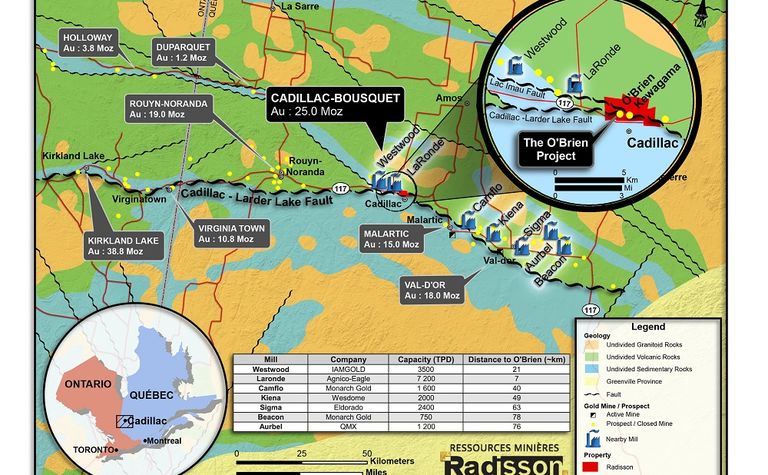 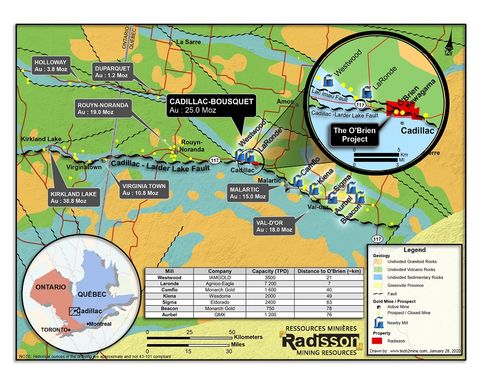 Radisson has arranged a non-brokered private placement of five million class A shares at 20c each, and at least 2.7 million Quebec charity flow-through shares at 36.2c for $1.5 million.

The company plans to use the funds for exploration at its 100%-owned O'Brien gold project, expenses the company will renounce to flow-through shareholders at the end of the current tax year.

"Marshall Precious Metals is delighted to make one of its first investments in an area that I know well from my many years in northern Quebec with Inmet Mining and Agnico-Eagle," said MPM Capital Management CEO, Garofalo.

"Radisson has assembled a very accomplished management team and board and has undertaken an aggressive exploration programme on an impressive land position in one of the most prolific gold districts in the world."

The placement is expected to close on July 9.

Radisson reported results from the ongoing drilling campaign last week, demonstrating strong continuity of high-grade mineralisation in the 36E and F zones to a depth of 950m, and within a mineralised trend similar to that historically mined at O'Brien, according to the company.

The area remained a high priority target, with assays pending for holes that intersected visible gold west of and above a prior intercept of 66.71 grams per tonne over 4.7m, it said.

Recent drilling had also demonstrated potential for a second mineralised trend to the east, largely untested below 400m.

Radisson is only about 35% through its planned 60,000m campaign, with regular updates expected over the summer field season.

O'Brien is in the Bousquet-Cadillac mining camp along the renowned Larder-Lake-Cadillac Break in the Abitibi. The camp has produced more than 21Moz in the past century.

The former O'Brien mine is thought to have been the Abitibi Greenstone Belt's highest-grade gold producer during its production period from 1926-1957, producing 587,121oz at an average grade of 15.25g/t.

Radisson shares (TSXV:RDS) have gained about 85% in the past 12 months to the current 27c, capitalising the company at $50 million (US$3.7 million).