A landmark report has urged both miners and and government to take action to avoid the expected decline of the Australian gold industry over the next four decades. 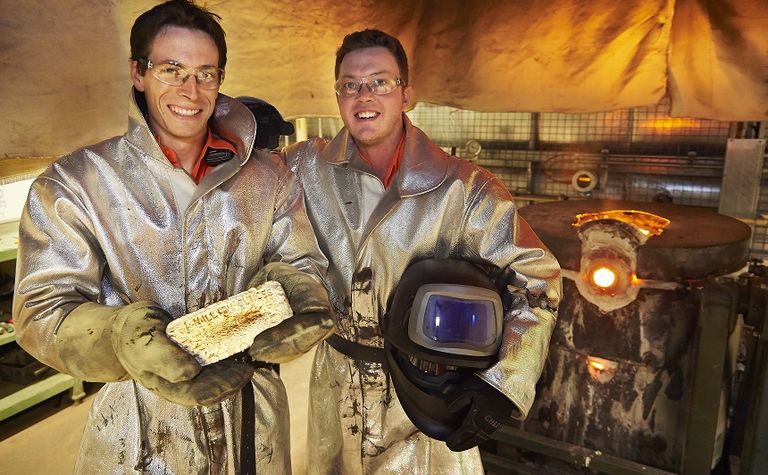 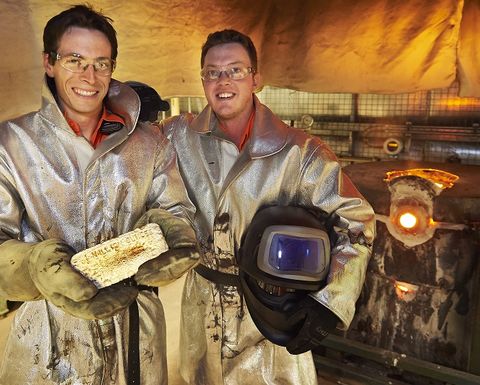 The report by MinEx Consulting managing director and well-respected mineral economist Richard Schodde, and sponsored by 12 government, academic and industry groups, takes a long-term view of the outlook for the gold sector, forecasting the number of mines, production revenue and employment.

According to the study, gold production will peak at 11.3Moz in 2021, before declining steadily.

By 2057, Australian gold production is forecast to be just 4.7Moz - 4.1Moz of which will have to come from deposits not even discovered yet.

That steep decline means that revenues from gold are set to drop by half to A$7.3 billion (US$5.8 billion), while employment could drop by as much as 70%, from 27,980 workers to just 8,300 - though half of the job losses are expected to be due to automation and technology.

Unsurprisingly, production over the next five years is dominated by existing mines, but in 40 years, just four of the current 71 mines are likely to still be operating, producing just 400,000oz of gold per annum between them. 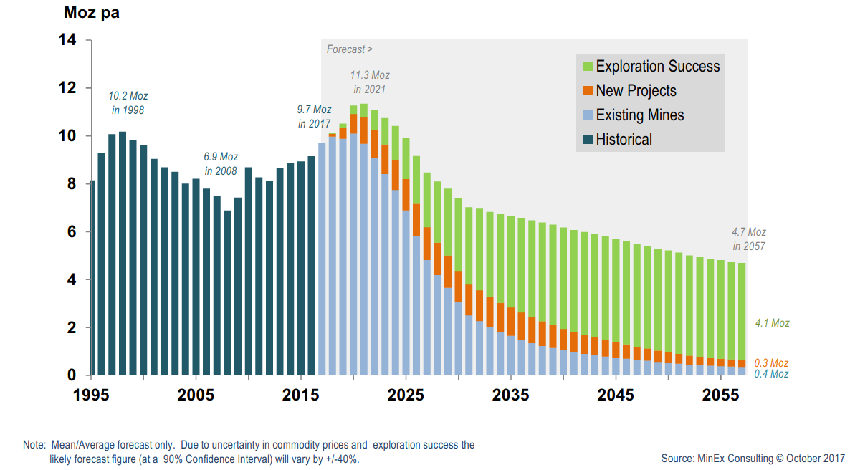 It comes after Gold Fields CEO Nick Holland said on a recent trip to Perth that global gold production had probably peaked.

"It's going to be hard for us to replace the 7Moz or so we mine every year, particularly in Western Australia," he warned.

The MinEx report echoes that assessment, saying production from new mines based on known deposits won't be enough to offset the decline from existing mines.

Therefore, exploration success is critical to overcoming the looming shortfall.

The Australian government's Office of the Chief Economist reported last week that gold exploration rose by 26% to $689 million in the 2017 financial year, supported by higher gold prices.

MinEx has modelled that, over the longer term, around $677 million per annum would be spent on gold exploration in Australia, resulting in the discovery of 266 new deposits over the next 40 years.

It is forecast that half of those will be developed, contributing 4.06Moz of gold in 2057 - or the bulk of production.

In 2032, half of Australia's gold will come from mines yet to be discovered.

That's only 15 years away, and the report warns that the weighted average delay between discovery and development for a new discovery in 13 years.

MinEx called on the government and industry to support exploration today.

"We only have the next couple of years to properly identify and address ways to improve our exploration performance - otherwise Australia runs the real risk of a significant supply disruption in the medium-term," Schodde said in the report.

"Sensitivity studies indicate that each additional dollar spent on exploration generates an extra $11.40 in revenue."

"The incremental benefits of reaching this target will be an extra 4.05Moz of annual production, an extra $6.23 billion in revenues and additional 7,160 jobs."

Schodde said the opportunity existed for industry and government to "invent its own future".

"In addition to developing policies that encourage/stimulate exploration, the opportunity also exists to be more efficient and effective at making discoveries," he said.

"The challenge is that many of these initiatives require effort (and money) and will take several years to bear fruit.

"Given the long lead times involved (both for R&D, discovery and mine development) there is an urgent need to start the process now."

The figures were part of a larger report looking into the long-term outlook for Australia's minerals sector. Reports on iron ore, coal, base metals and uranium will be released in the coming months.

Kristie Batten* is editor of MiningNews.net