Wesdome Gold Mines (TSX: WDO) has found an “uncanny” resemblance between the 844m level development and the 864m level development of the 300E Zone of its Eagle River mine, in Ontario, providing an early indication of the continued strength of mineralisation in this area. 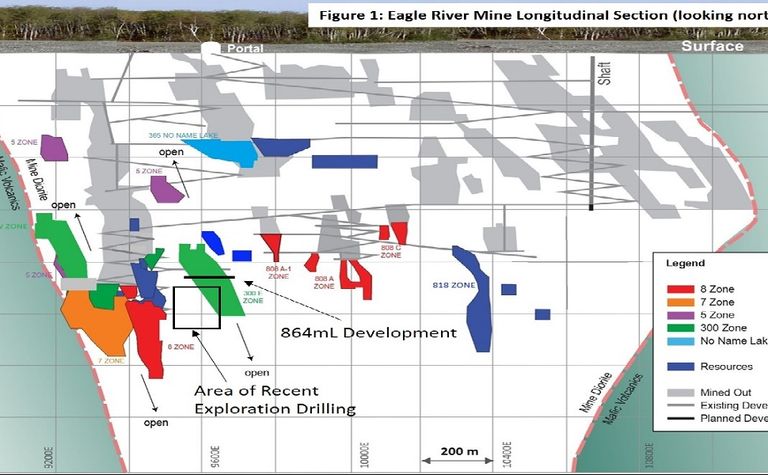 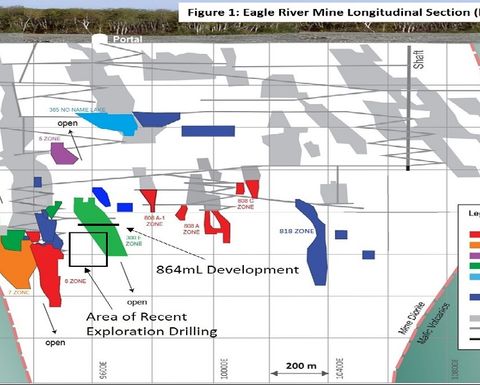 Toronto-based Wesdome, which has a 30-year pedigree as a Canadian gold producer, is working to develop and explore the 300E Zone that was first discovered in 2015. The 300 Zone is located 300m - 400m north of the main 8 Zone structure, which has provided the bulk of the Eagle River mine's production over the past 20 years.

It comprises two areas - the 300W and 300E Zones - with the 300E area consisting of a series of tabular to pipe-like quartz vein systems and strong folding leading to localised widths and grades that are wider as well as higher in grade (303 Lens). To date, diamond drilling has traced the structure from 750m depth to 1,000m depth and it remains open up and down plunge.

To confirm the strong grades and continuity of the 300E Zone, Wesdome last year focused on completing drifting of the 844m level development. Subsequent development on the 864m level within the 300E Zone has continued to confirm the continuity of the strong grades and the geometry of the mineralised zones between drifts and the surrounding drill holes. Lens 303 returned 50.5 grams per tonne gold over an average width of 8.6m, and over a strike length of 20.1m.

The combined strike length of the subzones is 155.4m with a weighted average width of 2.8m, and cut and uncut gold grades of 19.6gpt gold and 28.3gpt gold, respectively, using a cutoff grade of 140gpt gold, the company advises.

"This continued development on the 864mL [metre level] of the 300E Zone demonstrates the good continuity of the gold mineralisation up and down plunge and highlights the tremendous grades and widths in the 303 Lens as a result of local folding. We continue to develop this production area that displays above historic average widths and grades and that this area will continue to be significant production area for the Eagle River mine going forward," president and CEO Duncan Middlemiss said.

He noted production in the second half of 2018 would include higher volumes of ore from this area.

Wesdome believes the mineralisation intersected over 100m away from the known 300E Zone could be another subzone of gold mineralisation and will be subject of ongoing exploration. An exploration drift is being established on the 925m level in order to test this, and other areas, at the Eagle River mine.

In the last month, Wesdome's TSX-quoted equity has gained more than 30%, helping to push its year-to-date performance up 19%. On Monday, the stock added another 4% to C$2.52, bringing the company's market value to C$336.86 million.

Wesdome drew down on its previous facility in July