Premier Gold Mines will immediately drill at least four follow-up rotary holes at an ‘off-trend’ gold find near its proposed Cove underground development in Nevada after reportedly intersecting 4.6m of 12.69 grams per tonne at about 640m vertical depth just west of the north end of the old Cove openpit. 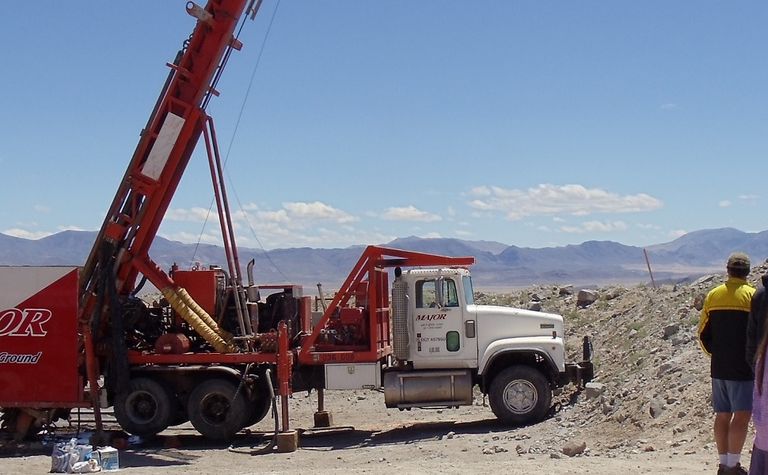 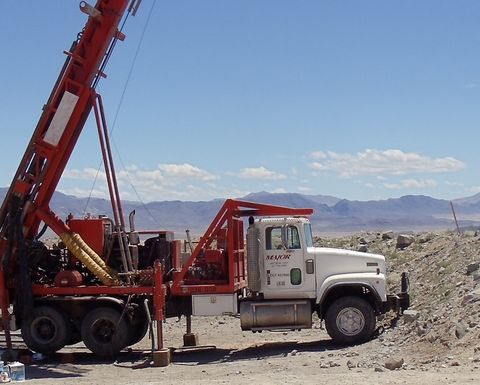 Drilling around the Cove pit in Nevada

The company is spending US$19 million this year on preliminary economic assessment work ahead of a planned 2019 feasibility study on underground mining at Cove. The work includes underground development to provide a platform for more drilling to define the resource at depth, and also hydrology and other lead-up activity.

It is also doing work funded by Barrick Gold under the major's 60% earn-in to ground around Premier's 100%-owned Cove mine area.

A piezometer-hole (HE18-02) drilled to support Premier's hydrology modelling at Cove, and just inside the Barrick earn-in territory, is said to have intersected Carlin-style mineralisation in the middle of the Favret rock unit above a mafic sill. Premier said the "off-trend discovery" was about 125m west of the regional Gold Dome fault and 200m south of the NW Dike, "an intrusion that demarcates the southern margin of the currently known Helen-Gap mineralisation trend" within its McCoy-Cove property.

"Importantly, this discovery occurs in proximity to the carve-out boundary and may trend onto the 100%-held Premier ground," Premier said.

Other reported assays from drilling on the Eureka-Battle Mountain Trend property this week showed evidence of gold and poly-metallic mineralisation - including semi-massive sulphides - east of the old Cove gold-silver openpit, and also Carlin-style gold mineralisation at Windy Point, west of known mineralisation at Helen, in the Barrick earn-in area.

The polymetallic intercept east of the Cove pit returned 2.74m of 5gpt gold, 410gpt silver, 5.7% zinc and 5% lead from about 542m depth in hole PB18-02. Premier said the core indicated semi-massive to massive pyrite-sphalerite-galena mineralisation occurring along the hanging wall of the west-dipping Beacon fault.

"Though this fault was previously unmapped since its surface expression is covered by pediment, early results suggest it could be an important fluid conduit," the company said. "As such, it is similar to the east-dipping Lighthouse fault that is associated with both the shallow poly-metallic mineralisation in the Cove pit and deep poly-metallic mineralisation (2201 Zone) under the pit. 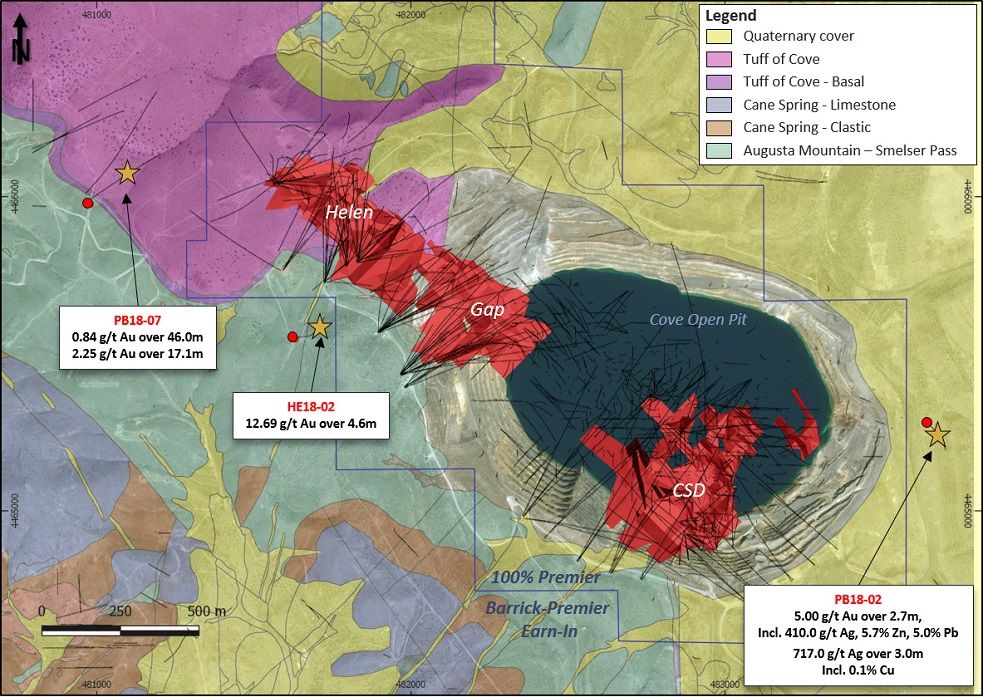 "The mineralisation in PB18-02 occurs 625m east of the 2201 Zone, confirming Premier's belief that the 2201 Zone is underexplored in several directions."

McCoy-Cove lies west of the central part of the Battle Mountain-Eureka Trend and is seen to host four distinct mineralisation types: Carlin-style, polymetallic sheeted veins, carbonate replacement (Manto), and skarn. The McCoy and Cove gold mines have historic recorded production of 3.3 million ounces of gold and 110Moz of silver between 1986 and 2006.

Premier Gold is looking to add production from McCoy-Cove to output from its small South Arturo mine in Nevada. The company also has the Mercedes silver-gold mine in Mexico, and is exploring at Greenstone in Ontario.