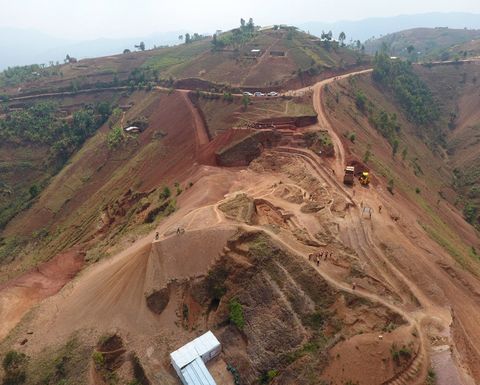 Rainbow's operation is simple, with surface-level mining possible without explosives

The project is spread across several deposits, and the three included in the JORC mineral resource estimate add up to 1.2 million tonnes at 2.8% total rare earth oxides.

Rainbow delivered its first concentrate at the end of last year, with the project's mining technique seeing hills carved away and processed.

Investors were impressed by the numbers, sending the share price up 9% on the previous close to 5.32p (US6.7c), although this came back to 5p in the hour after market open.

Rainbow CEO Martin Eales said the MRE was just the start of defining the mineralisation.

"The mineral resource, which is based on only four out of the 28 identified targets within our licence, shows over 1.2Mt of ore, a considerable deposit in its own right, and provides further evidence that the Gakara deposit is a world-class source of rare earth oxides," he said.

"Three of the areas are high-grade vein stockworks, and include 12,491 tonnes of ore resource at 55% TREO.

"These alone will provide over two years' head feed for our planned ramp-up to 5,000t concentrate, and we will of course continue to explore these deposits further."

Rainbow has struggled with production niggles and told the market in October it would not reach its 400 tonne-per-month production target by the end of the year.