A resource update on the Colomac deposit at Nighthawk Gold’s Indin Lake property in Canada’s Northwest Territories has prompted a more than 30% intra-day drop in its Toronto-quoted equity on Tuesday. 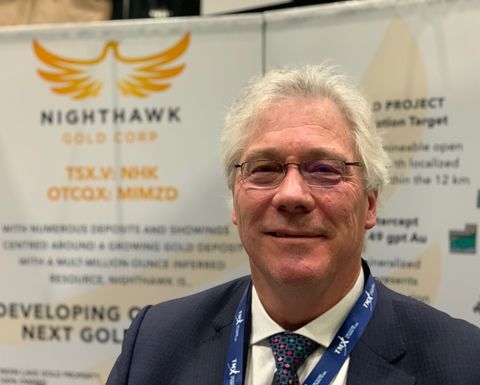 Prepared by InnovExplo of Val-d'Or, Quebec, and based on 924 drill holes totalling 177,598m, the openpit and underground resource total is 25.89 million tonnes grading an average 2.01 grams per tonne gold (up 25% over the prior estimate) for 1.67Moz. Nighthawk has converted 82% of the inferred resource to indicated status, leaving 5.71Mt at 2.03g/t 370,000oz inferred.

Nighthawk has an exploration target for Colomac that suggests another 1-1.5Moz grading 1.8-2g/t can be added by continued drilling targeting projected extensions of the currently defined mineralised zones.

According to the company, the conceptual target illustrates a "clear path" forward for resource expansion near the defined resource area. Outside of this exploration target, there remains a large portion of the host quartz diorite, which represents the mineralised portion of the sill, that remains untested.

Nighthawk CEO Dr Michael Byron said the resource estimate was the most refined and accurate representation of Colomac mineralisation to date. He suggested the recent discovery of a widening of the mineralised portion of the Colomac Main sill, and especially in light of the sill's expansion to upwards of 155m true width at about 750m depth at Zone 1.5, was not captured in the current resource estimate.

"There remains significant upside to build additional ounces, over and above the exploration target within the vastly unexplored portions of the host quartz diorite," he said.

However, Tuesday's selling suggests some shareholders are questioning why management decided to spend money on yet another resource update that did not add materially more ounces.

"Unfortunately, this company has added next to no ounces in the last 2-3 years. Every update on mineral resources is around the same number but ounces just move from inferred to measured," one investor posted on a message board.

Another investor said the grade increase and mineral conversion were positives but also questioned what the update really added to the story.

"Positive development with grade increase and movement of 82% into indicated status, but where are the additional ounces? Why are we spending all this money on drilling? We just recently had to roll back our shares 5-1. How many more times to prove up this deposit? I'm out. May re-enter at a much lower price."

Said yet another investor on Twitter: "What was the point of this [resource estimate] at this stage? Should of (sic) just kept drilling. Almost 2k gold and this gets crushed. Money wasted and should of just went into drilling."