Recent news that Nevada Copper is continuing to ramp up early construction activity at its underground mine, while expanding the mineralization at its large openpit mine, has shone a new spotlight on what is set to be North America’s next copper producer. 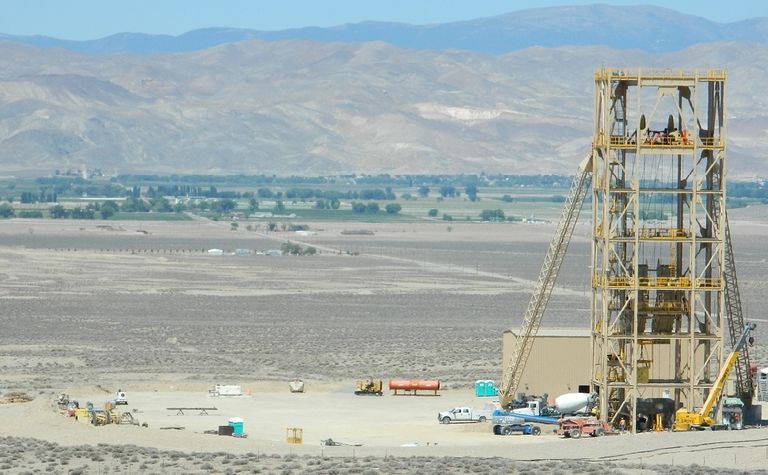 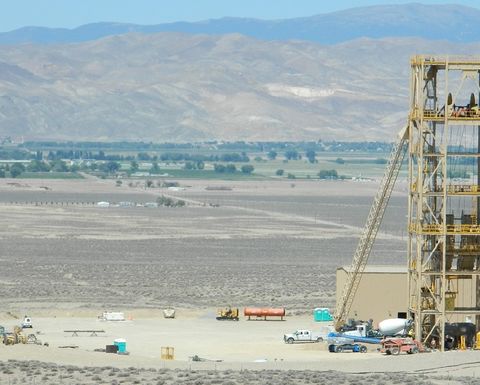 This interest has intensified thanks to the recent and increasing M&A activity in low-risk, near production base metals projects - highlighting the start of a race by the majors to replenish empty project pipelines in response to copper price upside expectations. South32's [$1.3 billion] takeover of Arizona Mining, a company with many parallels to Nevada Copper, is a reminder of the majors' focus on de-risked, North American assets. This follows on from multiple copper M&A deals in recent months, all boasting premiums.

The company's Pumpkin Hollow project site is seeing a flurry of activity as final preparations are being made to extend the 1,900ft shaft a final 237ft to target depth. This coincides with a number of additional project team hires. Long lead equipment was ordered in May and key contractors are in place.

Meanwhile, the 2018 drill program at the openpit is now up to 20 completed holes - all of which have encountered multiple zones of mineralization. The company is also looking at potential new extensions of the ore body to the west. In particular, drilling on the Northern Extension, an area to the north of the open pit deposit recently consolidated by NCU, is showing potential, with apparent new lenses of mineralization being discovered in areas up until now classified as waste. This has potentially positive implications for the economics of the, already-improved, open pit.

To top things off, the company's independent, open pit optimization study is making good progress with the aim of creating a multi-stage approach to open pit development, via a lower-capex, higher-margin Phase 1 Open Pit with optionality over future expansions.

This explosion of activity is good news for the industry and equally good for the company, which recently re-engineered its underground mine for a lower CAPEX, faster path to production and re-tooled its management team with experienced mine builders.

Thanks to a struggling sector, the old Nevada Copper sat still for so long that many lost sight of its standing as a significant copper producer in waiting. There is no waiting now. The copper industry is looking at sustained increases to demand from sectors such as electric vehicles and has a struggling supply base thanks to years of underinvestment by the majors in new sources of copper production. It is also plagued by increasing disruptions from political risk and remote project locations.

So, in a sector that desperately needs stable and reliable supply, Nevada Copper is building a new copper production in the US with the ability to create a fully Integrated domestic value chain (mine to end user). The site is ideally situated on direct rail lines to US copper smelters that are already in need of additional concentrate feed, 45 minutes away from Tesla Gigafactory, close to the Amazon US logistics hub and close to Reno.

The rejuvenated company and its Pumpkin Hollow mines are moving rapidly towards production and significant cash flow - faster than all of its peers - and that has the new Nevada Copper very much in the investment community spotlight on what is increasingly being shown to be a hollowed global copper development pipeline. 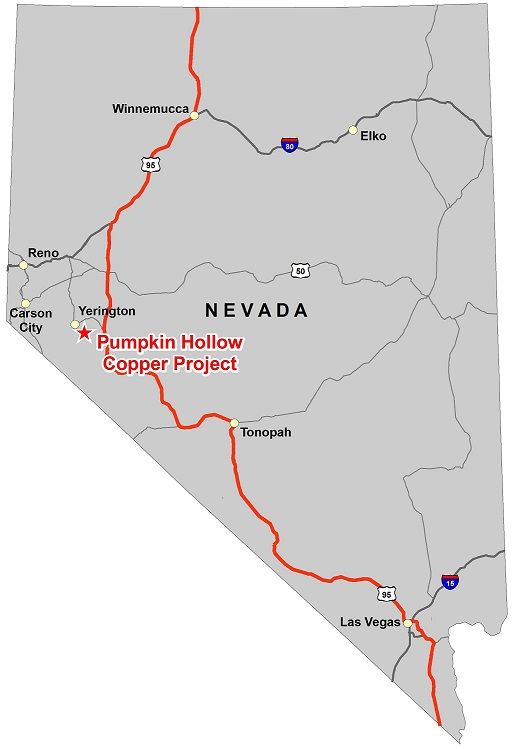 To maintain an optimal balance between speed, capital expenditure and further growth options, NCU has focused on phased capital expansions. This allows the company to control optionality to pursue multiple staged expansions, which can be funded without additional equity dilution, and brought on line with short lead times. This strategy is unusual in the mining industry, focusing on generating returns for shareholders while maintaining the ability to respond to a potentially rapidly rising copper price environment.

Some high-profile names driving the new project and strategic development focus at Nevada Copper have no doubt been a factor in the growing investor focus on the company, in addition to the company's position as the only permitted copper project in North America.

But it is also clear that Nevada Copper's plum cornerstone asset is now being fundamentally reassessed as a corporate value driver.

The re-engineered underground project blueprint removes the previous plus-US$1 billion capex roadblock that had stymied progress. It also leverages US$220 million of sunk investment in mine infrastructure, and drives maximum value from a staged production build-up. The open pit project is receiving similar treatment to lower construction costs, increase margins and reduce construction time.  This approach is central to the ambitions of a company re-casting itself as a profitable mid-tier producer, a potential sector consolidator and, before long perhaps, as a serious explorer in a sector that has generally been devoid of them.

Non-executive chairman Stephen Gill says the calibre of the project managers and company builders now overseeing delivery of Pumpkin Hollow, and recalibrating NCU's corporate ambitions, "puts us in a different place to many other companies, certainly in the North American copper space". 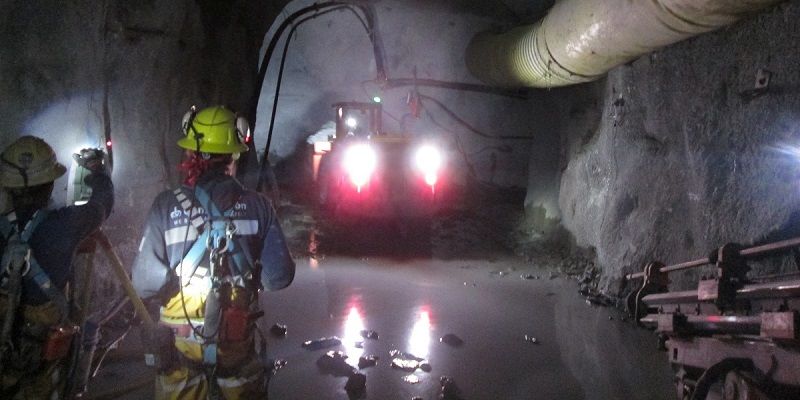 "You won't find another junior mining company with the market cap of this company [currently circa US$308 million] with this depth of management and board expertise," Gill says.

"A disciplined approach focused on execution and capital efficient development of under-appreciated assets seems to be resonating." 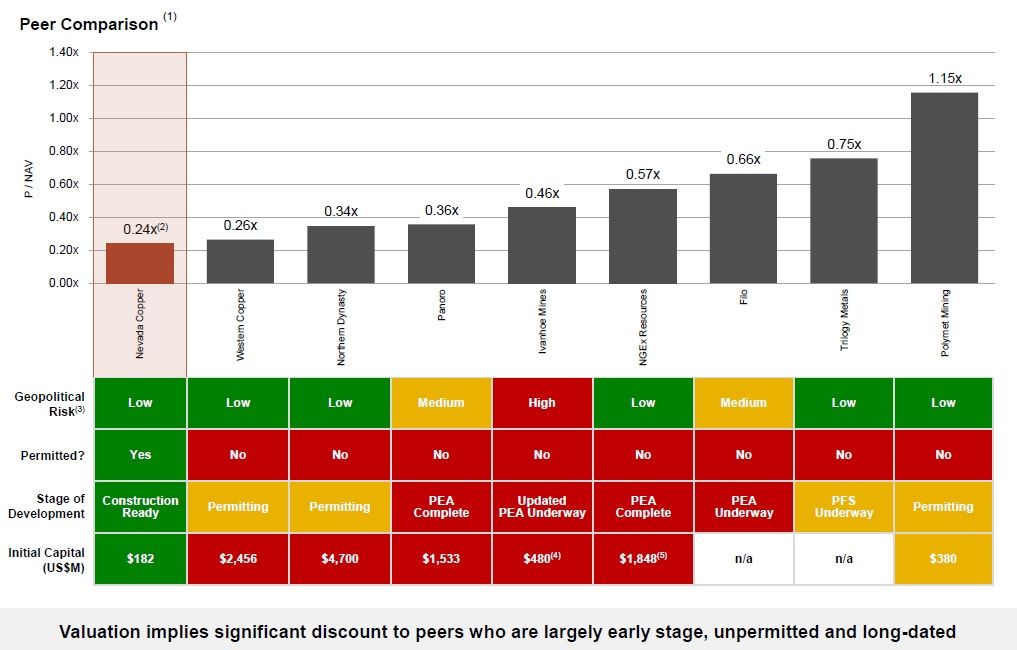 The need for speed

A recent analyst tour of the Pumpkin Hollow property drove home the speed of activity that is set to continue NCU's transformation over the next 12 months.

Gill says the underground contractor is mobilised and work is underway to complete the main production shaft. The surface head frame and hoist unit are already in place. Underground decline development to extend the 644ft of lateral tunnelling in place will open up positions for drilling on inferred resource zones that could significantly extend current mine reserves.

Pumpkin Hollow has measured and indicated resources of 23.9 million tonnes grading an average 1.74% copper-equivalent, supporting an initial 13.5-year life for the 5,000t/day underground mine. Planned output of 60 million pounds of copper, 9,000oz gold and 173,000oz silver over the first five years gives an average copper-equivalent grade of 2.01%.

Around the planned mining zones, though, is a similar volume of inferred material that could soon be drilled more economically.

That includes extensive inferred resource between the East and E2 underground deposits, which extends back towards the surface at Pumpkin Hollow, and which will also be accessible via the lateral decline under construction.

"We think the underground mine life can be extended rapidly," Gill says.

"That would create opportunities to examine expanded production, as well, without additional capital because the underground infrastructure is in place and you always have scope to de-bottleneck a new plant."

NCU has remained committed to a mantra of ‘margin-over-tonnes' and focused execution on sequential expansions. Gill explains that the strategy has been to pursue multiple high-IRR development stages, allowing the company to focus its efforts on execution and to choose its own path to development timeline and financing without the need for large amounts of equity dilution.

Supporting this strategy, NCU has had three drill rigs turning for several months now on ground that hosts resources, and extensions, targeted to support a 30,000-40,000t/day surface operation.

Core drilling on Pumpkin Hollow's North Pit - which has 40% higher average grades than the South Pit that underpinned earlier mine studies - aims to expand the deposit and convert previously untested areas, historically classified as waste, to ore. Results from the first two holes in an ongoing programme included intersections of multiple zones of copper mineralisation in the previously undrilled Northern Extension Zone of the North Pit, headlined by 42.7m of 2.05% copper.

NCU says the mineralisation is wider and higher grade than adjacent North Pit holes, and extends mineralisation into areas that were previously classified as waste in the technical report due to little-or-no drilling.

Drilling on the North Pit is also closing up drill lines on current inferred resources, which is expected to feed revised indicated resource estimates in the next few months.

The open pit project optimisation reconfigures existing feasibility level work with a focus on value rather than size, and indicates the attractiveness of a staged development approach. The approach would look to focus initially on the higher-grade North Pit, creating a smaller plant that could be expanded incrementally thereafter, which could halve the former $1 billion-plus surface project cost.

NCU projections have a phase-one open pit development adding significantly to Pumpkin Hollow's net present value, and returns, with the fully funded underground project generating US$75 million a year or more of free cash that will add to the company's capacity to fund the next expansion stage. That FCF, and the project value, is only going to be enhanced by the Trump administration's lower corporate tax rates.

The strategy is to reduce the CAPEX that can be spent in phases that we can fund without the need for large equity issuances.

"It's possible to see a sequence of development that potentially gets you to 100,000tpa, or 220Mlb a year of copper from underground and open pit, funded all the way through from internally generated cashflows and sensible leverage," says Gill.

"When it comes to our daily processing rate for the ore,  we're permitted up to 70,000tpd, so we already have the flexibility to do interesting things there."

And that may extend to regional and other opportunities.

Gill says Pumpkin Hollow is sitting in a 100-square-mile area he describes as "highly under-explored", that hosts a 33-billion-pound copper endowment, in the region around the NCU property.

"We're the only ones permitted in the district and we're building significant production infrastructure now. So Nevada Copper has first mover advantage and is looking to capitalize on that by building the infrastructure that could help support the entire district.

"The other part of that regional picture is the scale and intensity of the skarn mineralisation that we have on our property.

"So geologically there's some real grassroots work to do to see what feeds all of this very strong and high-grade skarn mineralisation.

"The exploration focus at Pumpkin Hollow historically was limited by the old land position and just focused on the main deposits. You see historic workings dating back maybe 100 years in the same stratigraphy as the Pumpkin Hollow underground mine orebody, that have never been followed up.

With the speed and intensity of activity underway at Pumpkin Hollow, Nevada Copper's team is clearly excited about their front-running position to become the next copper producer and the potential to leverage this lead to grow into the next mid-tier copper player. 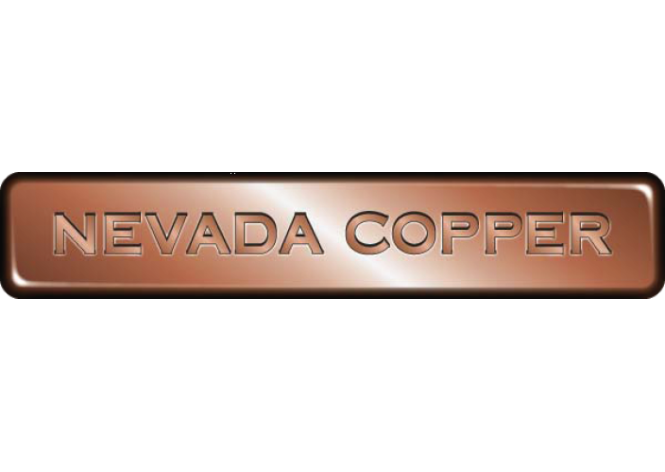