A rising force in the 'Ring of Fire'

Asiamet Resources, the Melbourne-based, AIM-listed metals developer and explorer with properties in Indonesia, resembles – metaphorically – a crouching tiger about to hit the market with a keenly-awaited bankable feasibility study on its most advanced project, Beruang Kanan Main (BKM), a copper deposit in Kalimantan, Borneo. 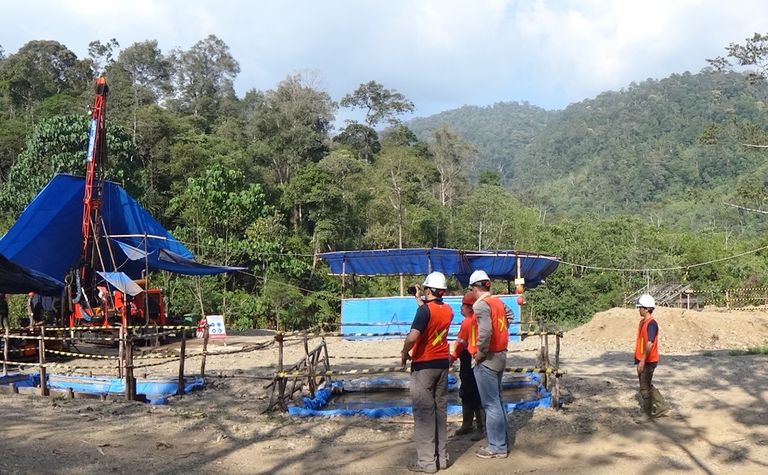 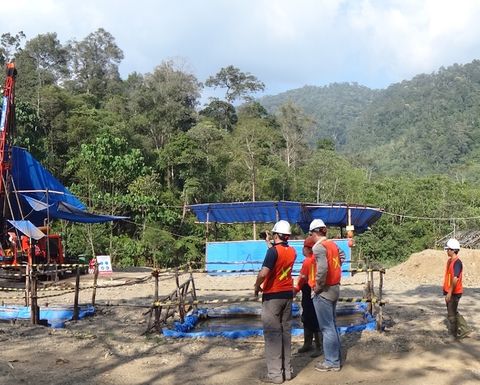 Tony Manini, executive chairman of the company, where JP Morgan has built a near 8.4% stake, said the BFS should outline "the attractive economics" of the proposed operation, providing a springboard for a management offensive to obtain funding for an openpit mine producing 25,000 tonnes of copper cathode over eight years.

Production from near-surface resources would be via a heap leach and solvent extraction electro-winning facility with first production slated for 2020. A 2016 preliminary economic assessment estimated an after-tax internal rate of return of 39% and after-tax NPV of US$204 million.

Less advanced, but much-trumpeted, is another property, this time on the island of Sumatra called Beutong, part of a much larger porphyry copper-gold system with JORC-compliant resources of 2.4 million tonnes of contained copper, 2.1 million ounces of gold and 20.6Moz of silver. One recent intersection from a current drilling programme returned 456m at 1.05% copper-equivalent (0.93% Cu and 0.15gt/Au).

Manini said: "We've got a very large land package with an extremely prospective set of rocks at Kalimantan (BKM is part of its wider KSK project on the island). Then you add in Beutong which is potentially six times bigger."

"You won't see a package like that in the hands of a junior company anywhere in the world. I reckon we've got tenements which typically you could float three companies off the back of," said Manini, a veteran dealmaker and former executive at Newmont and Rio Tinto.

Manini know his onions when it comes to mining in Indonesia. He's been involved in the country's metals sector for more than 20 years. Just this month, he was part of a deal involving EMR, a private equity firm (where he's on the board), which offloaded a gold mine (Martabe) to an Indonesian group for a whopping US$1.2billion.

Asiamet's assets are in the mineral rich Indonesian archipelago which hosts mega-porphyry style deposits in the Ring of Fire. The company's broker, Liberum Capital, says Asiamet's resources came in at an average grade of 0.62% Cu (eq.). Deposits all outcrop at surface.

Across Asiamet's Indonesian properties there is significant upside potential for further resource growth. BKM was said to be merely the first prospect with defined resources within a large, approximately 15sq.km area, of anomalous copper mineralisation in rocks and soils. Zinc, and to a lesser extent lead, formed broad anomalous geochemical halos around the main zone, adding to the overall appeal.

At Beutong, at 600m-700m depth, there is a notable transition to chalcopyrite-bornite mineralisation, similar to the deeper sections of other porphyry systems in Southeast Asia such as the giant high-grade Grasberg mine and the massive Wafi-Golpu gold complex (Newcrest) in Papua New Guinea.

Liberum said the company was emerging as a budding mid-tier copper and base metal producer, and "its globally significant resource base is sharply undervalued versus its peers".

"If you look at a global peer group of 16 copper exploration companies, only five have larger attributable contained copper resources, and only one had a copper-equivalent resource base that was both larger and higher grade - SolGold's Alpala in Ecuador - a planned underground block cave. On an enterprise value/resource basis Asiamet traded at a significant discount to its peer group average - "unjustified in our view given its near-term development potential at BKM, exploration upside across its asset suite and its fully licensed status at the large-scale Beutong deposit".

"We have very good grades coming through the surface," he says. "It's at the side of a bitumen road, it's got nearby power and water, not far from a port, all the sort of infrastructure you need. Big copper deposits, well-located like Beutong and Kalimantan, are rare these days. Our planned operations will cost half of what you'd pay in more difficult terrain such as found in the Andes or Mongolia."

The infrastructure proximity was better at Beutong than BKM with the latter 500km from the coast, compared with 60-70km from Beutong. But there is still a good road at BKM, water for barges - to be used for part of the journey to the ocean - and new power plants being built not too far from the nerve centre of Asiamet's operations on Kalimantan. 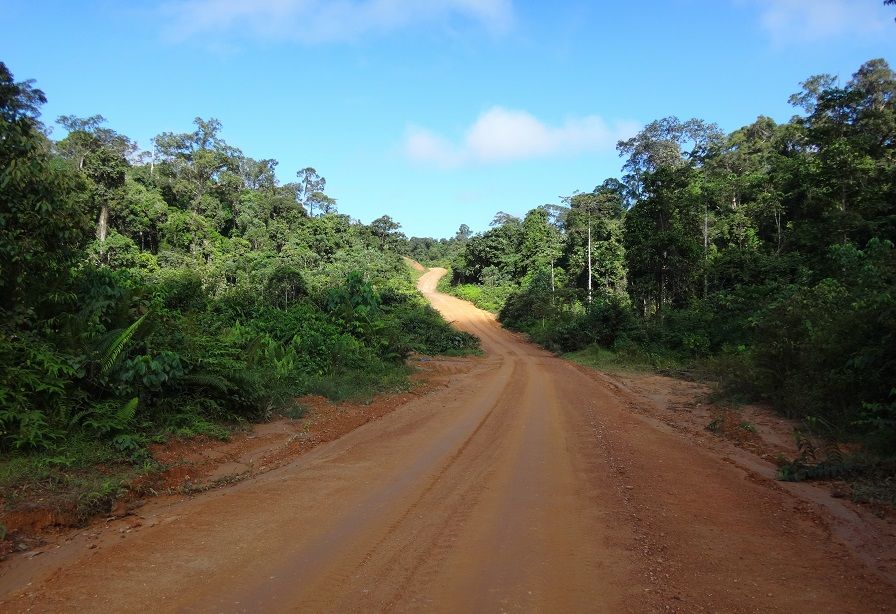 The road into Beruang Kanan Main (BKM) in Kalimantan

Peter Bird, the company's CEO, said it would take about five days to transport copper cathode from BKM to the nearest port.  But he saw BKM as a "starter project, a catalyst, if you like, because in that contract of work area, there is a whole suite of other things that need to be followed up".

As far as Beutong was concerned, there was more work to be done. "We have drilled that resource down about 500m vertical from surface where it outcrops. But it's not unusual for a system like that to have a thousand to 1,500 metres of vertical mineralisation," said Bird.

Manini dismissed worries about Indonesian resource nationalism. "I'm very familiar with the operating environment in the archipelago. When you've been working there as long as I have, you get to know people, you build long-term relationships, you have credibility because you have stuck it out in the good times, as well as the bad."

Under the BKM ‘contract of the terms of work', Asiamet would need to divest 51% of the equity in year 10 of production, but it was easy to dispose of assets at fair value in Indonesia, said Bird. "We have quite a lot of runway at BKM as the current life of mine is eight years."

Divestment would be on a commercial basis, with an independent valuation, even then if the numbers weren't acceptable, the case would go to third-party arbitration. "I think it's a reasonably fair process. If someone's prepared to pay fair value, we are happy to sell," said Bird.

The escalating trade dispute between the US and China is a cloud on the horizon for all base metals miners with the copper price off about $1,000 per tonne since the turn of the year. But the fundamentals were extremely strong.

Manini said: "Half the world's population is urbanising. That's just  unprecedented, it's unstoppable. Yes, it might slow down a little but we are getting growth that we have not seen in the world previously.

"Couple it together with copper supply challenges - it's very difficult to find new supply. Trade wars are impacting us in the short term, yes, but ultimately, we are in situ for the many long, strong years of commodity demand and shortage of supply."

Bird said the global copper market was at 22Mt and growing at about 2% to 2.5% a year, "so you have to find something like 400,000t of new production just to sustain demand … that's not allowing for things like electric vehicles and all that stuff".

Very little has been spent on exploration globally recently, and copper was no exception. "And don't forget a copper mine takes about 20 years to bring into production," Bird said.

"Basically, people keep consuming this stuff; you can't not have it. People are anxious to get access to copper feedstock, people probably look at their order books over the next 18-to-36 months and think crumbs, where are we going to get this stuff?"

Both Manini and Bird reckon most of what they'll produce will stay in the massive, developing Indonesian market rather than be exported to other Asian countries such as China.

Manini said: "Indonesia is predicted to be a top-five global economy by 2035, it's modernising and growing quickly with a lot of new infrastructure. Domestic demand-growth outlook is strong, our market is on our doorstep.

"It's a good time to be in the business."

Wyloo shrugs off due diligence issues to confirm Noront bid