Saturn Metals is busting perceptions of Apollo Hill as a large-tonnage, low-grade gold project with the recent discovery of multiple zones of high-grade gold, including 10m grading 5.78 grams per tonne. 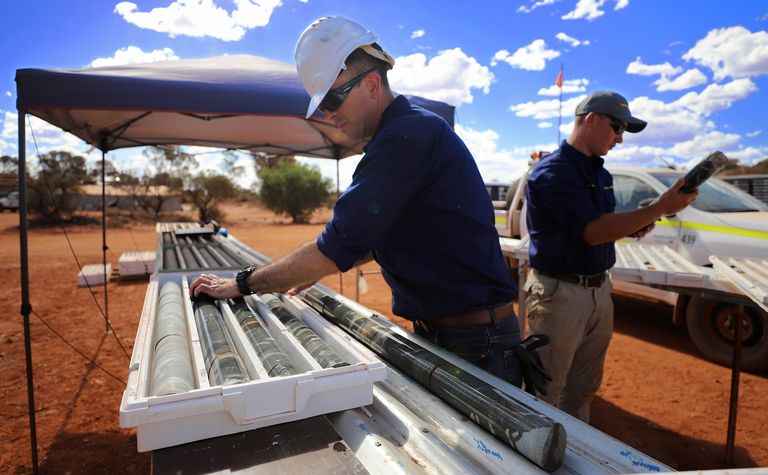 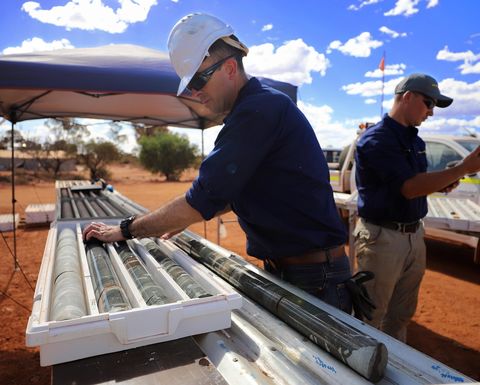 The discovery of high-grade gold could be the biggest twist so far in the long-running story of Apollo Hill, which has sat for 33 years in the centre of WA's eastern goldfields but has never been properly explored.

Located 50km southeast of Leonora, Apollo Hill has had a succession of owners and joint venture partners, including Homestake, Battle Mountain, Teck and Apex, since its discovery by Fimiston in 1986.

Historical drilling suggested the deposit was barely 1g/t, but the large size of the gold system made the project alluring for heavyweights such as Homestake and Battle Mountain.

Reinforcing the appeal of Apollo Hill is its location on the Keith-Kilkenny Lineament, a crustal-scale structure that is a proven conduit for large gold deposits. The structure runs from Saracen's Carosue Dam deposit in the south, through Apollo Hill and then onwards to St Barbara's Gwalia mine and Saracen's Thunderbox deposit in the north.

Apollo Hill became the flagship asset of Peel Mining shortly after its IPO in 2007, but spectacular base metal hits on Peel's tenements in the Cobar district in NSW shifted the focus away from the eastern goldfields. A decade after the float, Peel decided to spin off Apollo Hill and 1,000 square kilometres of contiguous tenements into Saturn Metals, which listed via a $7 million IPO in March 2018.

The central pitch to investors in the IPO was the potential to improve on Peel's JORC resource figure of 17.2 million tonnes at 0.9 g/t for 515,000 ounces of contained gold, all at depths of less than 180m.

Six months after listing, Saturn delivered a 36% increase in the gold resource to 685,000oz, based on a highly effective program of 9,400m of RC drilling.

The new resource figure included some encouraging signs of improvement in grade, reflecting a strategy to target some small but high-grade shoots that had begun to emerge in historic drilling. The overall resource now averages 1g/t, and Saturn had also been able to report a maiden indicated resource of 3.3Mt at 1.1g/t.

The prospectus had pointed out high-grade gold as a possible sweetener at Apollo Hill, although it is fair to say few investors had high expectations, given three decades of thinking about Apollo Hill as a large tonnage, low grade project.

But in April, Saturn's share price took off with the release of assays from drilling in a newly defined high-grade zone in the hanging wall just 150m east of the Apollo Hill resource. The best result was a shallow, 10m intercept grading 5.78g/t, including a core of 5m at 11g/t. This has been followed by other shallow, high-grade hits in the hanging wall, including 13m at 5.05 g/t, with a core of 4m at 9.8g/t.

At the same time, new drill results from the Apollo Hill resource area also began looking much better than average. Intercepts included 15m at 2g/t within an envelope of 30m at 1.23g/t. 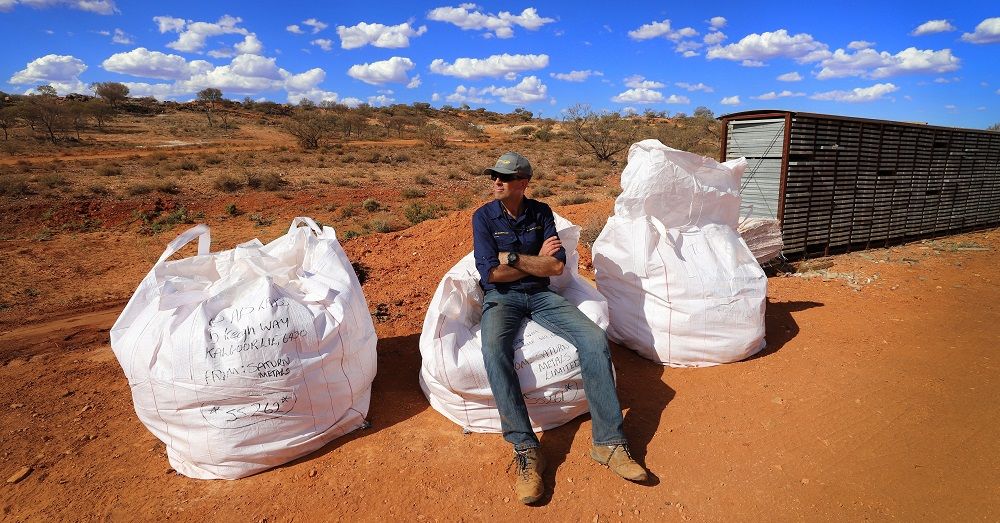 Ian Bamborough: "The success of that modelling has created a step-change in the grade of the intersections we are reporting"

"The success of that modelling has created a step-change in the grade of the intersections we are reporting this year compared to 2018. And it has meant a step-change too in our thinking about the potential of Apollo Hill," Bamborough said.

In May, Saturn capitalised on its surging share price to top up its cash reserves to $4.3 million with a $1.5 million placement at 21c a share, a slight premium to its IPO issue price just over a year earlier.

The cash is being used to accelerate drilling activity, with two rigs starting on site in early June to make rapid work of a planned RC program of 10,000m, on top of about 8,000m already drilled in 2019. The high-grade zone on a number of splays in the hanging wall is the key target, but there is also further in-fill drilling in the current resource envelope.

Investors will not need to wait long to see the effect of the burst of drilling activity, with another new resource estimate to be published as soon as possible in the second half of 2019.

The large size of the Apollo Hill gold system means there is still so much potential beyond the zones targeted by the current drill program. The JORC resource extends north-south over a distance of 1,200m and is just 40-80m wide, but drilling has already defined the Apollo Hill system over 1.7km of strike and at widths of up to 150m. 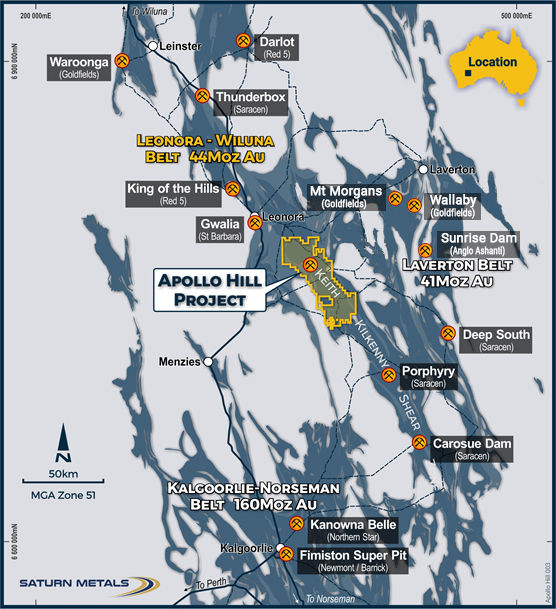 Depth is another vector with the potential to add tonnage and grade in the longer term. The current resource is defined at depths of less than 180m, but Apollo Hill is open at depth, where some of the best historical drill hits were achieved.

The other big news for Saturn in 2019 to date is the success of an ore-sorting trial based on new X-ray mineral scanning technology. Ore sorting has the potential to turbocharge the improvements in grade being achieved with the drill bit. The high-grade gold at Apollo Hill is commonly hosted in quartz veins within basalt, which makes it highly suited to ore-sorting technology. In May, a trial achieved a 150% increase in the grade of a sample from 0.78g/t to 1.2g/t, with gold recoveries of 91.9% after only two passes through the sorter.

Bamborough said the ore-sorting results, which were achieved without any refinements, could create a number of options. "You could reduce the tonnes fed through a mill, meaning a smaller mill and lower capex at better grade. The ore sorting result is very exciting for us, and we are continuing to evaluate the possibilities across the deposit."

This comes on top of excellent metallurgy of Apollo Hill ore, being free milling, low cyanidation and coarse-grind gold. Gravity separation alone yields a recovery of more than 60%.

In the background, Saturn is also making progress with exploration of regional targets within its large tenement package. A program of first-pass aircore drilling early in 2019 found a 400m-wide zone of anomalous gold at Bob's Bore, 3.5km east of Apollo Hill. Bob's Bore straddles the Keith-Kilkenny shear zone and is just 500m south of historic drill intercepts, including 9m grading 10.9g/t gold. Given the potential for another big gold system like Apollo Hill, Bamborough is keen follow up with broad, step-out drilling that could define a new mineralised corridor, rather than a program designed at prospect-scale.

"When we put the results out in the March quarterly we got a good response to it. I think people can see the bigger potential because of Thunderbox, to some extent Gwalia, which is off a second order splay on the Keith-Kilkenney shear, Saracen's Karari and a more recent discovery by Breaker Resources way down in the south. It's a huge fertile corridor and we are sat in the middle of it where there has been a lack of exploration," Bamborough said.

Decent slab of funding flows in from instos