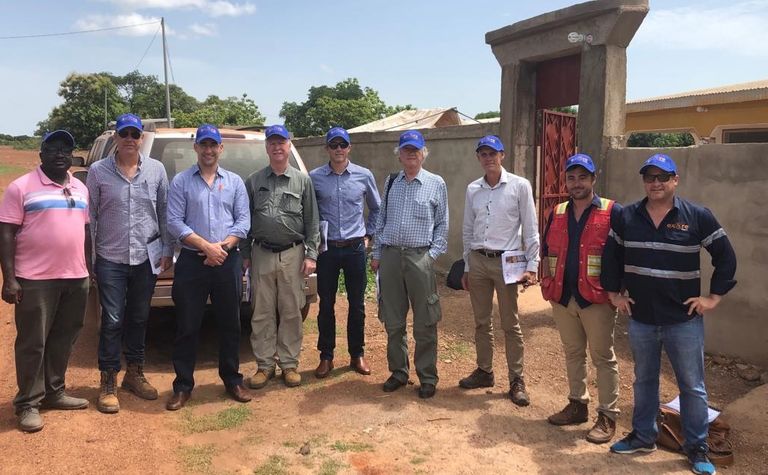 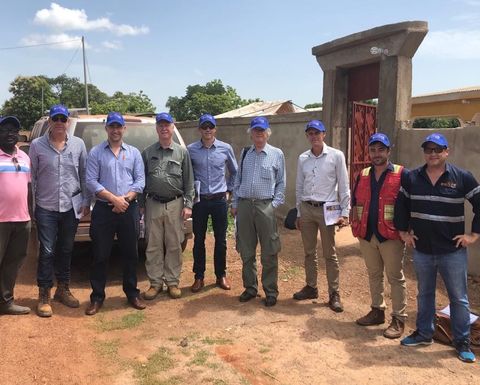 The stellar intercepts at its Veronique and Antoinette discoveries have helped enable Exore to expand its landholdings in the prospective country and garner support in a recent A$10 million raising to fund further exploration.

Exore's next round of drilling has just begun, as it moves to establish a maiden resource at Veronique and Antoinette, which lie 12km apart at its majority-owned Bagoe project in the country's north.

Exore is a relative newcomer to the country but didn't waste any time, launching an aggressive exploration programme this year of about 80,000m of drilling which resulted in the two discoveries.

The company has described the discovery as having a similar structural setting and proximal to the Tongon gold mine.

"Veronique is a very large area, we've got gold in soils over about 8km by 2km but we've only tested the central 1.5km of the anomaly corridor," Tremain said.

"Wherever we've drilled under high-grade gold in soils we've got very good results at depth which bodes well for the rest of the 8km anomaly."

"Any ounces we define across both prospects really form part of one project," Tremain pointed out.

"Our ultimate goal is to drill a resource that justifies standalone project development, which we think would need to be in the order of 2-3 million ounces.

"We'd hope by this time next year we'd demonstrated we're well on the way to achieving that."

To the south of Bagoe, limited work has defined a 20km gold-in-soil anomaly at the Exore's 80%-held Liberty project. 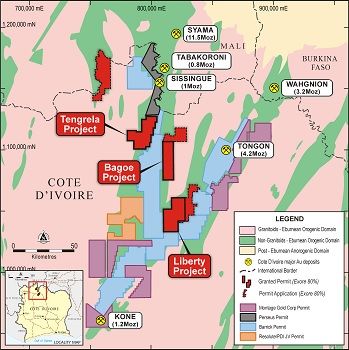 An overview of Exore's projects and geology in Côte d'Ivoire

The Liberty 2 prospect is in the centre of this 20km-long trend and shallow drilling has yielded results including 13m at 2.57g/t from 4m.

Liberty 2 has also shown excellent gold recoveries of 92.7%-89.4% from its oxide, transitional and fresh mineralisation in baseline cyanide leach testwork.

Exore has nearly trebled its tenure in the country to almost 2,000sq.km this year as it cements its focus on Côte d'Ivoire.

It owns 80% of the Bagoe and Liberty exploration permits, with ASX-listed Apollo Consolidated holding the remaining 20%, and has the right to earn up to 90% of the Tengrela project to the west.

It has complemented this combined 1,027sq.km area with three exploration applications totalling 921sq.km.

Tremain said there were several factors in the company's favour which had helped it expand its holdings, at relatively low cost, from the initial 700sq.km.

"Firstly, it's because we're well-funded - it's pretty unique for an exploration company to have $15-$16 million in the bank," he said.

"We've been active as a joint venture partner because we're well-funded.

"And we've shown we fulfil our exploration promises and therefore we're an attractive partner for existing landholders in the area."

The outstanding drilling results have also garnered investor attention, demonstrated by the heavily oversubscribed commitments for the $10 million placement at 8.5c per share to be finalised this quarter.

"Our drilling results over last nine to 12 months have been exceptional and attracted a lot of interest from investors across the retail and institutional markets," Tremain said.

The results have also piqued the interest of other West African gold players but Tremain emphasised the company was not seeking a corporate partner.

"We're definitely seeing quite a lot of interest from other corporates who have operating mines in West Africa, who are quite interested in what we're doing," he said.

"But really, our target is to find a standalone project and be able to move forward on our own, without a partner."

Within a fortnight, Exore will have a diamond rig, an RC rig and two auger rigs drilling at its key targets for about the next six months.

The company also had regional exploration work planned, including geophysics and geochemistry over its entire, circa 2,000sq.km tenement package.

"No doubt there'll be targets generated from that, that we'll be looking to target with drilling in the next six to 12 months as well," Tremain said.

Given the pace of the past 12 months, Tremain is expecting a busy year ahead.

He believes Cote d'Ivoire has enormous geological potential, being the least-explored district within the prolific Birimian greenstone belt.

He acknowledged security issues did sometimes weigh on sentiment towards companies with assets in West Africa but said Cote d'Ivoire was a good country to operate in, with outstanding infrastructure, political stability and an attractive mining code.

"We've only been in the country for about 12 months but we've been very pleased with what we've seen in terms of our dealings with the government, with our permits renewed and applications granted," he said.

"And over the last 10 years there have been five or six mines permitted and developed, which demonstrates the government is behind the exploration and mining sector in Côte d'Ivoire."

Investors have sent the company's share price up 60% over the past year and Exore is aiming for a further rerating as it achieves its next milestone.

Tremain said drilling to date was demonstrating the potential at Exore's now substantial holdings in the country's north and he anticipated a strong news flow courtesy of the drill bit as the company aimed to establish a maiden gold resource at Bagoe.

"We're looking forward to an exciting 12 months ahead," he said.

Tanga has taste for Cote d'Ivoire