The gold sector’s track record of delivering new mines on time and under budget in West Africa in recent years has been second to no other region worldwide and Cardinal Resources’ Namdini project in northern Ghana is now lined up to join the sequence after a standout feasibility study underlined its potential to become a “globally significant”, US$390 million mine that could generate more than US$2 billion of free cashflow over 15 years at current gold prices. 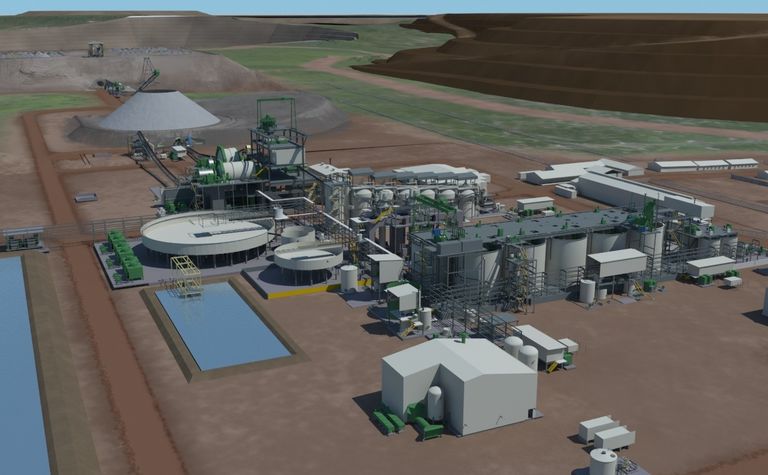 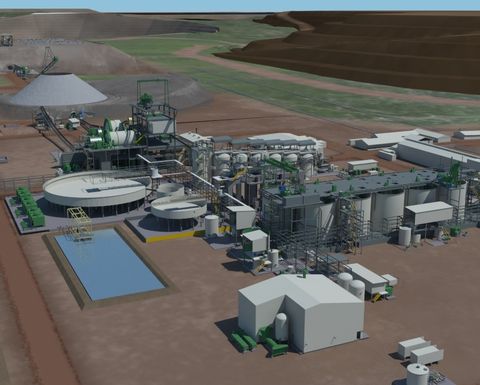 "Cardinal's 7Moz Namdini gold resource is the largest gold discovery in the Birimian Gold Province in West Africa this century," Martin Place Securities says in an initiation report on the company and project.

"The current gold price in excess of US$1,400/oz provides a supportive background for mine construction and the higher grade [1.41gpt] starter pit of about [1Moz] over [27 months] would provide project capital payback in less than [21 months with] cash costs below $600/oz."

Martin Place head of research Barry Dawes suggests lead Cardinal shareholder, gold major Gold Fields' A$350 million funding for 50% of the new 300,000ozpa Gruyere mine in Western Australia is a "possible template" for Namdini, though "Gold Fields has yet to indicate its intentions", and Cardinal has a range of options for financing the proposed project "that should have minimised dilutionary impact on shareholder equity".

Gruyere co-owner and discoverer, Gold Road Resources is now a A$1 billion company.

Archie Koimtsidis, managing director and chief executive officer of Cardinal, says maximising shareholder value from the company's 2016 discovery and rapid progression of Namdini into arguably West Africa's most significant new gold mine is the main focus now. The company is sitting on circa-A$27 million in the bank to continue to advance the project, so will prudently assess all its options and continue working with London-based debt advisor Cutfield Freeman & Co to sort through the best debt finance terms.

It has started front end engineering design work and will refine the project execution plan, while early site works and engineering activity underway will further de-risk Namdini and move it towards construction.

"In early 2019, the company commenced project finance discussions with a number of Australian and international banking groups from which the company received a number of preliminary (non‐binding) financing term sheets," Cardinal said in its feasibility study statement.

"Discussions with these interested financial institutions have progressed where financial and technical due diligence has commenced, with a data room prepared and accessed, with several technical site visits already conducted.

"In addition to traditional financing solutions, the company is concurrently evaluating strategic alternatives to bring the project into production with a view to maximising economic outcomes for Cardinal shareholders." 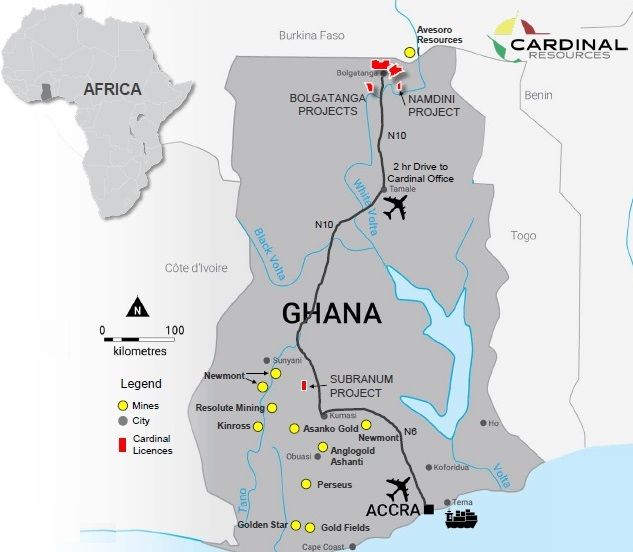 Dawes points out Burkina Faso gold developer West African Resources recently had debt offers of 115% of the capex for its new 200,000ozpa mine.

"With over 1Moz slated for production in the first three years - 421,000oz in year one alone - and an average annual gold production of 287,000oz over a 15‐year mine life, Namdini ranks among the world's largest known, financially robust, undeveloped gold projects"

"Ghana has a long-term history of gold mining with numerous mines so financing risk is known and well documented," he says.

Namdini's start-up capex could be paid back in as little as a year at a US$1,500/oz gold price - 21 months at $1,350/oz - driven by early higher grades and recoveries, a low strip ratio and low operating costs for the proposed starter pit outlined in the feasibility study.

Confirming the robust economics laid down in a 2018 prefeasibility study, Cardinal's October 2019 feasibility study lifts the Namdini proved/probable ore reserve to 5.1Moz from the earlier 4.76Moz total and brings the basic project capex down to US$348 million (with an additional $42 million contingency) compared with $414 million previously.

Cardinal is projecting a 421,000oz first full year of production, and 1.1Moz in the first three years, at AISC of US$585/oz. Life-of-mine AISC is now at US$895/oz, over 15 years, with adoption of proven Aachen oxidation technology from Germany in a conventional, 9.5 million tonnes per annum crush, grind, float, regrind and CIL process flowsheet expected to deliver operating cost savings and 85% gold recoveries in the first three years (LoM recoveries pegged at 83%). 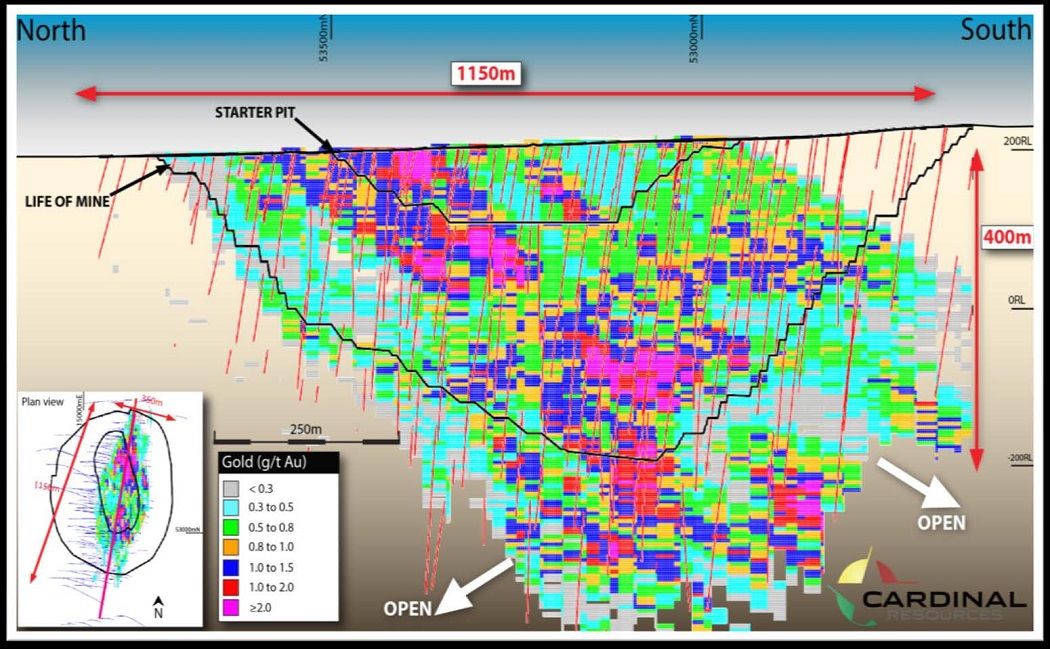 "The starter pit at current gold prices could generate more than US$300 million pa and repay the total capital … well within two years," says MPS' Dawes, who says on its latest resource number, Namdini has been a textbook project development from its discovery so far and "outstanding by any measure".

"Discovery to 7Moz resource was less than three years and to PFS was under just five," he says.

Cardinal is targeting the second half of 2022 for a maiden gold pour at Namdini, subject to the financing outcome.

"With over 1Moz slated for production in the first three years - 421,000oz in year one alone - and an average annual gold production of 287,000oz over a 15‐year mine life, Namdini ranks among the world's largest known, financially robust, undeveloped gold projects.

"Namdini has a 5.1Moz ore reserve that is projected to generate US$1.46 billion in undiscounted, pre‐tax free cashflow over 15 years, including US$324 million in undiscounted, pre‐tax free cashflow during its first year of full production, based on a gold price of US$1,350, which is significantly below the current spot gold price.

"Since the discovery of Namdini in 2015, we have continued to be focused on de‐risking the project and have reached a robust project capex accuracy level of plus-15-to-minus‐5% for this feasibility study. Unlike whole of ore gold processing plants, we have the benefit of being able to produce a concentrate for gold extraction on site which means that we have a much smaller back half of the plant providing a huge positive impact on capital costs. Economic and technical optimisation confirms a large, single openpit utilising a conventional process plant with a throughput of 9.5Mtpa and a very attractive 24‐month debt payback.

"On a social level, Namdini is poised to become the first large-scale operating mine in the Upper East Region of Ghana, delivering sustainable prosperity and opportunities to all stakeholders.

"We are grateful for the continued overwhelming support of these communities and their elders along with the Government of Ghana to bring this project into production."

Cardinal at a key juncture

All eyes on what Gold Fields may do