One year on from its formation, Horizon Minerals has poured first gold and is eyeing greater potential in Western Australia’s Goldfields as it gets its largest-ever drilling programme underway. 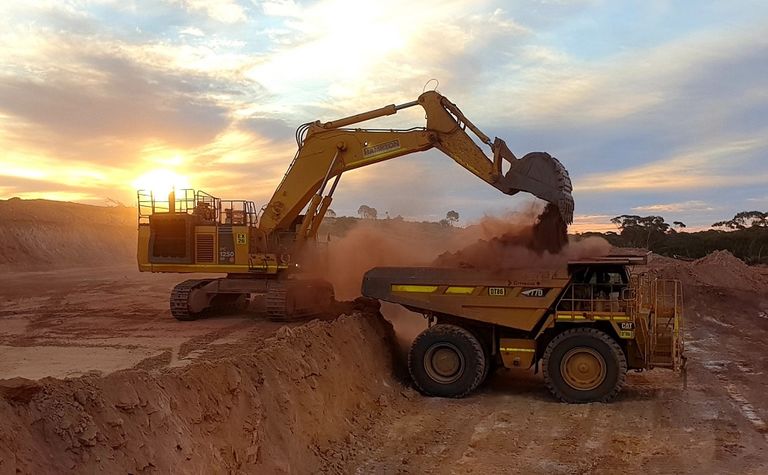 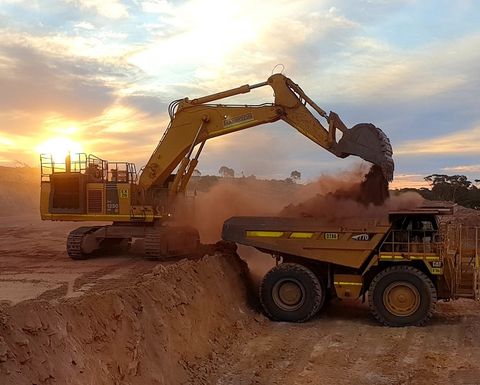 The producer, developer and explorer, spawned from the merger of Intermin Resources and MacPhersons Resources, has consolidated more than 850sq.km of tenure, all within a 75km radius of Kalgoorlie-Boulder, and with 1.1 million ounces in mineral resources - of which more than 74% is in the measured and indicated category.

Its flagship project, Boorara, generated almost A$3 million in revenue from its first gold pour in July.

Leveraging off the high Australian dollar gold price, the trial mining production is helping de-risk a planned, larger-scale development centred on the project, with a feasibility study due next year.

The monthly milling campaigns, scheduled through to January 2021 to treat 159,000t of ore grading 1.86g/t gold for 8,700oz, are expected to generate about $7 million cash at current gold prices. 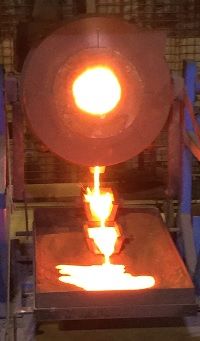 "The consensus view on the gold price is very strong and this enables a lot more gold to be profitably mined from historic areas," he said.

"In addition, new technology enabling assessment and testing of hidden deposits under cover or under salt-lake country like our Lakewood prospect can open up new unexplored areas of the Goldfields.

"So I see a lot more gold coming from the region for many decades to come, and particularly underground operations will increase given the gold price and new technology to exploit these deposits.

"It is a world-class gold producing region and everyone is clambering to get in on the action and why wouldn't you?"

A case in point in terms of the Goldfields' continuing potential is at Horizon's Rose Hill project at Coolgardie, gained in a 2019 asset swap with producer Northern Star Resources.

Rose Hill is expected to add higher-grade feed to Boorara, thanks to its 95,000oz resource grading 2.49g/t, and recently-recovered historical data has pointed to higher-grade potential including 4m at 11.07g/t from 8m.

Drilling in the first half by Horizon has returned results including 3.4m at 17.92g/t gold from 78.7m, and Price said the project continued to demonstrate significant openpit and underground potential.

In addition to local knowledge, Price pointed out Horizon had a strong technical team, with extensive experience in exploration, mine development and operations.

A feasibility study is due in June 2021, targeting an initial four to five-year mine plan underpinning the construction of a standalone processing facility at Boorara.

The company's 1.1Moz resource is currently almost equally split between Boorara and at key satellite deposits and Horizon is looking build on this through its plus-70,000m drilling programme which kicked off this month.

"There are three facets to the program," Price explained.

"Firstly, reserve conversion to deliver an initial five-year mine plan underpinning the mill build, and secondly, resource growth to increase the production profile and build near mine resources.

Horizon is fully funded for its drilling programme, plus the completion of the consolidated feasibility study and to continue to pursue further regional consolidation opportunities.

In addition to the Boorara revenue, the company has received overwhelming support for a $16.1 million raising priced at 14c per share.

"The sentiment in gold is at all-time highs and institutional and retail investors are looking down the curve for growth opportunities," Price said. 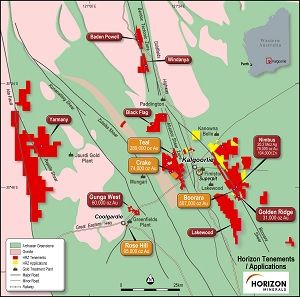 Horizon Minerals' projects in the Goldfields

"As a producer, developer and explorer, we would like to think we tick a lot of boxes to potential investors who support our growth strategy," he said.

"The scale and quality of institutions joining the register was overwhelming and demonstrates we are on the right track.

"Our tenure surrounds the Super Pit in Kal and the majors are our neighbours, so there is also potential corporate activity whether we are predator or prey.

"Either is fine as long as shareholders get a good return on their investment; that is why we are here."

"With the gold price being so strong, price expectations are increasing so we will continue to pursue value accretive acquisitions at the right price - but we also believe we have significant organic growth potential on our existing tenure and we want to do that justice as well," he said.

"Recently granted new discovery tenure will be a large portion of the exploration budget and we are very excited about the targets that have been generated in the last 12 months from a detailed technical target generation study."

Price said Horizon held many attributes to set it apart from other junior gold producers, including its Teal success and Boorara's location, just 15 minutes' drive from Kalgoorlie and close to all required infrastructure and services in a safe jurisdiction, with staff able to go home to their families each night. 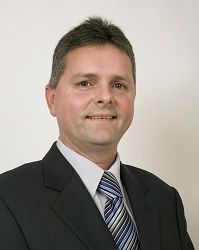 "Shareholders also have exposure and retained interest in our non-gold commodities through quality JV partners who are focussed on the vanadium project in Queensland, copper projects in the Murchison and now there is considerable interest in our Nimbus silver-zinc project given the rising commodity prices," he said.

Twelve months in, Price sees another busy and productive year ahead for Horizon, as he anticipates drilling results, resource updates, maiden reserves and production updates.

"In a year's time, we aim to have our feasibility study completed, be making a development and construction decision at Boorara and growing the business into a respected, emerging mid-tier gold business for our shareholders," he said.