In the race to build Australia’s next standout mid-tier gold miner, Ramelius Resources is now well and truly into its stride. 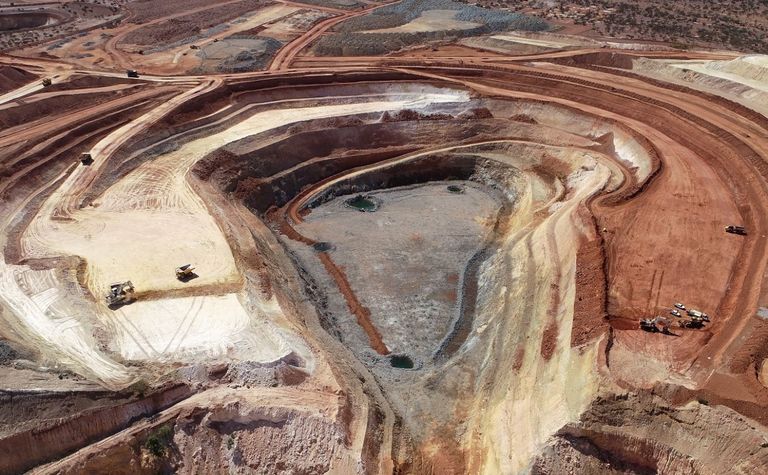 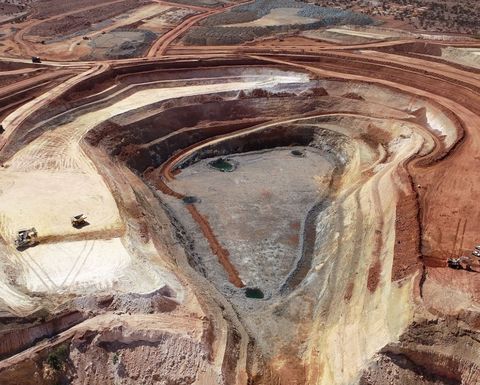 The one-time minnow that became a market favourite more than a decade ago on the back of short-term success at the rich Wattle Dam gold mine near Kambalda has become a mature ASX 200 sector leader with a market value approaching A$2 billion and long-term mine plans underpinning low-cost annual production of circa-250,000oz for the next five years and beyond.

While prudent acquisitions and investment in exploration and production growth over the past five years has built output circa-20% yoy in that period, disciplined cost management has shaped the current margin and profit outlook, giving Ramelius a run at future value development that is the envy of its peer group.

Managing director Mark Zeptner has been at the helm since mid-2014 after starting with Ramelius back in 2012 as chief operating officer when the company was still transitioning out of its Wattle Dam glory days and into a future that revolved around the 100-year-old Mount Magnet gold field in the state's Murchison area. The period was a tough one for the global mining industry and some of the world's biggest gold producers were trying to reset after mismanaging the sector's previous price surge and capital market trust. Major Barrick Gold started its Australia retreat and Northern Star and Evolution became gold stars on the rise on the back of discarded Barrick and Newmont Mining assets.

Ramelius has made what became a second-string Evolution asset, Edna May in the Westonia-Southern Cross district, into a cornerstone production centre in its 250,000-300,000ozpa, two-hub platform, with the injection of satellite mines, Tampia and Marda, to underpin a five-year mining plan.

Trucking ore long distances (by the industry's historical standards) into central mills, taking advantage of roadtrain advances and WA's excellent road infrastructure, has become a Ramelius strong-suit and the rich Penny project picked up in its A$171 million, scrip-based Spectrum Metals acquisition, is set to turbocharge the company's Mt Magnet returns over the next few years.

That M&A script has been extremely productive for Ramelius over the past five years or so and it is expected to stick to it as it potentially adds a third hub to elevate its production and market rating. 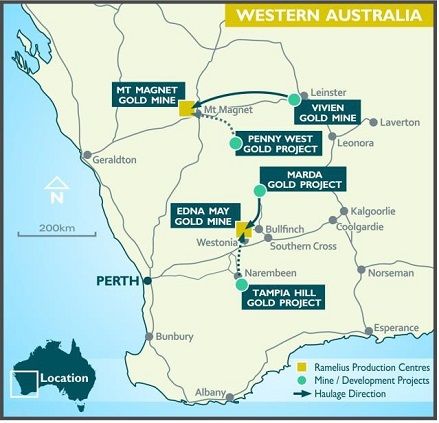 Ramelius' M&A focus is, at this stage, very much on its home track.

"We've shown we can operate very well in our backyard," Zeptner says.

"We're obviously not the only player here; it's pretty competitive. We paid a lot more for the ounces at Penny West than we paid for Vivien, but the gold price was more than $1,000/oz higher, and it's more than twice the size and half the distance from Mt Magnet, so the value case is a bit different."

Zeptner is also a big believer in the latent discovery potential around and under existing mines and processing infrastructure in the state, which new technology and geological thinking is helping to unlock. With Ramelius' expanded, A$25-30 million FY21 exploration budget, he's hoping to see more of the discovery success that has helped build out the company's resource and reserve inventories over the past few years. He also thinks, at a statewide level, an uptick in exploration spending is likely to continue to throw up Spectrum-type acquisition opportunities.

"We're very excited by the project. It's one of the highest-grade undeveloped gold mines in Australia"

"You've got to make your own luck … whether it's finding your own [projects or resources], or acquiring junior explorers which is what we've done, because the majors aren't dropping assets as they were," Zeptner says.

"People are dusting off old projects. Magnet is a classic example. It was an old WMC asset. There were better assets, and there were worse ones, but the reality is it's been going for 100 years and produced 6Moz and counting, and we're still finding new orebodies 3km from the mill … and they're not necessarily at 1km-plus depth either.

"We've looked at all the obvious suspects, and in most cases we get our DD right … to say, that's not for us because of this and this. People will swear to you until they're blue in the face that you're missing a good opportunity and then six or 12 months down the track what you think was going to happen does happen and you go, that's why we didn't like that for whatever reason.

"For us it's got to be an upgrade on our portfolio, or at the very least be as good as what we have, otherwise the perception of downgrading just to grow is there and you do not want that. 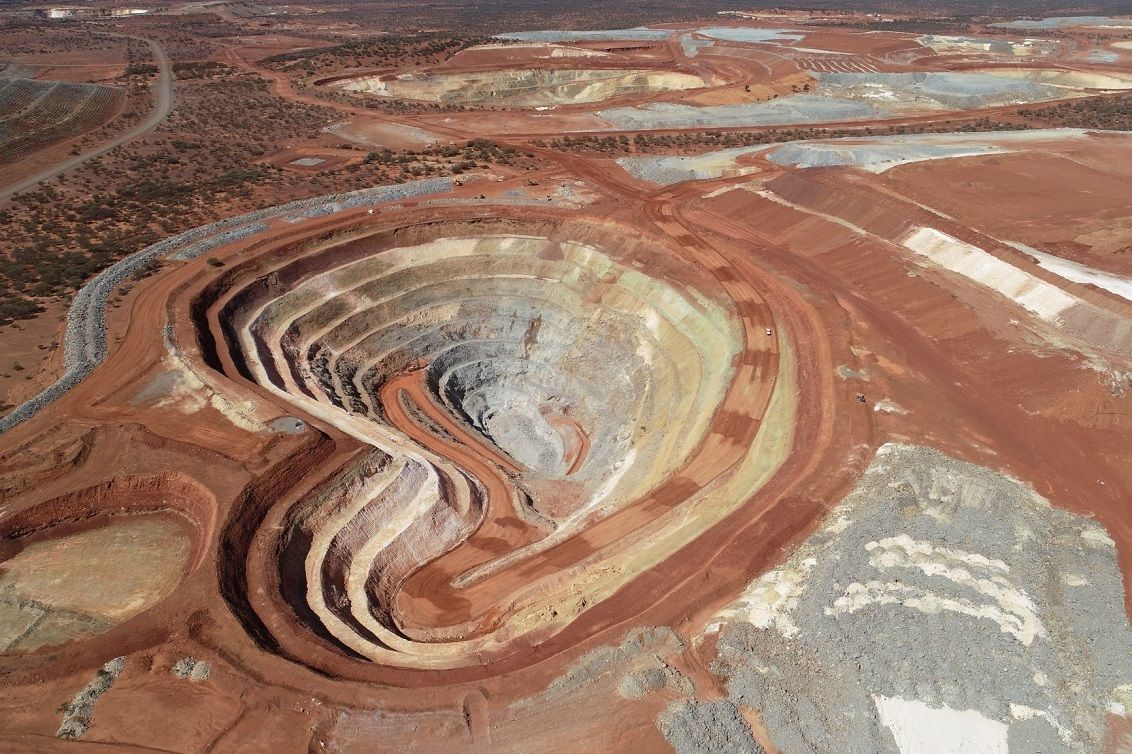 The Stellar pit at Mt Magnet in WA's Murchison

"You want to follow the Evolution model of upgrading your portfolio, and the feed to your mills.

"For us, that probably means [the next material acquisition] needs to be 100,000ozpa, but it needs to be plus-five years and the cost needs to be similar to ours. There is no point buying a third hub that's got 2-3 years because that's shorter life than what we currently have."

Ramelius has 4-5Mtpa of milling capacity at its two production centres and recently presented a new mine plan out to FY28 outlining total production of 1.45Moz primarily across six years at average AISC of A$1,200/oz over the first five years.

The company's expanded exploration spend will continue to be focused on its big landholdings around its operating hubs, where it has had considerable success replacing and expanding reserves, and out to 100km and beyond from its plants.

"We started off with Mt Magnet with an eight-year life - I started when they were commissioning the mill - and here we are eight years later and we're still talking about a plus-five-year life," Zeptner says.

"So it's a classic replacement story in terms of Aussie gold, and exploration success if you're persistent at it."

The company is seeking to build on Penny resources of 620,000 grading 15gpt for 300,000oz (including 420,000t at 20gpt for 270,000oz at Penny North) and after earlier resource confirmation and infill drilling new exploration drilling is underway. An ore reserve of 500,000t at 14gpt (230,000oz) underpins a final feasibility study on open pit and underground ore sources expected to come into the Mt Magnet production schedule in FY22.

"We're very excited by the project. It's one of the highest-grade undeveloped gold mines in Australia," Zeptner says.

"You've only got operations like Fosterville producing at a higher grade.

"There are not that many double-digit grade gold mines in Australia.

"So we think it justifies the price we've paid and we're very confident that we will get a strong return just on what we've reported in the public arena, and that's before we find any additional ounces.

"We put no exploration upside into our model, we just based it on what we can see at this point in time. We're confident there is excellent exploration upside, not only down-dip on the current known deposit but also along strike between Penny West, which is the main asset, and some of the new prospects up to the north."