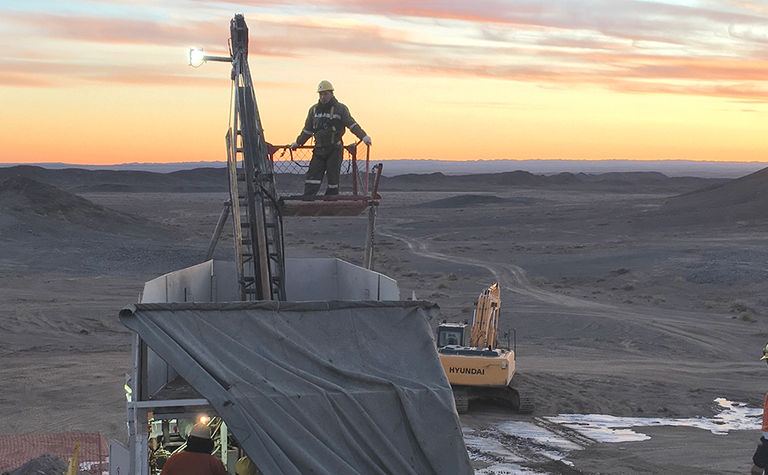 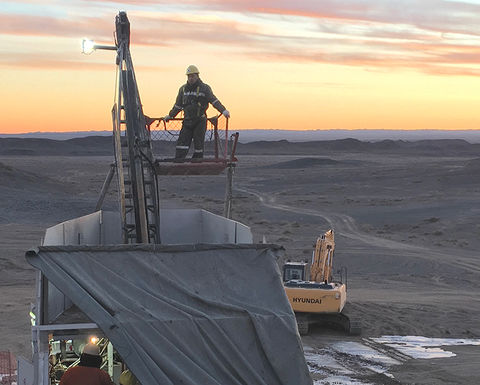 Peter Akerley, a founder of Erdene Resource Development Corp., first became aware of Mongolia's mineral riches in the mid-1990s as exploration manager for one of the largest western financed programmes in the country. As a geologist, with 35-years of experience, he describes himself as being "awed" by the country's geological potential ('Erdene' is the Mongolian word for treasure, or jewel).

Akerley led a group of explorers and financiers to establish Erdene as a private entity focussed on Mongolia gold and copper exploration in 2001. The Nova Scotia-based company listed on the TSX-V in 2004 and graduated to the main board of the TSX in 2005. In 2018, Erdene cross-listed on the Mongolian Stock Exchange, where it remains the only firm listed on both exchanges.

Following a country-wide evaluation during the company's initial years, Erdene acquired Gallant Minerals from Mohamed Al Fayed (the well-known former owner of Harrods in London), which held the Zuun Mod copper-molybdenum prospect in 2005, bringing the company to the Khundii Gold District. From 2007 to 2011, Erdene explored and defined Zuun Mod as one of Asia's largest undeveloped molybdenum-copper porphyry deposits. Recent price increases in molybdenum and copper have elevated the value and interest in this project, but the company is now largely focussed on the gold district it has discovered, 35km to the west. 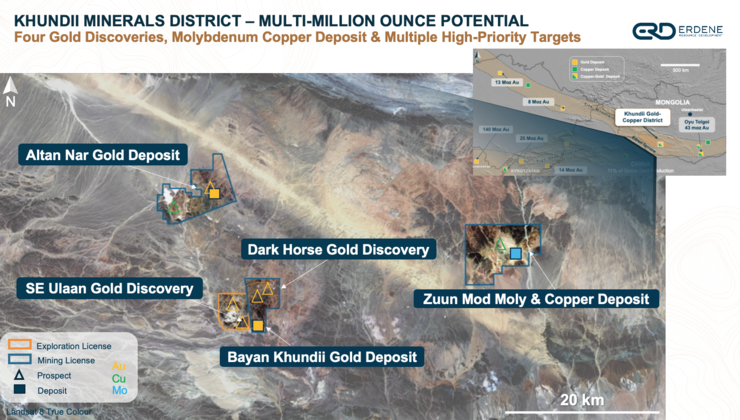 Following the porphyry discovery at Zuun Mod, in 2008 Erdene turned its focus to the Late Paleozoic Island Arcs in southwest Mongolia. Of particular appeal has been the Late Carboniferous mineralisation in the Edren Terrane (310-335ma; now known as the Trans Altai Terrane). Erdene was the first company to undertake methodical exploration of the highly prospective portion of the Central Asia Orogenic Belt (CAOB), which is host to some of the world's largest gold and copper-gold deposits, anchored by the Muruntau deposit in the west and Oyu Tolgoi in the east.

Erdene's regional exploration produced the largest geological database of the Mongolian portion of the CAOB, and led to the identification of the Altan Nar polymetallic deposit in 2011 and the Bayan Khundii deposit in 2015. Together, these deposits, and a multitude of other prospects, form the 170km2 Khundii District related to shallow subduction Paleozoic intrusive events within a 40km by 20km area.

Erdene has the strong backing of Canadian billionaire Eric Sprott, who became the company's largest shareholder (with 11%) in August 2020 following a C$15 million investment (recently increased to 14% through market purchases). Shortly after the 2020 financing, the European Bank for Reconstruction and Development, one of the largest foreign direct investors in the country, with over €2 billion deployed in Mongolia to date, gained a significant interest, and currently holds a 10% equity interest following a loan conversion. Recent financing has included an over-subscribed offering in Mongolia to raise US$5 million, and the execution of a mandate letter by Export Development Canada for a US$55 million senior debt facility that is expected to be the cornerstone of project finance for Bayan Khundii.

Erdene received a Mongolian Tax Stabilisation Certificate for Bayan Khundii in December 2021. Additionally, the company has received many of the permits to commence construction of the project.

Erdene expects to reach a total gold resource of over 2 Moz in the Khundii District by the end of 2022. The company's attentions are centred on the exciting Bayan Khundii project (meaning 'rich valley'; see below). In addition to Bayan Khundii and the deposit at Altan Nar (meaning 'golden sun'), located approximately 16km north, Erdene is investigating multiple other prospects, including following up on the 2021 discoveries at Dark Horse Mane and Ulaan. The first phase of the 2022 programme will include 10,000m of diamond and 3,000m of rotary air blast drilling. 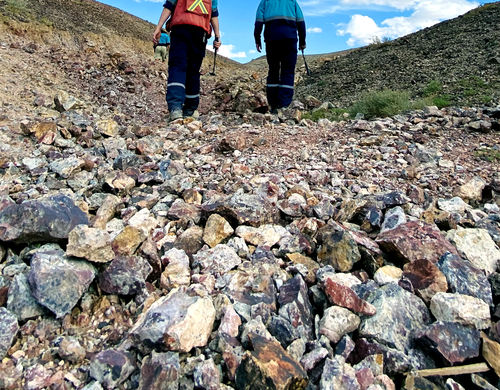 The company's gold resource (NI43-101) already amounts to 1.1Moz, and in addition to expanding its existing prospects, Akerley is confident of further grass roots discoveries. Erdene, he says, is focussed on building a portfolio of gold prospects with multi-million-ounce potential.  Akerley notes "The reason we came to Mongolia in the first place is that potential for giant-sized, tier-one deposits, and this is what is beginning to unfold in the Khundii district".

Akerley, who has held the position of President and CEO since March 2003, describes last season's exploration as "a tremendous success". He notes that, in 2021, "very high grade, near surface, oxide gold mineralisation was discovered at Dark Horse, and exceptionally thick intervals of gold mineralisation enveloping high-grade zones were intersected at the Ulaan Southeast discovery." These prospects are all part of the same intrusive related mineralising event as at Bayan Khundii.

A bankable feasibility study on this prospect in mid-2020 outlined an open-pit operation to extract around 63,500 oz/y from high-grade ore (of greater than 3 g/t Au) with a six-year mine life). Higher grade material at Dark Horse, 2.4km north, as well as mineralisation intersected at the Ulaan Southeast, are being evaluated for the potential to enable production to reach 80,000 oz/y utilising the mill's excess capacity (with minor modifications).

In the 2020 feasibility study, ore reserves are given as 1.2Mt of proven material (grading 4.2 g/t) and 2.2Mt of probable material (3.5 g/t), containing a total of 409,000oz (grading an average of 3.7 g/t). The operation has an expected all-in sustaining cost of US$733/oz. The feasibility study suggested a capital expenditure of US$59 million, giving an internal rate of return of 42%, payback within two years and net present value (at 5% discount rate) of US$100 million (using US$1,400/oz gold). The free cash from gold production at Bayan Khundii (an annual US$40 million in the feasibility study) would be employed to support anti-dilutive exploration of the district. A Detailed Environmental Impact Assessment has already been approved by the Ministry of Environment and Tourism, and a local co-operation agreement signed with the provincial government. Design work is completed, and long lead-time equipment such as the comminution circuit has been ordered.

Although the "stage is set" for a construction decision and some early works have commenced, Erdene's management will take a number of factors into consideration prior to the commencement of full construction.  Most importantly, the exploration successes generated during the Covid-19 development slowdown have provided an opportunity for a higher volume operation.  In addition, the anticipated risks of transport delays related to the pandemic (especially on the China border), rapidly rising costs and supply chain uncertainty will be assessed in regard to establishing a start date and anticipated first gold pour (18 months after the construction commencement).

Altan Nar: This carbonate base metal intermediate sulphidation prospect is similar to some of the world's largest deposits, such as Fruta del Norte and Rosia Montanna. Located 16km north-west of Bayan Khundii (on an all-season road), Altan Nar has an indicated gold-silver-lead-zinc resource containing 318,000oz of gold, and an inferred resource containing 186,000oz (both at 1.9 g/t).

Erdene is the leading explorer in an untested portion of the prolific Central Asia Orogenic Belt (CAOB), host to some of the world’s largest gold and copper-gold deposits.

Erdene is the leading explorer in an untested portion of the prolific Central Asia Orogenic Belt (CAOB), host to some of the world’s largest gold and copper-gold deposits.